Victor Murakhovsky: "During the events in Crimea, the world saw a new quality of the Russian army" 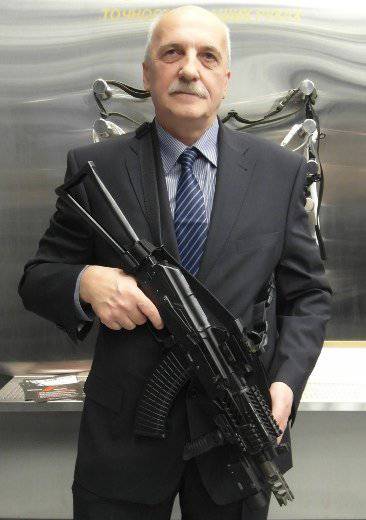 About the events of recent weeks, about how the Russian army has changed, we are talking with one of the leading domestic military experts, the chief editor of the information and analytical magazine Arsenal of the Fatherland, Viktor Murakhovsky.


- Viktor Ivanovich, how do you assess the actions of the Russian army in the light of recent events? Do you agree that at present the domestic armed forces are at a much higher quality level than even a year and a half ago?

- I evaluate the actions of the Russian army during the recent events as professionally organized and qualitatively implemented. Without a single shot and the victims completed all the tasks. Moreover, in some cases, only the self-control and professionalism of our servicemen prevented a sharp exacerbation of the situation.

Even in the external "picture" broadcast by the media in the course of recent events, the naked eye can see positive changes in the appearance of the Russian army compared to what the country and the world saw just two or three years ago.

If we talk about the operational-tactical component, then experts note the implementation in practice of some advanced concepts of the network-centric warfare, which until then had been considered the prerogative of only the American army.

- That is, it can be said that those events which we witnessed will be studied in military schools not only in Russia?

- Definitely. Both our allies and our western "partners" (as President Putin calls them) will study the military component of past events very carefully. And for us, this is the first experience of the practical implementation of those techniques and actions that were practiced in the course of classes, exercises, surprise checks of the combat readiness of the troops over the past year and a half.

- Viktor Ivanovich, one of the main heroes of the Crimean events were our Tiger armored vehicles, but the previous leadership did not want to acquire them. The bet was made on "Lynx". If there were Italian armored cars there, then we would now hear that the supply of spare parts for imported equipment was stopped. The same goes for the Centaurs and other cars. That is, Shoigu’s and Rogozin’s bid for domestic cars fully justified themselves.

- After the change in the leadership of the Ministry of Defense, the policy on import of weapons and military equipment returned to the mainstream of reality. At the beginning of December 2012, the Expert Council of the Chairman of the Military Industrial Complex under the Government of the Russian Federation, Deputy Chairman of the Government of the Russian Federation D.O. Rogozin was presented a report "Russia as an importer of armaments: challenges and opportunities" (see here sovetvpk.ru/files/1.pdf), in the preparation of which I took part. One of the key findings of the report was: “The import of weapons for the needs of the RF Armed Forces is fraught with significant risks both for the defense of the country and for the functioning of the military-industrial complex. This issue is so important that the current practice of making departmental, often voluntarist, decisions on the import of weapons and military equipment completely outlived. " The leadership of the defense industrial complex and the Defense Ministry generally agreed with the conclusions and proposals formulated in the report, which led to a number of practical decisions on the normalization of imports of weapons and military equipment and the development of domestic production.

- And how do you think the situation with the Mistral UDC will evolve?

- I think that the contract for the supply of two ships by the French side will be completed on time. Probably, the Russian side will refuse the option for two more ships.

- Viktor Ivanovich, judging by what we saw earlier, the proposed concept of light and medium compounds has fully justified itself. Given that the Russian troops in the Crimea did not have a single tank.

- The concept of light, medium, heavy compounds equipped with an appropriate set of military equipment was originally based on military-scientific studies of domestic specialists. The physical and geographical conditions of the region and the operational and tactical features of the measures did not require the use of heavy weapons and military equipment. Units operated on light and medium armored vehicles, military vehicles, with the support of the army aviation. High mobility has largely ensured the successful completion of tasks.

- Viktor Ivanovich, it is probably worth noting that in the near future rearmament of the Russian army will take place, and its capabilities will increase even more?

- The peculiarity of the current State Armaments Program for the period up to 2020 is that the mass re-equipment of the ground component of the general-purpose forces (Ground Forces, Airborne Forces, Marines and Coastal Forces of the Navy) is planned for the period after 2015.

By this time, uniform standardized platforms of a new generation of light, medium and heavy categories, artillery complexes, sets of individual combat equipment, means of automated command and control, etc. should be developed, tested and ready for mass production.

In the interests of mass production of new-generation weapons and military equipment, a large-scale technological modernization of the corresponding defense enterprises is under way. According to the plans, by the end of 2020, modern models of weapons and military equipment should be in the category of armored combat vehicles - 82%, artillery systems - 79%, missile systems of the Ground Forces - 100%, multipurpose vehicles - 72%.

Ctrl Enter
Noticed oshЫbku Highlight text and press. Ctrl + Enter
We are
Interview with Viktor Boyarsky: "Icebreaker is an exhibit in itself"Military reform as an integral part of the security concept of the Russian Federation: Systematic dynamic assessment
Military Reviewin Yandex News
Military Reviewin Google News
131 comment
Information
Dear reader, to leave comments on the publication, you must sign in.