March 25 2014
118
At the end of last week, in the camp of the self-proclaimed Ukrainian authorities, between their individual representatives, not just a black cat, but a weighty black “pig” ran. We are talking about withdrawing from the political association “Batkivshchyna” - the party that actually got its hands on all the levers in the Verkhovna Rada - such a gentleman as Andrei Paruby. On his exit from the "Batkivschyna" reports Ukrainian edition http://gazeta.ua/.


For those who do not know, Andriy Paruby is, as he calls himself, the 10 th secretary of the National Security and Defense Council of Ukraine (NSDCU). And this post Mr. Paruby received for those "services" to the Fatherland, which are associated with the coordination of actions of the Maidan. In fact, during the riots in the center of Kiev, Parubiyu was prepared for the role of a man who had to crawl out of the skin so that the maydaniruyu crowd together with pravosekami (representatives of the "Right Sector") continued to maydanirovat to the "victorious end". The crowd really namaydanuyu "for glory" - more than a hundred dead, thousands of wounded, burned buildings, the president took refuge in the territory of a neighboring state - in general, complete devastation and in closets, and in the minds ... That's what Andrei Parubiya and "awarded" secretarial rank - they say This one knows exactly what to do with the security of Ukraine.

Of course ... How can he not know if behind such backs there are such prompts, like, no less, the special services of the USA ...
A statement about the actual recruitment of Parubiya overseas special services in an interview (in particular, the information appeared on the website ITAR-TASS) was made by General Alexander Yakimenko, who served as the head of the Security Council of Ukraine from the beginning of 2014 until the “victory” of the Maidan (until the last decade of February) - just over a month. It is noteworthy that as soon as the power in Ukraine was seized after the coup d'état, Yakimenko was immediately put on the wanted list in connection with the general’s alleged “criminal orders on sniper execution of the Maidan”. Yakimenko himself declares that for sniper shots weapons in the center of Kiev, it was Parubiy, because, being the commandant of the Maidan, Parubiya let through all the information about the reinforcements of extremist groups, including armed men, who arrived to realize the goals and objectives set by the true puppeteers.

It would be possible to write off the words of Alexander Yakimenko to a kind of attempt to reconcile information accounts with the man who actually declared war on him, however, information about Parubiya’s connections with representatives of the American side began to appear even when behind the means of financing Maidan the “opposition” often began to drop in at the American Embassy . After US State Department officials (namely, Undersecretary of State Victoria Nuland) themselves announced the allocation of five billion dollars to Ukraine "for a democratic future", the involvement of the entire current Ukrainian "top" in foreign tactics and strategists because of the "big puddle" obvious.

Moreover, Paruby has recently allowed himself such rhetoric against the Ukrainian people, which can be afforded either by a violently obsessed person, or a person who feels some kind of support behind his back (although in the case of Mr. Parubiy, these hypostases are probably not contradict ...). One of the recent pearls Parubiya:

Those who work in Russia will not be our allies anyway, so we don't give a damn about their interests.

So Parubiy responded to the remark of the "Prime Minister" Yatsenyuk not to get excited with the possible introduction of a visa regime with Russia. Yatsenyuk said then that millions of Ukrainians work in Russia, and this may affect both their interests and the economy of Ukraine.

So here. After such obvious contradictions with Mr. Yatsenyuk, Parubiy decides to leave the so-called all-Ukrainian union “Batkivshchyna”. For reference: the chairman of the “Batkivschyna” de jure is Yulia Tymoshenko, who once again declares her presidential ambitions; Chairman of the political council of this, forgive, my God, “All-Ukrainian Association” - namely Arseniy Yatsenyuk.

If Paruby leaves the political coalition, in which the “prime minister” Yatsenyuk is one of the main actors, then this means only one thing: Ukraine can again “strike” in a hot divide of power. Although why "can"? One gets the impression that it is generally such a Ukrainian “fun” that works in permanent mode, and in fact does not stop for a minute.

What goals can pursue Paruby when leaving the "Batkivschyna"? And is this the purpose of Paruby himself? One of the predicted goals is related to his ties with “Svoboda”, because it was Mr Parubiy at the age of twenty (in 1991) who was one of the founders of Freedom. Another co-founder is also well-known - this is Oleg Tyagnibok, who did not receive significant posts in the new “power”. Paruby, whose sentiments meet all the canons of overt radicalism, apparently wants to distance himself from the “moderate” in the person of Yatsenyuk. Or vice versa: Yatsenyuk forces standing over him can already try to distance themselves from Parubiy and others like him to disown radicals. 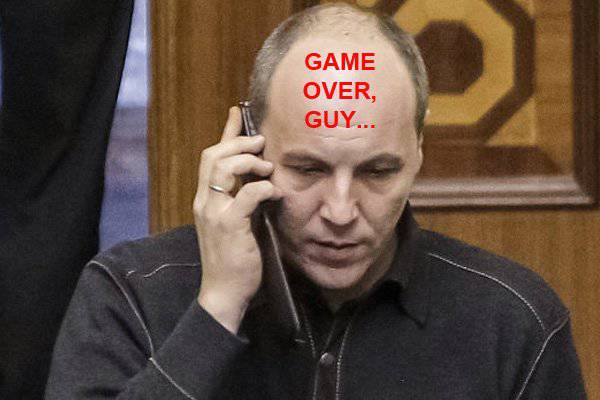 For obvious reasons, some one force (either radicals or “moderate”) will be pointed out by the puppeteers at the door after the elections of May 25. From the point of view of the henchmen of the “new” authorities, it is better, of course, to get rid of such “thugs” as Paruby associates, until these gentlemen have not yet brewed their own (uncontrollable “from there”) mess. And if so, then the role of the same Parubiya seems to be played.

But, as the German Bundestag deputy from the “left” wing, Gregor Florian Geesy, said not so long ago, if the fascists get at least some chance of power, then they themselves will never refuse from this chance themselves. And this means that Paruby is ready to try his luck and to rely on those who are still standing on the Maidan, to rely on radical formations from which he emerged himself, and with whose help he turned out to be in the NSDC today. If it is the second scenario that works, then the Americans themselves will have to do something with all these “parables-Yarosh-grains”, otherwise the project of a financial rate on “moderate” may not work.

But Ukraine itself has nothing to choose from: that Yatsenyuk, Yarosh, Paruby, and Klitschko - they are far from the interests of ordinary Ukrainians. The task of the “moderates” is to sell Ukraine to Uncle Sam at a price similar to himself. The task of the radicals is to build in Ukraine the Bandera camp, which itself will suck all the juice from the country, the economy and the people, plunging it into the Middle Ages.

Can go to the vanguard of Tymoshenko? Well, against such a background, she has a definite chance, if the arrest with the West continues. But again, what will change for Ukraine? Mrs. Tymoshenko has already had many attempts to make the life of Ukrainians better, but each time it turned out only “more fun” ... Considering that today's Radu, Yulia called it “a gadyushnik” (and in the Rada, which is remarkable, it is her “Fatherland” that rules) that, in the best case, Ukraine and after 25 May 2014, a variation under the control of "goose (well, not the swan ...), cancer and pike." Perhaps a variation with the next tire-pyrotechnic "show."