March 25 2014
151
На ресурсе USAwatchdog.com A new article by Comrade Greg Hunter was published, presenting a review of the statements of Jim Sinclair, a well-known gold expert (literally: Sinclair is an expert on investing in gold). The expert believes that Vladimir Putin has prepared a "nuclear bomb" for the West. Along with this, Sinclair speaks almost in an artistic style: “Welcome to the past — into the cold war.” 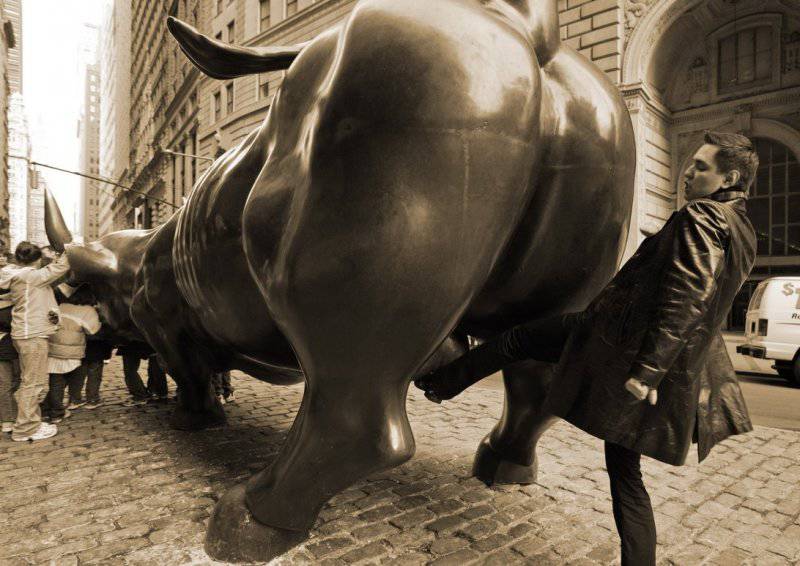 This bronze statue stands in Bowling Green Square, next to Wall Street. "The attacking bull" is often referred to as "The Bull on Wall Street"

The world famous gold expert Jim Sinclair, writes G. Hunter, was worried about the crisis in Ukraine. Sinclair declared: “Welcome to the past - to the cold war ...” In his opinion, the cold is about to become hot.

Who started this war? It looks like President Obama, Sinclair believes. According to the gold expert, it was the US president who brought the spirit of the Cold War back to the world, changing diplomacy and outrageously threatening - instead of looking for solutions. Such behavior in the geopolitical arena, Mr. Obama, obviously, considers normal.

Sinclair mentions the referendum in the Crimea, where the "overwhelming majority" spoke "in favor of joining Russia." Still, officials in the West say that this is "illegal or illegitimate" (illegal or illegitimate). At the same time, to put it this way, the West denies that in reality the new Ukrainian government was created as a result of a coup d'etat. Saying so, someone leads us "to the brink of war," says the expert.

In his opinion, the war can begin at any time. We have “two objects” that are armed and “gaze at each other with great hatred.”

Gold specialist is very concerned about such aggressiveness.

On possible US sanctions against Russia (for example, such as excluding a country from the international payment system SWIFT), Sinclair says that the Society for Worldwide Interbank Financial Telecommunications may well create "almost prohibitive" difficulties in doing business by blocking bank transfers. That is why the BRICS countries are developing their own payment system. Thus, the West creates a competitor for itself, and this is a mistake, says Sinclair.

In addition, Europe should not forget that Russia supplies it with gas.

Finally, a lot of European and American corporations are now working in Russia.

The expert believes that the sanctions against Russia are about the same as a man’s shot in his own leg.

In the meantime, Russia can accept any currency for its oil and gas. She fights, Sinclair notes. She shows her teeth. And the monetary response of Russia will make energy in the world cheaper.

In addition, Russia can respond to at least in order to influence the US dollar exchange rate. Russia will prevail, the expert believes. It can even plunge the American economy into a crisis, a collapse. Actually, there is no such question at all, the analyst believes. “Putin does not need a nuclear bomb,” he notes. “He has a nuclear economic bomb that he can drop at any time.”

In this opinion, Comrade Sinclair is not alone.

17 March under the heading "News business "broadcasting company "BBC" a Robert Peston note was published on the “bear raid” on Wall Street. This, of course, about the Russians and their strategies. And at the same time about Russian friends - the Chinese.

The author of the article notes from the first words “cynicism”, which now has a place “in relations between Russia and the USA”. This cynicism is the most “played out” because of the “Crimean crisis”. However, the roots of this phenomenon go deep into history. Paeston also writes that the triumph of capitalism over communism is by no means the final battle for power between the two states.

Hank Paulson, former US Treasury Secretary, spoke about the depth of distrust between these countries. The interview was previously given for the BBC documentary filmed by the author. The film was dedicated to how the Chinese have fooled the whole world. Paulson’s statements were not included in the film, because they had no direct relation to him. But they gave a visual idea of ​​the complex relations between Washington and Moscow.

The meaning of the statements is that China lent the United States (in the form of buying securities) so much that Mr. Paulson believes that the government and the Fed need to do everything possible to ensure that China’s investments in US debts do not decrease.

All this is understandable, but what happened next. Began a thriller dedicated to international politics. Mr. Paulson met with someone authorized (the names are not called). And this man told him that the Chinese had received a message from the Russians. A very simple message: let's consolidate and dump American securities, let's throw them out to the market.

No, the Chinese are not going to do it right away. However, that authorized person became very scared. It shocked him. Is this what the Russians decided to come to terms with the Chinese - and shake Wall Street, and to the maximum? And then they will go even further - and finally destroy the financial health of the United States?

So far, Paulson asserts, this partisan offensive of the Russians and the Chinese has not happened.

Paulson makes his conclusion. The possible collusion between Moscow and Beijing explains why President Obama shows little desire to understand Putin’s decisions on the Crimea.

According to the expert, the USA is harder than the Europeans insist on imposing sanctions against Russia because the United States, unlike the EU, has only a slight dependence on Russian gas and oil.

Thus, Western economic experts are not of the last magnitude clearly warning the Washington hawks: do not meddle with the Russian bear. Each planned American step can cause two advanced real steps of Moscow and another one and a half catching steps of Beijing ...

Observed and translated by Oleg Chuvakin
- especially for topwar.ru
Ctrl Enter
Noticed oshЫbku Highlight text and press. Ctrl + Enter
We are
Results of the week. "And we are here, you know, all indulge in buns ..."How the US dollar turned into a big financial mystification
Military Reviewin Yandex News
Military Reviewin Google News
151 comment
Information
Dear reader, to leave comments on the publication, you must sign in.