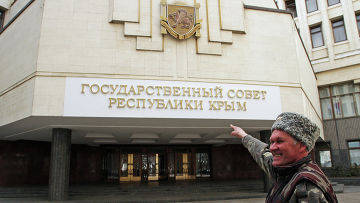 Moscow did not have such a plan as the provision of military pressure on Ukraine and the annexation of the Crimea. Although Ukraine is extremely important for Russia, both militarily, politically, economically and strategically, as well as historically, Moscow accepted the independence of Ukraine, as well as the fact that the Crimea is not very pleasant for Russia, that Crimea is part of Ukraine. The ideal solution for Moscow was to maintain a favorable relationship with Kiev. The prerequisite of such relations is the non-entry of Ukraine into any institutional union with the West and its non-alignment with NATO or the EU.


The transformation of unitary Ukraine into a federal state has always been a project that Russia may have wanted, but did not represent as a condition for the successful development of relations with this state.

But the European Union did not appreciate what Ukraine means for Russia, and the authorities that emerged after the popular unrest in Kiev, having chosen the way of cooperation with the Ukrainian fascists, who carry the meaning of political suicide for Ukraine, did not intend to reckon with Russia. Whereas the fact that the negotiations between Ukraine and the EU revealed, as well as the negotiations between Ukraine and Russia before the start of the popular demonstrations in Kiev, was that Russia was ready to pay a higher price than the EU. The failure to comply with the terms of the agreement concluded in order to put an end to the protests in Ukraine, the overthrow of the incumbent President Viktor Yanukovych with the support of France and Poland, and the new government hostile to not only Russia but also Russians, caused the break in ties with Moscow. These events are the result of EU strategic short-sightedness. To provoke Russia, without having counted the reciprocal step that Moscow can do, and without having the power to prevent it, is in no way a rational decision.

The EU is trying to get out of the economic crisis. At the same time, Scotland and Catalonia are on the threshold of a division, and this situation creates pressure on the EU from the point of view of the future of this union. At the same time, many EU countries, primarily Germany, depend on Russian energy resources. Taking this into account, Moscow made a very convenient move and annexed Crimea in the spirit of the politics of the past centuries. The process that ended today with the annexation of the Crimea, beginning with the onset of the crisis in Ukraine and the coming to power of the forces with which the EU entered into an alliance, took place in the context of the EU’s strategic blindness and US strategic limp, trying to clear the tactical disaster provoked by the EU. Being in the process of retreat with the realization that the unipolar world order came to an end and searching for a new place in the world with the Asia-Pacific Center, Washington made it clear that in the atmosphere, when in response to this step of Russia, the EU member states act reluctantly on economic embargo, the United States does not want to intervene unnecessarily.

Obviously, the EU will continue to take steps that will deepen the crisis in Ukraine. The adoption of Ukraine in the EU to guarantee its territorial integrity will not solve, but will only aggravate the problem. Meanwhile, on the condition that Ukraine remains a kind of “buffer country” between the West and Russia and moves from a unitary system to a federal one, Moscow, which annexed Crimea, can return the peninsula to Ukraine.

At the present stage, it is necessary to avoid any steps that may lead to an increase in tension. The relationship between the EU and Ukraine should be considered separately from the EU membership procedure. It is necessary to urgently hold early general elections in the presence of international observers, thanks to whom Ukraine will be cleared of the power of fascism. It is necessary to ensure the participation of Crimea in the voting in the Ukrainian elections. The new parliament, which will arise as a result of the elections, should adopt a new constitution.

Ctrl Enter
Noticed oshЫbku Highlight text and press. Ctrl + Enter
We are
Russia, Turkey and the "Crimean Question"Situational analysis of the death of the MH17 flight (Malaysian Boeing 777), made on the basis of engineering analysis from 15.08.2014
Military Reviewin Yandex News
Military Reviewin Google News
47 comments
Information
Dear reader, to leave comments on the publication, you must sign in.