March 25 2014
171
NATO Secretary General Anders Fogh Rasmussen made a number of very serious statements. True, other paragraphs of his speeches seem just funny. However, others sound quite pragmatic. The commander of the North Atlantic alliance simultaneously warns and frightens Moscow, and also explains to candidates for NATO membership that their time has come. A few months later, wholesale negotiations will be held with Georgia, Montenegro, Macedonia, Bosnia and Herzegovina. The rush is caused by the rapprochement of the Crimea with Russia. 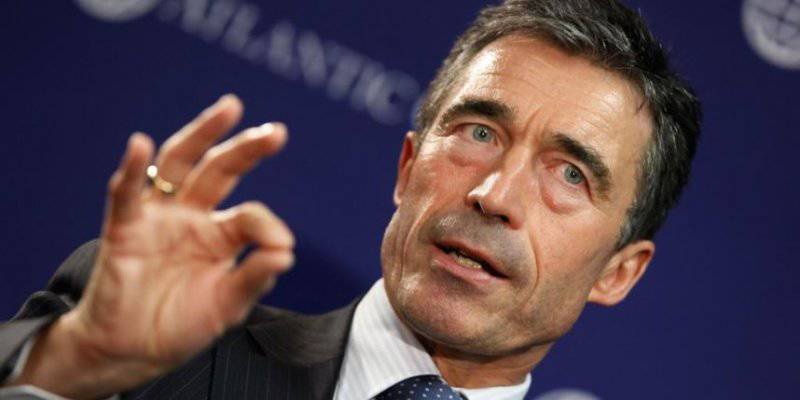 A week ago in Brussels, Rasmussen condemned Vladimir Putin’s actions aimed at including Crimea into the Russian Federation. “I condemn the announcement by President Putin of the inclusion of Crimea into the Russian Federation,” the Secretary General said. On behalf of NATO, they made a statement that the alliance does not recognize Crimea as part of Russia. Why does not recognize? And because, according to Rasmussen, Russia has neglected calls to take "a step back in accordance with the norms of international law and continues to descend down the dangerous path." I mean, of course, the corresponding appeals to Russia of the West, primarily the United States.

The Secretary General said: “Russia continues to violate the sovereignty of Ukraine and its territorial integrity, continues to blatantly violate its international obligations. There can be no excuse for pursuing a course of action that can only deepen Russia's international isolation. The annexation of the Crimea is illegal and illegitimate, and the NATO allies do not recognize it. ”

Damn it with her, with "illegality", which in the West means ordinary "disadvantage." What is unprofitable to the West in the political and economic sense, the West immediately declares it illegal. This is an axiom. The double standards of the USA and the EU are applied very widely, this is no secret to anyone. And the NATO bloc, once created to counter the “aggressive” USSR, is downright obliged to rebel after the occupation of the ancient Ukrainian Crimea with cunning Muscovites. So it’s understandable: “The annexation of the Crimea is illegal ...” But why is it illegitimate? Almost 100 percent who voted in Crimea were in favor. What voted under the guns? No, not really. Is the people out there crazy and does not trust their own will? Also no. Maybe Rasmussen is too lazy to look into the explanatory dictionary and see the meaning of the word "legitimate"? It is not at all synonymous with the adjective "legitimate"!

However, the word Rasmussen, of course, understands correctly. No wonder he used two terms together. He means the entire Ukraine For the whole of Ukraine (more precisely, for the “official” Kiev and for the new Rada) the Crimean referendum is “illegitimate”.

But here's the catch: the NATO Secretary General cannot judge this. In order to make such statements, it is necessary to have the results of at least an all-Ukrainian referendum on, say, the annexation of the Crimea or other territories and regions to Russia. It would be naive to believe that all Ukrainians will vote today against Moscow. Rasmussen and understands this perfectly. That is why it "pushes" the speech, thereby giving out your fear.

Well, the will of the population of the Crimea for Rasmussen, of course, does not matter. People like the NATO Secretary General are hardly concerned about the fate of, say, the Kosovo Serbs. Or even the fate of the Yugoslavs after the splitting of the once great country. The life of people in post-war Libya also hardly saddens him. Nor are the United States worried about the ugly children born in Iraq after American troops used depleted uranium there. West everywhere leaves itself devastation, disease, hunger, collapse and decay. Chaos is his goal. The world must rule it, the West. All those who raise their heads, who strengthen and grow, must be punished and weakened. There are no exceptions to this rule. Ukraine, to which the West had (and has) its own types (anti-Russian, it is necessary to clarify, associated with commodity policies), is therefore considered to be the “independent” state, which must fully and completely serve the West. And serve in such a way as to weaken Russia. Serve against Russia, in short. So, there are no legal and legitimate referenda on parts of Ukrainian territory for the West by default.

In his next public statement, the NATO secretary general said that Russia is behaving not at all as a partner of the North Atlantic Alliance: "Russia behaves as if it is not a partner, but an opponent of NATO." To mitigate such harsh words, the Secretary General noted that the alliance is in favor of a dialogue with Russia in resolving controversial issues, for example, on the status of the Crimea.

Also an interesting statement. For Russia, the issue of Crimea is not controversial, so the Secretary General here rhetorically distorts. And it’s not worth talking about “not a partner, but an opponent of NATO”. Partnership with NATO, as shown историяIs nothing more than fun for the West. Geopolitical fun, which was quickly stopped when they realized that Russia seemed to have grown out of children's toys.

Finally, Anders Fogh Rasmussen announced in Brussels that the Ukrainian events could accelerate the rapprochement of the candidate countries with NATO. “I see it in a strategic perspective,” he noted. When? .. It turns out that this perspective, in the words of one Russian publicist, “is near at door”.

Already at the upcoming NATO summit in Wales, everything will become clear. The Secretary General said: “We need to move forward and reflect the progress that has been made, at least in some of the candidate countries.” At the end of June, the NATO foreign ministers will consider the issues of compliance of Georgia, Bosnia and Herzegovina, Montenegro and Macedonia with the conditions for joining the Alliance. Rasmussen did not even mention about the well-known “territorial dispute” of Georgia with Russia, because of which NATO by no means can accept this sunny land of wine-makers into their cohesive ranks that they do not accept unresolved territorial problems. Because of the Crimea, everything somehow changed quickly. History is literally written every day in front of the whole world. By the way, this was noted by the NATO Secretary General.

According to him, which he said no longer in Brussels, but at the Brookings Institute (USA), events in Ukraine and the reunification of Crimea with Russia changed the world. What kind of changes are we talking about? It turns out that henceforth relations between Russia and the North Atlantic Alliance can no longer be “business, as usual.” But every cloud has a silver lining: the Crimean crisis rallied the great ones: the USA and Europe. We read between the lines: the West re-emerged a common enemy, as in the days of the Cold War. This enemy is the same Russian. The same Russians, whom Western commentators stubbornly continue to call "communists."

Moscow, according to Rasmussen, is engaged in “revisionism” and applies a policy of force, ignoring the legal international mechanisms that have been developed for decades. With sadness in his voice, the Secretary General said: “We thought that this behavior is history. It turns out not yet. "

Europe and the United States — that is, those who, apparently, uphold good and justice in the world through NATO institutions preaching peaceful bombardments and buffer zones (well, yes, “good with fists”) - now must rally. Consolidation of the West (obviously, in the face of the aggressor) NATO Secretary General considers the only way to ensure security.

Thus, A.F. Rasmussen made a startling historical discovery. It turns out that NATO missed some fact, namely that the unipolar world ceased to exist. Western political scientists and analysts have long been writing about this one article after another, but apparently Rasmussen does not read newspapers and news on the Internet has no time. China is strong enough, India is growing, and Russia is deserving recognition as an active and influential foreign player. Rumor has it that by 2020, the United States will not dominate the planet at all.

The economic crisis, the constant criticism of President Obama by his own people, public mistrust of the authorities in Britain, France, Spain, Italy and other so-called “developed” countries, frequent vetoes in the UN Security Council imposed by Comrade Churkin, the recent slobber of Samantha Power’s hysteria, a Syrian issue with chemical weapons, the Crimean referendum and the overt fascization of Kiev, which Moscow doesn’t approve of and for which the dirty hands of Washington and Brussels are visible, as well as Victoria Nuland’s phone call to the EU - all this speaks not only of force uu Russian influence in geopolitics, but also that the consolidation of the West is (at least partly) a large and fragile myth. The West simply has no money for this consolidation: after all, the NATO budget is bursting at the seams ...

Ctrl Enter
Noticed oshЫbku Highlight text and press. Ctrl + Enter
We are
Results of the week. "And we are here, you know, all indulge in buns ..."Results of the week. “And the Crimea of ​​the Fatherland is sweet and pleasant for us!”
Military Reviewin Yandex News
Military Reviewin Google News
171 comment
Information
Dear reader, to leave comments on the publication, you must sign in.