March 24 2014
49
Naturally, any photo can be properly signed and create the desired impression. However, in every joke there is always some joke. 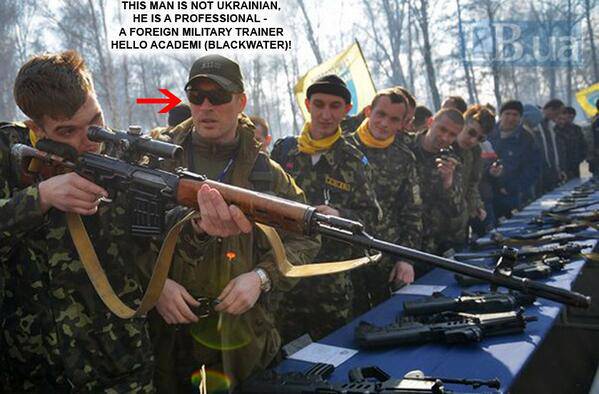 If the caption on the photo is nevertheless true, then it becomes clear why several experts from private military companies arrived in Ukraine a few weeks ago. Or at least some of them. Given that there are Ukrainian-speaking enclaves in the North American continent, it is not a problem to find a few dozen specialists with the native language. And cannon fodder to prepare - this is precisely the work of PMCs. Contrary to generally accepted notions, military companies are engaged in far from only direct combat activities. Rather, even - not at all to her. They are organizers, scouts, instructors.

And as such, their arrival quite fit into the general logic of the events - the CIA / SBU immediately after the shooting at Institutskaya thought about what to do with the crowd of restless self-defenders - let them go home - more expensive. By the way, the fact that hundreds, controlled by Parubiy, went to the National Guard, it is also completely in line with one story that Alexander Yakimenko described, claiming that it was Parubiy who made a deal with the Americans. It is logical that it is his fighters who become the fighting force that the organizers of the coup d'etat rely on.

The second series of the revolution with the shooting of the first generation is near. You need to have on hand their attack aircraft who can do the dirty work. It is possible that the instructors are preparing them for this kind of work - there is no hope for the police, and no one is afraid of it.

True, the question remains with the "Right Sector", which is also actively engaged in its own construction and is not very eager to obey Parubiy or go to a future meat grinder. There is information that part of the "Right Sector" from among the youngsters recruited on the Maidan in Kiev and maydan in regional centers, shot down in the usual semi-bandit assault troops, which are entertained by looting and guiding the new "ordnung" in the territories. However, a small part - no less than half a thousand people - is already taking quite intensive classes in the western regions, and near Kiev - in small groups of 15-20 people. And foreign instructors also work with them.

It is possible that before us the separation of roles takes place - Parubiy and his fighters are preparing for restoring order inside Ukraine, and Yarosh and his terrorists outside its borders and for some special tasks that the National Guard cannot fulfill.

Therefore, the National Guard under and created so numerous. First, to prepare the ground for the elimination of spontaneous freemen. Anyone who obeys - will enter the Guard, who does not want to play by the prescribed rules - will go under the knife. On the 24 area, the 15 thousand of the National Guard are just 600 people per area. Not much. Although for the suppression of speeches - it is quite enough, but now for the elimination of the "wild" gangs is clearly not enough.

Secondly, it is impossible to prepare professionals in a short time, and therefore in the emerging rather difficult revolutionary and post-revolutionary conditions, the loss of personnel will certainly be higher than normal. There will be deserters, and losses in clashes with unorganized gangs, so 15 thousands is only for a start. The total number of the National Guard under the law in 30 thousand - is quite adequate to the tasks involved.

Apparently, the National Guard under training camps will become a kind of entrance yard through which a considerable number of young people and the unemployed will pass - especially since it will soon become almost the last place in which in Ukraine it will be possible to receive a salary. So the lack of personnel just can not be afraid. Therefore, there is no big reason to take care of the personnel.