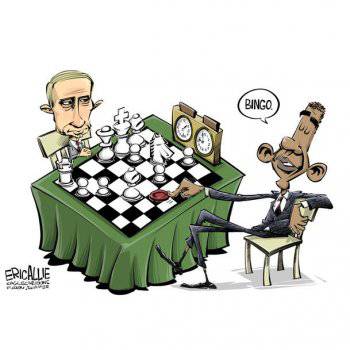 In this article I want to try to analyze the next steps of Russia in relation to Ukraine. There is no doubt that these steps are planned. But what exactly is Putin planning to do in this party? Nobody knows that. Opinions diverge dramatically. Some say that everything will be limited to the Crimea, others - that Putin will join the Southeast, and others - that he will take all of Ukraine. Let's put all the facts together and try to put together a mosaic of mosaic tiles. We will try to see the alignment of pieces on the board and possible moves of opponents.


So, today's position of Russia. Putin plays black, because the first move was not for him.

The first move was made by the Americans. They, in good old habit, started a color revolution. In general, it is expected and not new, although the move itself is strong. The Maidan passed "with a bang," the people who were fully controlled by the States were brought to power. The former government was disorganized, panicked and began to scatter. Checkmate. It would have been if the master of this game had not been sitting on the other side of the table.

Using the emerging window of powerlessness, Putin delivered a blow that no one expected. He took the Crimea. That is the main goal of the Americans.

If someone did not understand, the main goal of the “squeeze” in Ukraine was to squeeze out the Black Sea fleet from the Crimea. Nobody was going to turn Ukraine into a new Poland, nobody wanted to accept it into NATO. It was necessary that the new authorities denounce the agreement on the fleet and complicate its life as much as possible until 2017. The second goal was to control the gas pipe. Well, the destruction of Ukrainian enterprises after signing an agreement with the EU, the termination of cooperation between Ukraine and Russia in the military, industrial and industrial sectors, the complete subordination of the country's economy to international financial structures is a bonus.

So, Russia has struck and in fact won the battle. The fleet remains on its bases, but now the bases are Russian.

However, the game did not end there. Although the main goal of the Americans has become unattainable, Russia has driven itself into a very difficult position.

First, the Crimea. It does not have a land border with Russia and depends on Ukraine in critical areas - water and energy supply. If with the delivery of goods everything is solved, and even the energy supply can somehow be provided, then water is a problem. In this matter, he is vulnerable and dependent on Kiev.

Also we must not forget that the Crimea is a resort. The blockade of road and rail links with Russia and the ban on Ukrainians from entering the Crimea can reduce the number of tourists at times. And this will greatly affect the incomes of Crimeans. And this is a problem.

Secondly, Transnistria. The new authorities will definitely not show any loyalty to the Russian citizens in this republic and will block her. What is already happening.

Thirdly, the same gas pipe. Now it is not under our control, and therefore the West will take control over it. Control over the pipeline can be for the United States compensation for the defeat in the Crimea.

Fourth, there is a high probability. that the loyal Russian population of the South-East of Ukraine will be subjected to repression. And Russia cannot allow this for image and moral reasons.

These are the negative factors that Russia has encountered today. And these issues need to be addressed.

If someone thinks that the grandmaster, playing with black pieces, does not see these layouts, he is mistaken.

But seeing the alignment and seeing a way out of the situation are two different things. What is the way out?

The solution that solves all the problems at once is to bring the loyal Russian government to power in Kiev. And not just bringing to power, but also securing this loyal behavior for a long time.

Someone may argue that a solution could be the accession of the whole territory of Ukraine to Russia. But it is not. Think about how much money Russia will have to spend to raise the standard of living of the Crimeans to the all-Russian. What means will be spent on infrastructure projects. What funds will be invested in medicine, in education, in roads, in a bridge across the Kerch Strait, in repairing everything that has not been repaired for more than 20 years. In payments for social. guarantees and pensions for two million people, finally. These are gigantic amounts. On the scale - this is the second Olympiad! And that's only two million people. And what means will be necessary for forty three millions? What means will be discussed when it comes to the whole country? These funds will need to be twenty times more than for the Crimea. This is many hundreds of billions of dollars. And there is no such free money in Russia now. They are not in Europe either. They are not in the United States. And therefore we can safely say that there is no question of any joining of Ukraine. She will not join anywhere, neither to us, nor to the West.

So, we found the only way out. We need to bring to power the forces loyal to us.

I am sure that Putin sees exactly this decision. The question is how he will implement it. Let's look at the nuances that seem to get lost in the background News from the Crimea.

The first. You can see how the junta who has come to power rushes about in panic. Laws are accepted - and immediately abolished. People are changing in the regions and in the army. The shift is already in the third round! Some solutions contradict others. The population that once supported the Maidan, is already beginning to reject this power too ... Political chaos is brewing.

The States have no plan to continue the party. They hoped for mate in two moves, but the game suddenly turned into a positional confrontation. They understand that Putin is preparing something, but they do not understand what it is.

We made several distracting moves and confused the enemy. All these exercises, the concentration of troops on the border - this is a smoke screen. It was necessary to intimidate the enemy and sow panic. And this has already happened.

Further. Notice how the protest moods suddenly changed in the Southeast. If earlier the unorganized crowd chanted "Russia" and smashed the administrative buildings, now something else has appeared. Now began to appear posters calling for Yanukovych. He is asked to return and restore order. The organization of the protest was streamlined, clear leaders seemed not to become (more precisely, they ceased to “shine”), but the protests intensified.

Third. Protests across the region have become coordinated. In the Southeast, meetings began to be held on the same day in several areas at once. This disperses the junta’s strength, and it can’t have time to react everywhere.

Fourth. Russia has not recognized anyone who seized power and does not conduct any negotiations with them. What seems illogical ... The West insists on the negotiation process, but Russia is silent. This can only mean one thing. Russia knows for sure that the people who have come to power will hold out for a very short time, and there is simply no point in negotiating with them about something.

The fifth. No one in Ukraine stops the pogroms of gangster hundreds of Maidan. What is also illogical ... It seems that the people who came to power should understand that all this “guljapole” is very dangerous for them. The population is increasingly turning against the junta, and there can be no question of any victory in the elections under such conditions. But there is no reaction. And if any orders of the junta of the “disarm everything” type and others appear, such orders are sabotaged by lower levels of government. It is sabotaged. In fact, to firmly stop the atrocities of several hundred scumbags is a matter of one or two days. The same SBU, so zealously catching anti-Maidan organizers, could cope with it. But nothing is done.

The sixth. Videos began to appear, indicating the presence of well-armed and organized residents of the Southeast, opposing the junta, but not yet acting.

I sketched a few pieces of the mosaic, and now we will try to put together a whole picture of them.

It seems to me that the grandmaster’s plan is as follows. Now in Ukraine, discontent of the population with the new government is fomenting. Candid gangsterism and the incapacity of the junta forces a growing number of people to reconsider their views and political preferences. Against the background of the creation of lawlessness, the idea begins to take shape that, yes, the old power was not perfect, but it was better than today. And this thought will only get stronger.

When exactly the move will be made, I do not know. I can only assume that it will be before the election, until May 25. Yanukovych will return to Ukraine. He will respond to the call of the people. And the attack will begin on Kiev. Those “polite people” will seize the regions, Yanukovych will appoint in them the leadership of the organizers of the anti-Maidan, and the people will welcome it vigorously. "Golden eagle" and armed organized residents of the Southeast will begin to hard-clean the bandits. It will be publicly announced that the junta is outlawed, that any cooperation with it will be punished. A state of emergency will be introduced. An order will be given to the army, which is now simply withdrawing itself and does not play any role, to restore order in the country. Most of this army will consist of "polite people", although the armed forces of Ukraine, humiliated and angry, will also show themselves.

And then there will be elections. Yanukovych will not take part in them. The impetus for his loyalty to Russia and the fulfillment of the tasks assigned to him will be his money in Russia and the guarantee of his security to Russia.

Southeast will nominate its presidential candidate. This will be a pro-Russian candidate. And Ukraine will tie its fate with Russia for a long time, since the West will be the enemy of the new government, perhaps it will not even recognize it.

Somehow, I see further developments. Perhaps, I am mistaken in something, I lose sight of something. Still, I'm just an amateur, and the grandmaster plays for blacks.