March 24 2014
250
The last month I was almost convincingly and extremely persistently led to the idea that I was a damned Muscovite. A militant fascist and chauvinist, a criminal in front of the innocently slandered by me “sly” Ukraine and the main achievement for today of her, Ukrainian, statehood - Maidan. And today I woke up, looked news block on Euronews, then switched to CNN, took courage for another half an hour and gathered his thoughts and finally realized - I'm ready. I’m ready to sincerely bow my head to repent at least at Monica’s place, but at least on Maidan itself. I repent of myself personally and of all, I am sure, not yet overlooked katsaps. Repent and obey everything ...


First and foremost, forgive us for the fact that hetman Bohdan Khmelnitsky, instigated by false Moscow propaganda in 1654, made an alliance with the accursed royal satrapy. I know, or rather, I was opened to my eyes that at that fateful moment Ukraine was a prosperous and powerful country from sea to sea (it just skillfully hid its true size from its envious neighbor in the east), was in fraternal Union with Poland and under its peace-loving , the government, imbued with the spirit of good-heartedness, was one step away from complete extinction ... sorry, lost, from the final European integration.
But here we, Muscovites, excommunicated you from the long-awaited Europe for the first time in many centuries. And all the horrors of the gentry rule on Nezalezhnaya, which were so colorfully described by Senkevich and Gogol, so clearly was the cursed Moskal propaganda, so to speak - the forerunner of Russia Today and Kiselevshchina of 17-th century.

No, the real horror came just after the treacherous and despicable union with tsarism. Mean Russian tsars revived Ukrainian culture and writing, built cities in Ukraine, gently nurtured original writers and artists — Taras Shevchenko, Lesia Ukrainka, Nikolai Gogol — these are just a few names for which I sincerely apologize to the Ukrainian people and the revolutionary Maidan.
And for the vile royal "gifts" - the evil revenge of the Russian government and Russian people hating all Ukrainian - Sumy, Chernihiv, Poltava, Cherkasy, Kiev, Zhytomyr, Khmelnitsky, Ternopil, Rivne, Volyn regions of modern Ukraine free from Katsap's oppression, which were conquered in civilized neighbors-basurman and incorporated into Ukraine in 1654-1917. Forgive us, savages and barbarians, for the fact that the Russian soldier enslaved these lands from foreigners and gave him to you under the tsar’s decree, as if from a master's shoulder.

Of course, historical justice was restored a little in 1917-22. when the German-Austrian and Polish units returned to civilized Europe a large part of Western Ukraine and began the process of democratization of the local population from everything that lies badly and can be profitable. But most of Ukraine remained under our, Russian, oppression and continued to suffer and groan.

The new authorities were even more cruel and insidious - they gave in 1917-32. in the Ukrainian SSR Kharkov, Lugansk, Donetsk, Zaporozhye, Kherson, Nikolaev, Odessa region. For centuries these lands have been part of Russia, but we gave them to you as a herd of Trojan horses, in order to criminally multiply your economy and your republican budget, create powerful industrial centers of imperial oppression and planting of moskal, slave, spirit!

Forgive us for this, please! 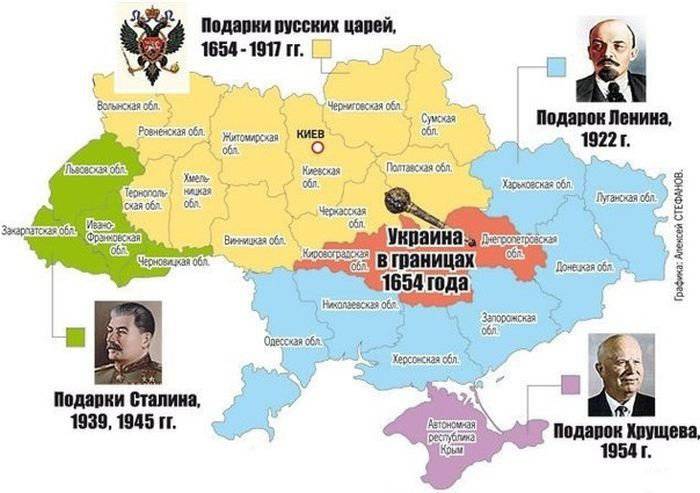 But that is not all. The number of criminal acts of my evil and envious to the Ukrainian sovereignty of the people is innumerable. In the 30 of the last century, we specifically organized the Holodomor - the terrible genocide of the Ukrainian people, killing millions of the best and most worthy sons of your homeland. To mask this inhuman atrocity, we entrusted it to Georgian Stalin and organized an even greater famine in the Urals, in the Volga region, in Kazakhstan, in order to kill many more Russians and hide our insidious plan from the court of History.

But we committed the worst crime against the Ukrainian people in 1943-45. As soon as the dawn of a new European integration over the long-suffering Ukrainian people in the form of the fascist liberators from the “Yiddish-commissar yoke” had barely dawned, the only honest Ukrainian guys and girls from the UPA and the first “Tresuba” began the racial purification of the native land from Jews, Belorussians, Russians and the Poles, as the red hordes of the conquerors "flooded with corpses" of the noble German national socialists near Moscow and Stalingrad, used disproportionately and excessively force under the Kursk and went to liberate your land from the German of the fascist scum.

More precisely, for us it was evil, and now, thanks to the few Russian truthful media like Dozhd and Ekho Moskvy, thanks to your UNIAN-TV, I finally learned that they were liberators, brothers arms glorious "forest brothers", the last hope chained in the chain of the Slavic brotherhood of Ukraine for Europeanization, colonization and racial "New Order".

Today I realize with bitterness that in the summer of 1943, we had to make peace with Germany reeling from blood loss and leave you under the wise hand of the Third Reich. You yourself would certainly have freed yourself. Your squads of thugs ... sorry, the brave UPA warriors were such a formidable enemy that whole German divisions dragged in horror at the sight of at least one Ukrainian regiment. German generals were so afraid of the brilliant strategists and tacticians of the forest war of the type of Kononts, Shukhevych and Bandera, that they did not even dare to mention their military exploits and loud victories over the old men, women and children in Belorussia and Volyn, in Babi Yar and near Krakow either respect for the former comrades of arms, or for fear of the Nuremberg Tribunal.

But - we came. With the battles crossed the Dnieper and an unstoppable fiery wave rolled on, to Lviv, Warsaw and Berlin.

It was a difficult time for Ukraine. Thousands of notorious Ukrainian warriors - thugs and murderers fell from the Moskal hand, and instead of them, behind the fallen iron curtain, the criminal Stalinist regime was restoring not only Russia, but also your homeland that had not become again a part. In parallel and immediately after the war, the tyrant Stalin criminally attached to you Lviv, Ivano-Frankivsk, Chernivtsi and Transcarpathian regions.

Having destroyed and sent the best forces of the Ukrainian people to Siberia, we have been shitting on trifles. They built factories, roads, bridges ...

Forgive us for the construction of the Chernobyl Rovno, South Ukrainian, Zaporizhia, Khmelnitsky NPP.

Forgive us for the most powerful even by Soviet standards industrial and coal complex in the Donbass. For the development of the Dnieper lignite basin. Sorry for the many oil pipelines built, the largest of which are: the Druzhba oil pipeline, Dolina - Drogobych, Kuibyshev - Lisichansk - Kremenchug, Gnidintsy - Glinsko-Rozbishevskoye - Kremenchug - Kherson, Kherson - Odessa, Akhtyrka - Glinsko-Rozbishchevskoye. A separate penitential word for gas pipelines, these fetters of the Kremlin energy slavery: “Union” (Orenburg - the western border of the USSR), Urengoy - Pomary - Uzhgorod, “Brotherhood” and others.

Forgive us for the constructed Zaporizhstal, Azovstal, Krivorozhstal, Dneprospetsstal plants (the first electrometallurgical plant of high-quality steels in the USSR and one of the first in the world), the Nikopol South Pipe Plant, the Zaporizhzhya Ferroalloy Plant and others.

I blush with shame when I realize that as a result of the Moscow colonial policy, Ukraine in terms of industrial output and the value of fixed assets of the Ukrainian SSR occupied the 2 place after the RSFSR, and in the production of mercury, ilmenite, rutile and zirconium concentrates - 1 place in the country.

Listed only a drop in the sea of ​​several thousand industrial enterprises and unique high-tech industries that were created in the period from 1945 to 1991, to permanently enslave and destroy Ukraine and the proud Ukrainian spirit!

And, of course, we gave you the Crimea. This unprecedented crime before Ukraine will never be redeemed in due measure, and even the fact that it ceased to be part of the free, going to the light of European culture and civilization of the country will never correct this shameful page of our inhuman yoke!

But no prison is worth it forever! And in 1991, you, Ukrainians, got rid of the chains of our slavery, gained long-awaited freedom and independence. And the first thing you are is absolutely right! - decided to do: get rid of the "scoop", from the very spirit of the former slave life in the accursed family of Soviet peoples. Then you got rid of him for the first time. Then you finally got rid of him finally in 2004, finally, now you are once again, I am sure, not the last (!) Finally get rid of the “scoop” in yourself and the surrounding life.

Yes, the previous two times you did not succeed, you went through trial and error, but your road was right! While we, the Russians, had been collecting the slave attributes of the Soviet empire in fragments for almost a decade and a half, despite the corruption that had eaten away us and the total absence of ideas and ideals uniting us Russian barbarians, we boldly and proudly went ahead.

Over the 23 of the year, your rulers and governments sold and destroyed the damned Soviet industry, got rid of the very foundations of the cursed Moskal science, even their army is the main legacy of the vile scoop - your presidents and defense ministers sold, looted and destroyed.

Your roads dilapidated, mighty factories became obsolete, mines died down ... Today the "scoop" is almost out of you, the last and most difficult thing is to finish off education, culture, social sphere, to carry out the wildest and antisocial reforms. In addition, I am convinced that you need to return all the lands transferred to you by our criminal regime (I know that you have already started this journey, but the Crimea is only the first step from the many more coming years in the coming years) and then you will open the doors to happy capitalist future.

More precisely, they would have opened, if not for one “but”. This is our main fault, I understood it now clearly and distinctly - in the very fact of our existence. We can stop driving to you, can interrupt diplomatic relations and close the borders, but as long as Russia exists and the Russian people your rulers will always find an opportunity to blame us for any problem, crime, failure. Generally - everything.

We can and should obey you for all our crimes and guilt, but we are still not ready to disappear completely as a country and people. Foolish patriotism, you know, national pride, unity before a common enemy and a common misfortune, and other attributes of a slave scoop ... I agree, savages, what to take with us except for analyzes and a thousand-year history.

In general, probably, we will have to stay, and you will learn to live peacefully and without reason near us. Or to do what those who could not reconcile with the fact of our existence did — challenge us. And prepare yourself in advance warm caches and delicious ties.
Because in one thing your current teachers and mentors are right - we do not know how to stop halfway. Fly so fly, shoot so shoot ... So you really forgive us and somehow choose!

Ctrl Enter
Noticed oshЫbku Highlight text and press. Ctrl + Enter
We are
Don't cry for me, Ukraine!What you didn't want to know about England
Military Reviewin Yandex News
Military Reviewin Google News
250 comments
Information
Dear reader, to leave comments on the publication, you must sign in.