Crimean victory must be used for constitutional reform 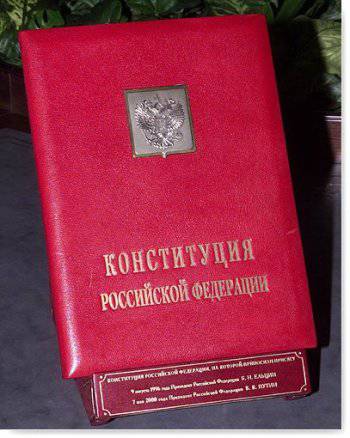 The “Ukrainian revolution” and the reunification of Russia with the Crimea can be a good reason to carry out a constitutional reform. Obviously, the main threat to the future of Russia is not an external confrontation with the West, which will only strengthen us, help mobilize, but the sad legacy of the Yeltsin period.


It is internal faults and cause the greatest concern. Suffice it to recall that it was the internal prerequisites that caused the death of the Russian Empire. The First World War became a catalyst for the general collapse, and not the main cause of the death of the Russian state. By the Second World War, Russia-USSR was prepared much better: society was mobilized, cohesively united by a single ideology, the “fifth column” was suppressed.

Unfortunately, the current Russian Federation is more like the Russian empire than the Stalinist Soviet Union. Although the modern world situation is just similar to the military-political situation that preceded both world wars. One of the weaknesses is the Constitution of the Russian Federation 1993 year. When creating this Yeltsin constitution, two main tasks were solved.

First, the new constitution has come to Russia with certain restrictions. Russia-USSR in 1991 suffered a defeat in the Cold War, which some experts call the Third World War, and the winners set their own conditions. Russian civilization was divided into three parts: the Russian Federation, Belarus and Ukraine. Such major strategic territories as the Baltic States and Transdniestria were rejected. The Russian people turned out to be the largest ethnic group, divided into parts, and a significant part of it was immediately subjected to powerful processing. Russian turned into "Ukrainians", "Russians", etc.

The draft Yeltsin Constitution of 1993 was prepared by Chubais advisers who had close contacts with the CIA and the US State Department. Such a constitution was necessary for the launch of the external governance mechanism. Russia should have forever become a “semi-colony” of the West — an outwardly “independent” state, ruled, however, a “fifth column” in the interests of the Western world.

Secondly, this constitution gave all powers to the president, who, relying on the comprador oligarchs, was supposed to suppress any popular discontent. The constitution has become "super-presidential." No wonder Yeltsin was half-jokingly called "Tsar Boris." In fact, after the suppression of the popular October uprising of 1993, a dictatorship was created in the camp, which protected the interests of a narrow class of oligarch-compradors who plundered the country and turned it into a "pipe" - a raw materials appendage of the West, and then of the East. The December Constitution enshrined this order. Therefore, in the West for the time being, they turned a blind eye to violations of rights and freedoms, ”since all this was done in the interests of the Western world. In the US, the Russian constitution 1993 was adopted "with a bang." And only at the beginning of 2000-ies the US State Department began to criticize the constitutional structure of Russia. Under Yeltsin, when the Russian Federation was under the "full cap", no one thought to criticize the basic law. In Yeltsin’s hands, the constitution was “wonderful”; she suited everyone. They began to criticize it when Russia began to restore its sovereignty.

It is not surprising that by the 20 anniversary of the Constitution in December 2013, the liberal wing of the Russian political “elite” gave only positive evaluations to this document. Thus, Yeltsin Center held an international conference dedicated to the 20 anniversary of the Russian Constitution (Behind closed doors). The leader was G. E. Burbulis (in 1990 — 1992, the closest ally of Boris Yeltsin). Among the prominent guests are S. S. Shushkevich (one of the leading participants in the Belovezhsky Agreement), G. A. Yavlinsky, L. Ya. Gozman, I. M. Khakamada, K. N. Borovoy (chairman of the Western Choice Party) Yu. S. Pivovarov et al. For the patriotic wing of the Russian public, the flawedness of the 1993 Constitution is obvious. The Constitution Day of the Russian Federation did not take root in the people either: ordinary people are completely indifferent to this “holiday”, the majority do not know what the date is. But for the liberals, Yeltsin’s constitution is “delightful,” and in no case should it be changed.

The attitude of Russian liberals to the Yeltsin constitution is a very clear indication that it needs to be changed. Constitutional reform or even the drafting of a new constitution is a must. In particular, it is necessary to return to the fundamental guarantees of the welfare state. The cannibalistic capitalist system, which at the beginning of the 1990s began to be created in Russia, needs to be changed, returning to the socialist standards of the Soviet Union. No wonder many of the most profound Russians, and even foreign thinkers, called the USSR an advanced power of humanity, which showed a possible bright future for the whole world.

There are several other fundamental elements that should appear in the Russian constitution. Thus, State Duma deputy Yevgeny Fyodorov, who calls the current constitution “the colonial rule of administration,” proposes to introduce several important amendments to the main law. From the article 13, according to Fedorov, it is necessary to abolish the paragraph 2: "No ideology can be established as a state or mandatory." In this the deputy is right. A state without ideology easily becomes a victim of alien ideologies and value attitudes. In the 1990-s and the beginning of the 2000-s, the Russian Federation became a country where liberal (up to liberal-fascism) ideology gained full dominance. Strong positions were also given the values ​​of the “Islamic project”. In addition, the main part of the inhabitants "drowned" in a consumer society, where the values ​​of the "golden calf" dominate.

You must understand that the holy place is never empty. If society does not have its own idea, the western and eastern “partners” will implement their own values. Therefore, Russia should have a national ideology, the foundation of which should be patriotism, the primacy of national interests over the values ​​of narrow populations and individuals. Russian civilization initially flocked on the idea of ​​good and justice, and should remain so in the future. Otherwise, it will not be Russia, but a territory colonized by alien civilizations and cultures.

Fedorov also believes that paragraph 15 should be removed from article 4: “The generally recognized principles and norms of international law and international treaties of the Russian Federation are an integral part of its legal system. If an international treaty of the Russian Federation establishes other rules than those provided by law, then the rules of the international treaty shall apply. ” This item may harm the national security of Russia, it limits its sovereignty. Russia in its domestic and foreign policy should follow only national interests. Already, this item allows us to push the norms of juvenile justice to Russia, which has destroyed the traditional family in the Western world. What, if the turn of a dozen or so years “legal principle and norm of international law” becomes the legal drug trafficking and slave trade ?! We will put the “generally accepted principles” above the traditional values ​​of Russian civilization? We are not obliged to comply with laws and regulations that are developed by foreign states and organizations.

The abolition of these points will allow Russia to become a fully sovereign state-civilization. It will allow the formation of a patriotic, people-oriented, rather than Western values, elite. It will be possible to “clear out” the information field of the country from “internal enemies”. It should educate children patriots of Russia. It is necessary to adjust the work of the media in the right direction, etc.

This is a strategic mistake. Opponents of this idea speak about the growth of interethnic tension, but this is nonsense or a conscious lie. Superethnos Rusov was initially state-forming. Russians created a unique civilization. Other ethnic groups, Finno-Ugric, Turkic, etc., were equally attracted to the process of building the “empire”. Moreover, the Russians, unlike the great (imperial) peoples of the West, did not show racism, xenophobia and chauvinism. The rule of the Russian language and culture allowed to fasten the vast expanses of Northern Eurasia. It is the destruction of "Russianness", and not the restoration of the value of the Russian people that leads Russia to destruction.

The recognition of the state-forming status of the Russian people will allow to correct the imbalance in favor of local ethnocracies and cosmopolitanism in the governing structures, which was created in the years of the USSR and became one of the prerequisites for the death of the Union. It will allow consciously pursue a policy of Russification of Russia, which in recent decades has lost a significant part of its "Russianness". It is crazy to think that Russia will fall apart from the fact that in its development it will rely on the Russians and will return to its traditions and the basics of its existence.

The current foreign policy situation gives Russia a unique chance to correct the mistakes of the previous period. stories. Constitutional reform will eliminate one of the most difficult and dangerous legacies of the Yeltsin period. A counteroffensive on foreign policy fronts should take place with a simultaneous internal transformation of the state. Only in this way can Russia win and lead the process of mankind’s exit from the crisis.

Ctrl Enter
Noticed oshЫbku Highlight text and press. Ctrl + Enter
We are
Situational analysis of the death of the MH17 flight (Malaysian Boeing 777), made on the basis of engineering analysis from 15.08.2014Bashar al-Assad: In Syria, not the “revolution” that the enemies are talking about, but the revolution of the army and the people against terrorists
Military Reviewin Yandex News
Military Reviewin Google News
91 comment
Information
Dear reader, to leave comments on the publication, you must sign in.