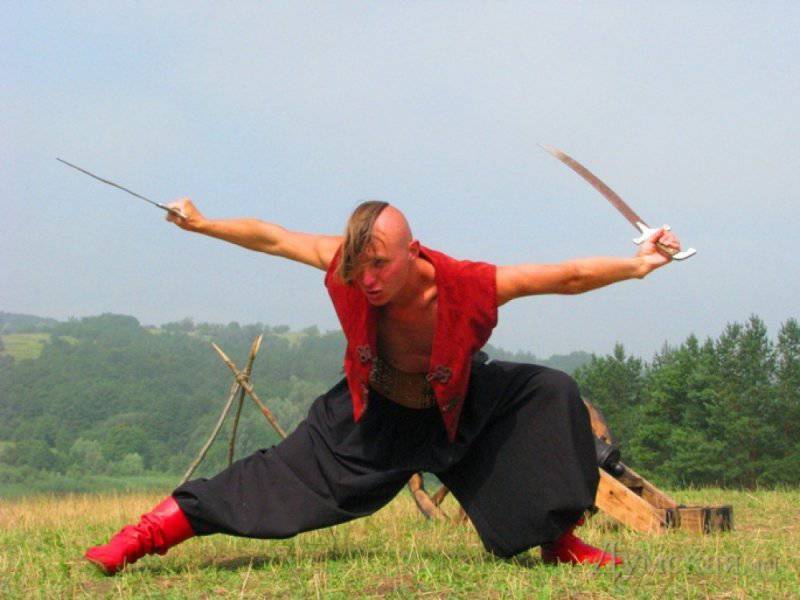 Whenever it comes to martial art, which uses certain elements of dance in its arsenal, or methods of using martial techniques in dance, many immediately capoeira comes to mind. But not everyone knows that this example is not the only one. For example, there is still such a martial art, which is called martial gopak. Despite the fact that he is very often compared to capoeira, in reality, in his philosophy, he is much closer to traditional kung fu.

Martial art is called a martial gopak, which combines throwing and percussion techniques with the plasticity of Ukrainian folk dance Hopak. For this art is characterized by striking and kicking, and hands, as well as the use of grips and blocks. As a modern national martial art and military philosophy, the gopak has been developing for over two decades. At present, up to seven thousand people are engaged in the schools of military hopak all over Ukraine.

It should be noted that the system of education of soldiers on our land has always existed. Its founders were the indigenous population - sedentary farmers who were forced to defend themselves and their territories, and nomads who were constantly moving around the country.

Information about the military national tradition has been preserved only since the existence of Kievan Rus. Its legislators were the Magi, who were engaged in the upbringing of princes, who, in turn, obeyed the warriors. The preparation of warriors began at the age of three years, and of the princes even before birth (the magicians whispered certain prayers over their mothers). When the boy was three years old, he was taken from his mother, and began a systematic training. When the child was thirteen years old, he underwent a rite of initiation into warriors (the so-called rite of imprisonment on a horse). Only after that the new warrior had the right to go to battle and seek fame. And if a warrior died in battle, it was generally considered the greatest honor.

After the baptism of Russia, with the advent of Christianity, everything changed dramatically. Military honor began to take a completely different way. According to the new religion, the enemy had to be met with humility. That is why, some researchers say, when the Mongols came to the Russian lands, the warriors could not give them a fitting rebuff and protect their native land.

New legislators destroyed representatives of the old system, but some managed to survive. Most of the wise men went under the guise of the elders to the people, thus transferring their knowledge to people. Therefore, even despite the fact that the system of education of soldiers no longer had a single center, its tradition has been preserved. The elders of the Magi lived in almost every village. And most parents gave them their sons for education, offering honey, grain and cattle as payment.

In addition, a reliable stronghold of the national military education system was located on the Sich and was supported by Cossack character. When the Sich was crushed, they also went to the people, having encoded their knowledge in a dance - the gopak, the lasso, the blizzard, the Cossack girl.

If we talk about the modern attitude to the martial gopak, now there are several basic views on this martial art.

According to the first, the combat gopak is the original Ukrainian combat system, which appeared in the Zaporizhzhya Sich, where there were special schools in which this type of martial art was taught along with learning to play musical instruments and literacy.

The second look at the military gopak has pronounced nationalistic shades and says that the roots of the military hopak go either to the Aryans, or to the ancient Ukram. There is a lot of patriotism in this and there is practically no sport.

In the modern world, representatives of the school of military hopak are very often accused of the fact that the military education system, which they support, has no solid basis.

There is some truth in this, because right up to the 1985 year of the military hopak as a Ukrainian type of struggle, his system clearly did not exist. And only thanks to Lvov Vladimir Pilate, she appeared.

There is information that the man lived in the East for many years, and returned to Ukraine, already being a karate master. Pilate wanted to open his school of martial arts, but he was recommended to return home and do it here. And so the first experimental school appeared in 1985 in Lviv.

Despite the fact that most people consider the war gopak as Old Russian martial art, in reality it is a modern martial art that includes some elements of Ukrainian folklore. The founder of the school, V.Pilat, calls the war gopak the author's style, which combines the various elements of oriental martial arts, folklore and dance elements. Mandatory part of all fights is musical accompaniment.

The fighting gopak has seven levels of skill, of which three are student's (Sokol, Zhovtyak, Master), three workshops (Character, Kozak, Magus) and one intermediate (Jura). Each step has its own coat of arms.

Each combat duel is conducted under a certain musical accompaniment, which, strictly speaking, sets the overall emotional tone. Those who have masterful degrees have the right to use in a dance duel. weapon (from sickle to two-handed sword). And if we take into account that such fights, as a rule, are held in Ukrainian national Cossack costumes, then it is obvious that the spectacle turns out to be simply thrilling.

There are several types of combat hopak, you can go a sparring or act in single exercises. Solo performances are more like dancing to music, in which the main focus is on the demonstration of combat techniques. Sparring is divided into several types: light, which only implies strikes, and more risky, which implies the conduct of the fight in full force.

Currently, the largest centers of military hopak are both in Kiev and in Chernivtsi, Ternopil and Lviv. A well-represented combat gopak in the Dnipropetrovsk region. In the Ukrainian capital, the development of the combat hopak began in the middle of the 90s of the last century. In 1997, the School of Combat Gopak was opened on the basis of the T. Shevchenko Kyiv National University, which was actively supported by students. In the winter of 2001, the first All-Ukrainian educational and educational seminar on Combat Gopak was held in Kiev.

Gradually, the interest of the younger generation in the combat gopak began to grow. And already in 2002, a branch was opened for the youngest students. In 2004, the combat gopak was introduced into the curriculum of the Ukraine University in Kiev. In addition, in the same year, the Gopak Art Show Art Center was organized, which operates on the basis of the Kiev Federation of Fighting Gopak, and which organizes demonstration performances and show programs not only in Ukraine, but also abroad.

Ctrl Enter
Noticed oshЫbku Highlight text and press. Ctrl + Enter
We are
Tips just in case, and the cases are different ...Disguise. The art of being invisible
Military Reviewin Yandex News
Military Reviewin Google News
124 comments
Information
Dear reader, to leave comments on the publication, you must sign in.