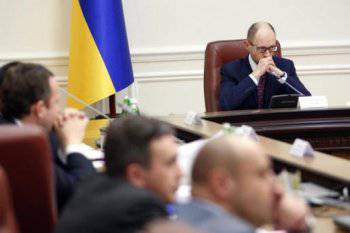 While Russia is tightening its control in the Crimea, the European Union and the United States are ready to provide billions in assistance to the new leadership of Ukraine.


The provisional government in Kiev, headed by Prime Minister Arseniy Yatsenyuk and incumbent President Oleksandr Turchynov, promised, according to Yatsenyuk, to carry out "real reforms to stabilize the Ukrainian economy" and strengthen ties with the country's European neighbors.

Will they make the promise? Here are four unpleasant truths about Ukraine and the people who now govern them.

1. Many of the new leaders participated in the formation of policies that turned Ukraine into an economic cripple.

Like their post-Soviet predecessors, they could not curb the rampant corruption and overcome economic inefficiency, instead they supported the hryvnia and gave an increasing social expenditure to a demanding crowd, resulting in a massive budget deficit and trade deficit. Ukraine, a country with a population of 45-million, rich agricultural land and a large production base, is currently the poorest country in Eastern Europe, except for tiny Moldova.

The EU, with 1991, has provided Ukraine with 13,8 billion € ($ 19,1 billion) in grants and loans. Assistance from the International Monetary Fund and individual governments, including the United States, is in excess of 30 billions of dollars. In addition, Ukraine received large-scale assistance from Russia in the form of a reduced price for natural gas through subsidies totaling from $ 200 billion to $ 300 billion from 1991 of the year, ”said Emily Holland, a specialist in energy policy in the region, international relations (Berlin). Add up all this, and it turns out that Ukraine received far more assistance than any country in the former Soviet Union, she says. And where did she go? “She ended up in the pockets of an incredibly corrupt political elite and oligarchs,” says Holland.

The EU and the IMF indicate that any new assistance will be conditional on strict adherence to the reform program. The previous IMF assistance program "went off the rails" after Ukraine was unable to carry out reforms. As for the oligarchs, the new regime has appointed some of them to key regional government posts in eastern Ukraine.

3. The new government is a fragile coalition that includes some pretty scary elements.

When Vladimir Putin says that there are extreme right-wing extremists working for Ukraine, he is not so far from the truth. It is true that Batkivshchyna is the party of Tymoshenko, the main opposition of the former President Viktor Yanukovych, is the largest bloc in the new government. But politicians from Freedom, an ultranationalist party with ugly neo-fascist tendencies, also gained important jobs, including the post of deputy prime minister and chief of national security.

Some other, smaller batches are even more extreme. Even if they soften their rhetoric, Freedom and their allies have a strong populist orientation and are likely to come out of the coalition if it makes the economic sacrifices demanded by Western donors, said analyst Lilit Gevorgian from IHS in London. Social tensions due to painful reforms can cause social unrest, which may even lead to the fact that some parts of eastern Ukraine will seek union with Russia, Gevorkian said. "Russians can just sit back and watch how everything is unraveled," she says.

Even now, when it seeks to draw closer to Europe, Ukraine cannot afford to turn its back on its huge eastern neighbor. For starters, it receives more than half of its natural gas from Russia. The EU cannot help if Moscow turns off the tap - although this is unlikely to be done as Russia supplies gas to Western Europe through Ukrainian pipelines. The EU also cannot suddenly absorb the $ 15 billion worth of pig iron, steel, grain and other products that Ukraine annually sells to Russia, which is its largest trading partner. And despite all the anti-Moscow rhetoric that was heard during the recent protests, the two countries have deep historical and cultural ties. About 8,3 million Ukrainians, almost a fifth of the population, call themselves ethnic Russians in the country's latest census, while about 1,9 million Russian citizens say they are ethnic Ukrainians.

In the West, as well as in Russia, the black-and-white depiction of the conflict does not allow deciding who is right, he says. “Putin is now waging a PR war against the entire West, and Ukrainians are filling their media with the same infection of propaganda and disinformation as the Kremlin-controlled Russian TV.”