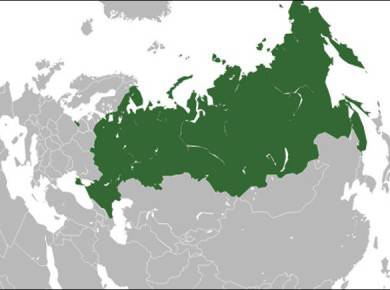 According to estimates of services involved in monitoring Internet requests, one of the most popular requests on the Internet in different countries of the world was the “map of Russia” request. This is due to the fact that users want to see whether the fact of the occurrence of the Crimea and Sevastopol into the Russian Federation on modern electronic maps is displayed.
After 18 March 2014 World Map has undergone significant changes. The Republic of Crimea and the city of Sevastopol, which officially declared their independence from Ukraine, on the basis of a popular referendum, became two new subjects of the Russian Federation.
Immediately after the entry of the Crimea and Sevastopol into Russia, Ukraine became hysterical. Representatives of the country's political forces declared that Russia had "annexed" the Crimea. The word "annexation" can be heard from the mouth of almost any politician who positions himself as a supporter of euromaidan. At the same time, none of these persons mentions that more than 96% of voters who came to the polls voted for joining the Crimea and Sevastopol to Russia (and came to the polls over 83% of the Crimeans and Sevastopol residents).
Yulia Tymoshenko spoke out in the habitual way of accusing everyone and everything in the troubles of Ukraine, who, due to a great misunderstanding, which has nothing to do with legal norms, has been released. Today, Ms. Tymoshenko also accuses Russia of “annexing” the Crimea, and states that the Crimea “will soon” again be part of Ukraine, and that its “illegal” Russian jurisdiction is a temporary phenomenon. Tymoshenko correctly forgets that there is nothing more permanent than temporary.
Having accused Russia of “annexation” and further encroachment on the integrity of Ukraine, Tymoshenko called the Verkhovna Rada of Ukraine a gadyushnik. At the same time, the former prime minister and one of the presidential candidates declares that Rada needs to be immediately dismissed, and the deputies re-elected. Dissolve, disperse, re-elect - in all likelihood, Yulia Vladimirovna’s favorite verbs, which in no way wish to accept the status of a politician, whose level of support in Ukraine is about 18%. Deputies of the Verkhovna Rada are already urging Tymoshenko to answer for the “gaddyushnik”, and it’s quite possible that they will have to answer in full, given the nature of today's ukropolitiki.
Ctrl Enter
Noticed oshЫbku Highlight text and press. Ctrl + Enter
We are
Military Reviewin Yandex News
Military Reviewin Google News
3 comments
Information
Dear reader, to leave comments on the publication, you must sign in.