March 22 2014
365
In the relevant section of the White House website there is a petition demanding the reunification of American Alaska with Russia. It is noteworthy that the US authorities have hidden this petition. Only a person who has a direct link can respond to it, but on the main page it was visible only for a few minutes, after which it disappeared somewhere. 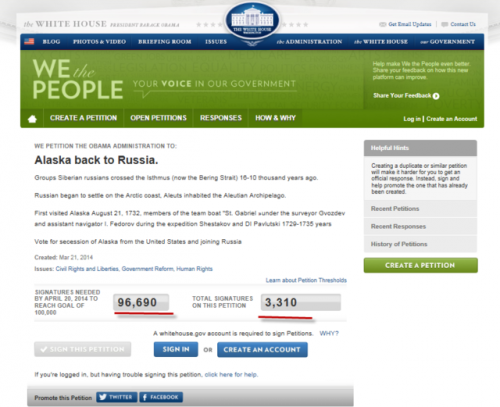 At the moment, with the help of a search on the White House website, this appeal cannot be found.

According to the rules of the site, the US administration is not legally obliged to respond to the petition, but the rules state that the White House plans to respond to all appeals that have overcome the established milestone in 100 000 in 30 days. Appeals are made by Internet users. From the same voters are required to register on the site.

Under the conditions, the petition must dial the minimum number - 150 votes in order to become visible to all visitors to the site, but at the moment the appeal is not available for support even through the site's search service.

Editor’s Note: The indifferent activists in Russia accurately identified the weak point of American democracy. As far as can be judged, a petition for the reunification of Alaska with Russia was filed in accordance with the American letter of the law, but the US is doing everything possible to keep from the scandal and keep it secret from the general public - so that it can be removed as "not won votes."

American politicians are well aware that the French "Declaration of the Rights of Man and the Citizen" and the American "Bill of Rights" became the basis for the creation of the "Universal Declaration of Human Rights". But now the US is remembering its glorious stories only when it is necessary to assert its authority. So, when it came to self-determination of the Crimea, for some reason it did not occur to them that for George Washington there was nothing more valuable than the free will of the citizens. We are confident that they would prefer to forget about their "Bill" and on the issue of Alaska.

Alas, experts, journalists and politicians state that such an attitude towards democracy in the United States does not apply only to their foreign policy. Citizens have nothing better. Recall that the Occupy Wall Street movement, which began in 2011, was "against the dominance of financiers who violate the rights and freedoms of ordinary Americans." Leaders of the movement claim that the US has degenerated from democracy into an oligarchy, while a free country has remained only on the pages of books and television screens. What is the end of the multi-day shares buy Okkupay? That's right, dispersal with the use of rubber bullets, tear gas, batons and stun grenades.

In short, the petition about Alaska that has appeared can be viewed not only as a joke or banter over the United States, but also as an attempt to sober up their leadership, recalling the foundations of their own state. “By subscribing to the petition, you will not only support the reunification of Russia and the Crimea, but also help US citizens in the struggle to restore their rights and freedoms,” they write maliciously on social networks.