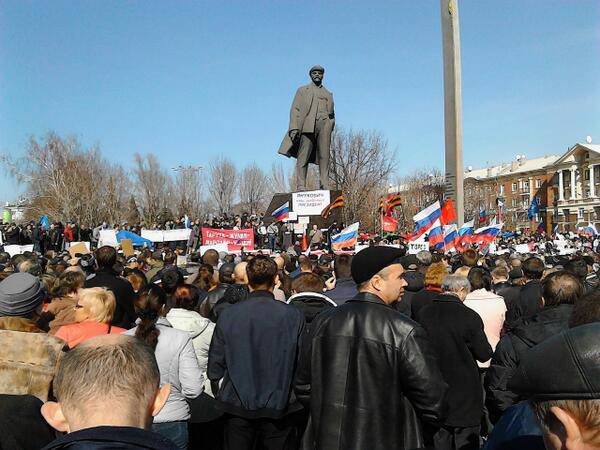 On the stage are posters with inscriptions: "Yanukovych is our legitimate president", "Yanukovych, protect your people." Participants of the rally chant slogans. Protesters believe that Viktor Yanukovych should return to Ukraine, lead the country and remove the current Cabinet of Ministers and the Verkhovna Rada from power.

In addition, leaflets of the “Russian Bloc” are distributed on Lenin Square with calls to come to the rally on Sunday at 12 in the afternoon.

It should be noted that this is not the first manifestation of pro-Russian citizens in Donetsk. On the eve and the day of the referendum in Sevastopol and the Crimea, the residents of Donetsk also went to the rally. They expressed support for the will of the Crimean people, appealed to the Verkhovna Rada demanding “to remove the illegitimate cabinet and cancel the decisions”, to create a new coalition government, “coordinating its composition with the people”. Among other requirements was to give the Russian language the status of the state, to adopt a law on local referendums and to investigate the death of people on the Maidan in Kiev.

The rally today also takes place near the monument to Lenin on Freedom Square in Kharkov, where those who are present demand a referendum on broad autonomy for the regions of south-east Ukraine. Demonstrators with banners in the form of St. George ribbons, as well as the national flags of Ukraine with St. George ribbons chant "Referendum!" And "Russia!". Speakers from the scene criticize the actions of the "interim government" in Kiev.