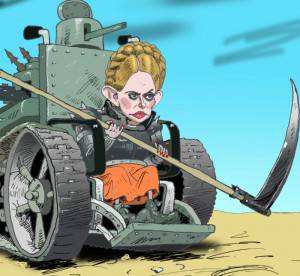 Yulia Tymoshenko initiated a meeting with the participation of well-known experts in the defense and military spheres and proposed the creation of a permanent headquarters that will turn out solutions to respond to the threats that Ukraine faced because of the military aggression from Russia. It is reported by the press service of "Batkivschiny".

Tymoshenko noted that the current situation "makes us look for extraordinary solutions to respond to Russia's military aggression at a new level."

She also indicated that the annexation of the Crimea had been prepared by Russia for a long time, the plans were more ambitious, and does not exclude that Putin will continue their implementation.

“As for peace, we will insist that military assistance come in any context. We will insist that they increase sanctions. But all realists: we are left alone in a very difficult situation,” Tymoshenko emphasized and invited the meeting participants to unite to develop an Action Plan for responding to Russian military aggression, annexing Crimea and preventing further escalation.

According to the results of the meeting, a package of several dozen proposals was developed, which will be immediately sent to the leadership of Ukraine. Earlier, former Defense Minister Anatoly Gritsenko said that he was ready to assume the powers of the commander-in-chief of the Armed Forces of Ukraine.