The giant is over the fight. But it seems that China is becoming the rear of Russia 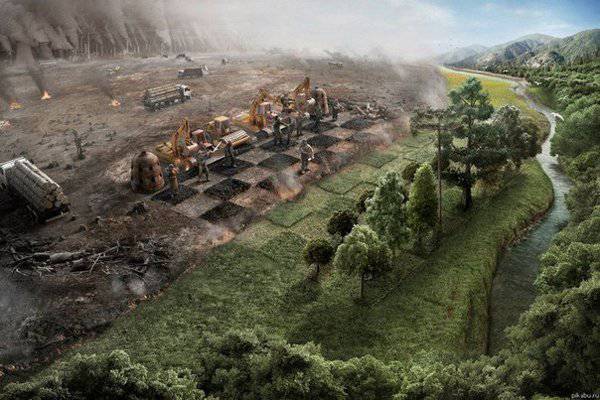 The events of the last month in Ukraine have changed not only the power, the distribution of political forces, but also the geographical map of this country itself. But the Ukrainian explosion is truly tectonic in nature, and the waves from it begin to diverge around the world, breaking the existing system of international relations.

The West, of course, is most worried about Russia's strengthening and the prospect of the revival of the USSR looming behind it. Most precisely such fears are formulated by a Cold War hawk and a singer of American hegemony, like Zbigniew Brzezinski. In an interview with the television company Euronews, he put it very clearly, speaking of the position of Vladimir Putin he understands:
- He wants to revive the Soviet Union. And Ukraine is the price of that. If he can get Ukraine, he will be able to realize his dream.

And how will the West respond? Anticipating the sanctions that Obama is now introducing, Brzezinski outlined the black circle two weeks before their promulgation: economic agreements could be suspended, accounts abroad frozen. There are many similar ways to let the Russians understand that such actions in the geographical center of Europe turn out to be real material losses for them. And, it must be said, the economic problems in the Ukrainian crisis, initiated by the West, are of almost primary importance for the West itself.

Dr. Jim Willie writes about this in detail in his column “Ukraine and the Desperate US Efforts to Rescue the Dollar” on the USAWatchdog website. Com ”we are, writes this American writer and marketing research analyst, in a desperate situation. The US government cannot allow Ukraine to become the central transit point through which pipelines of the rapidly developing Eurasian trade zone stretch. They need to stop the development of this zone at any cost, because the United States and England will then be left out.

If you dig deeper and try to figure out what is really happening, then we can consider the recent events as the third offensive against the Russian Gazprom.

The first attack on this largest company in Russia was veiled under the Cyprus events. The leading subsidiary of Gazprombank was located in Cyprus. Moreover, Russia used Cyprus as a clearing platform for the purchase of gold bars.

The second attack on Gazprom was Syria. The Iranian pipeline was supposed to reach for the Syrian ports. And now Ukraine. That's what the United States actually does. This is the third attack on Gazprom. America and Europe are confident that if pipeline valves are under their control, they will be able to control the flows leading to Romania, Poland and Hungary.

The real problem, the article says, for the West will be the need to pay for oil and gas not with a dollar, but with another currency.
It may very soon happen that Russia will demand to pay for its oil and natural gas in rubles or gold bars. If she achieves a switch to pay in rubles, it will immediately expose all the ridiculous and pest-harmful essence of the actions of Wall Street and London, who are trying to punish Russia. America, with its huge debts, is not in a position to manage the situation.

Concerning the real value of the American dollar, Dr. Willie said:
- The response to pressure from the US will be steps to abandon the petrodollar, which will force banking systems around the world to quickly sell as unnecessary US Treasury bonds.

According to Dr. Willie, over the next three years, the US dollar will lose 80% of its value.

“Future Prospects for Russia,” is the title of the book by Edgar Cayce (1877-1945), who was called the “sleeping prophet” who predicted the beginning and end of World War II, the decline of communism and the second revival of Russia with a strong religious movement that will appear in the country. Publication of excerpts from his books appeared on the website “PolarLight.org”. Here is a quote from Casey:
- The hope of the world, its revival will come from Russia. They will have no connection with what is today called communism or Bolshevism. It will be freedom, freedom! Everyone will live for their fellow!

It seems that the prophecies are beginning to come true, though not at all in a benign atmosphere. The title of the article about the revival of Russia “Evil Vlad passes the West to the West” is characteristic of the website “The Unz Review: An Alternative Media Selection” (unz.com). Since its separation from Russia in 1991, Ukraine has been a failed state, eroded by corruption. It has long been clear that its division into pro-Western and pro-Russian units with the return of Crimea to Russia is a prudent decision, the publication says. But, most importantly, it is a rare example of unbiased Western journalism, which is what the site, which deals not with propaganda, but with true assessments of what is happening, specializes in it. Therefore, the conclusion is the following:
- Putin made a rapid knightly move, occupying an empty chessboard cage - Crimea. Thus, he regained full control over one of the strategic ports of Russia, which along with Sevastopol include Murmansk, St. Petersburg and Vladivostok.

Against the background of many monotonous publications on Ukrainian topics, the article “Ukraine in exchange for Iran?” Stands out on the site “essential-intelligence-network.blogspot.com”. It analyzes in detail the changes taking place against the background of the Ukrainian events in Iran, the Middle East and China. The latter, in particular, says that it is not surprising that the actions of Uygur Muslim separatists under the control of the CIA, who committed a massacre as a result of a massacre at the railway station, were simultaneously exacerbated. Perhaps the tragedy with the Malaysian aircraft has the same tragic connection.

Undoubtedly, there is an attempt to threaten China, so that he refuses to support Russia or Iran, while negotiations are underway on a nuclear program. Perhaps there is a preparation of the soil for the future separation of the Uigurs from China.

As if echoing this publication, the “Indian Punchline” publication placed the article “The Shadow of Ukraine in the Steppes of Central Asia”, where such a little-known fact is cited: an attack on the border guards of Turkmenistan by armed elements of unclear origin from Afghanistan recently took place. Of course, the blame was laid on the Taliban, although Ashgabat itself traditionally did not share its thoughts with anyone about the incident that resulted in the death of three Turkmen border guards. All of this suggests that they are apparently trying to convince Ashgabat that this requires help from the United States and NATO to ensure its own security.
And in a completely “random” manner, the March 1 incident on the Turkmen-Afghan border occurred amid reports that American intelligence was interested in receiving new facilities in Central Asia to support tracking operations during UAV flights.

Indicative also regarding hidden concerns in the region was the decision of Dushanbe to block the broadcasting of the US-funded Radio Liberty / Free Europe.

Events in Ukraine emphasize the ease with which hidden popular discontent can be used by foreign powers to push for regime change.
So far, Central Asia remains outwardly calm, but almost all the elements that have turned Ukraine into a volcano exist here.

Therefore, the strengthening of the Russian military presence here has a huge geopolitical meaning. As events unfold in Ukraine, a clash of interests between the United States, NATO and Moscow in the region can be expected. Moscow cannot but realize that the author of the famous book The Great Chessboard, Zbigniew Brzezinski, today openly speaks of the mobilization of NATO and the approaching war. It would be too risky for the Kremlin to assume that the United States and NATO are still harmless partners. Such is the position of this famous Indian publication.

RIA columnist writes in detail about the intricacies of China’s position in the Ukrainian crisis News Dmitry Kosyrev, who claims that Beijing is closely following the development of the crisis in Ukraine, trying on possible scenarios for the development of the situation. It should be understood that China is waging an ideological struggle against the "three evils" on the world stage. These are terrorism, extremism and separatism, that is, the separation of territories with the help of “revolutionary” actions of a part of the population, supported from abroad.
The Chinese have no illusions about the essence of the events in Ukraine. This is a “fiasco of the West”, a fiasco because the project of creating a pro-Western regime failed and created chaos, which the West has neither the ability nor the desire to rake. In addition, the Westerners underestimated Russia..
Officially, Beijing is still in a neutral position, calling on all parties for restraint. And closely watching the key point of what is happening - in money.

The most perspicacious observers in recent years, exploring the alignment of forces in the Russia-West-China triangle, not without reason, assumed that in the developing Asian offensive vector of the United States in the Pacific, China, opposing America, could look for its reliable rear in Russia. Today, events have dramatically changed direction. Russia went into direct confrontation with the West. And the rear (the question of how reliable it remains to be resolved) is now in fact becoming our mighty neighbor, China.