Why is the Crimea worse than the Saar? And again the hypocrisy of the West 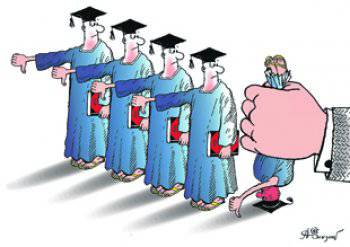 Probably, at the moment, nothing provokes such discussions as a referendum in the Crimea. Western politicians vied in shouting that the referendum was illegal and demanded that Russia stop it, although for an unbiased observer, the referendum has always been and is an expression of the will of the people, in this case the population of Crimea. And the media bring an avalanche of publications to readers, including those claiming to be deeply analytical, trying to justify this illegality. And each edition gives the reasons. Although it would seem, what is obvious does not need to be proved. And all because the more or less thinking reader comes to mind too many arguments that go against the position occupied by the West.

Let's see how "illegal" a referendum in the Crimea. First of all, turn to international law. Let's start with the UN Charter, in which the right of nations to self-determination is enshrined in black and white. In addition, in accordance with the principles of the EU (where Ukraine seeks so much) about subsidiarity, "each region, region, province, if it is, moreover, endowed with autonomy rights under the constitution, has the right and should decide its own questions about state status and affiliation" (Treaty of Lisbon).

Is the referendum still illegal for you? One of the main arguments of the West is that in art. 73 of the Ukrainian constitution states that the issue of changing the territory of Ukraine is decided exclusively by an all-Ukrainian referendum, which means that a referendum in Crimea contradicts the Ukrainian constitution. This is generally a masterpiece of double standards policy. Does Ukraine still have a constitution? When they illegally made a decision to impeach the president, the resignation of several members of the constitutional court, something was not remembered about the constitution. So why should its individual positions suddenly regain strength?

An argument close to the previous one is the lack of central government consent to a referendum on independence. Ukraine clearly should not raise this topic. A referendum on the independence of Ukraine itself in December 1991 was held without the consent of the Soviet leadership. Moreover, in March 1991, 78% of the population of the USSR (including 70% of the population of the Ukrainian SSR) already spoke in favor of preserving a single Soviet state. Under these conditions, the Ukrainian leadership justified its refusal to cooperate with the Allied Center by the fact that in August 1991 in Moscow there was an attempt at a coup d'etat. The Crimea authorities have a similar reason now: there was an illegal seizure of power in Ukraine, and on this basis Crimea does not request Kiev’s consent to hold a referendum.

In practice, there are a lot of cases of lack of consent of the central government - for example, a referendum on the independence of Catalonia. The autonomy parliament appointed him in November 2014, despite the fact that Spanish Prime Minister Mariano Rajoy strongly opposed it. Or a referendum in the Italian region of Veneto, which began simultaneously with the Crimean region, which is scheduled for a five-day period. Serbia also protested against the referendum in Montenegro, however, its results (55,5 percent for independence, 44,5 percent against) allowed the country to declare independence. The EU congratulated Montenegro and declared in the person of the Secretary General that "the turnout in 86 percent indicates its legitimacy."

Does anyone else have doubts after this that Western politicians are too selective about the topic of referendums? In this regard, it is also worth remembering the Kosovo case.

The NATO bloc sent troops into Kosovo as a humanitarian mission (and without a UN mandate), and this did not allow the Serbs to interfere with the holding of a referendum. Today, the West blames Russia for the Russian military in the Crimea, who will not prevent the holding of a republican plebiscite. Then, in the 2008 year, история Kosovo was called a "special case." Turned out, nothing to say! The secession of Kosovo immediately became legitimate in the eyes of all.

In confirmation of the fact that the referendum in the Crimea is illegitimate, the Western media cite completely absurd arguments, shamelessly distorting the facts and brazenly misinforming their audience. In November, 2014 will be held a referendum in Scotland on secession from the UK. But this, apparently, is no reason to stop the baseless attacks on the Crimea.

The Washington Post, in its article on the anti-scientific claim to analyze the legality of the Crimean referendum, compares the referendum in the Crimea with the Scottish: "In the Scottish referendum two answers are offered: yes and no, whereas the referendum on independence of the Crimea will only have answers:" Yes, join the Russia immediately "and" Yes, declare independence and then join Russia. "Where is such a vigorous right of Western citizens to reliable and objective information? Will anyone else after such a language turn to call a" zombie "population Russia?

Another popular argument of the Western media is that the Scotland referendum was sanctioned by the government because of its belief that the majority of residents would vote against separation from the UK. This is not at all in any gate climbs. How do such media generally turn their tongues after that to call events in Crimea a farce?

Finally, the last argument of many politicians and the media is that there are no examples in world post-war practice of joining parts of one country to another. Crimea in this regard is compared with the Sudetenland, and Putin - with Hitler. Very, very unfounded argument. We must learn the history better, gentlemen politicians and journalists. Such a precedent was - this is the history of the Saar region, located between France and Germany. After World War II, the Saar became a French protectorate. The United States and Great Britain sought to incorporate the Saar after Alsace and Lorraine into France, while France itself favored turning the Saar into an independent border state like Luxembourg. This last proposal was submitted to a referendum and rejected by 65 by the Saartii percent who sought to reunite with the FRG.

After a bitter public debate and a new referendum on January 1, 1957, the Saar became part of the Federal Republic of Germany, becoming its tenth federal state. Taking this opportunity, we send greetings to Angela Merkel, who said that Russia would pay for her position regarding the referendum, that "tough measures" would be taken against her and that the annexation of Crimea to Russia would be a disaster. How hypocritical this statement sounds!

Hiding behind such arguments sucked from the finger, Western countries refuse to recognize the independence of the Crimean Republic and do not approve of its legitimate and reasonable desire to join Russia. Is it any wonder now that Russia wishes to resolve such issues without the consent of the West? He is a very unreliable and unpredictable partner! If it goes on like this, the next time Russia will deal with Veneto, Scotland and Catalonia in solving international problems. They at least know exactly what they want.

Ctrl Enter
Noticed oshЫbku Highlight text and press. Ctrl + Enter
We are
Situational analysis of the death of the MH17 flight (Malaysian Boeing 777), made on the basis of engineering analysis from 15.08.2014Results of the week. “And the Crimea of ​​the Fatherland is sweet and pleasant for us!”
Military Reviewin Yandex News
Military Reviewin Google News
30 comments
Information
Dear reader, to leave comments on the publication, you must sign in.