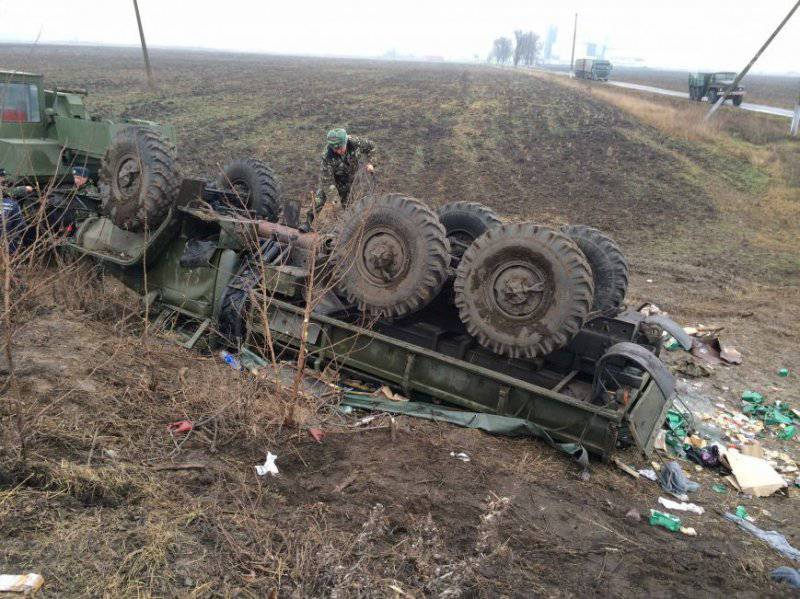 Even a non-specialist can be seen in what a terrible state the army of Ukraine has become in two decades of "independence." After the collapse of the USSR, the armies of all the former republics rapidly degraded, and by the middle of the 90-s were a pitiful sight. And if in Russia, following the wars in Chechnya, they drew conclusions and gradually began to restore the armed forces, in Ukraine the army finally went to the bottom. The equipment was not repaired and was not updated, the best part of it was sold abroad, and trash remained at the disposal of the Ukrainian military. The soldiers and officers of the Ukrainian army have forgotten what exercises are, the use of equipment and weapons. All these years, the army was not needed by anyone. The troops quietly decomposed in military units built during the Soviet era. The country's leadership has abandoned the army to its fate. For decades politicians staged clowning in the Verkhovna Rada, led orange round dances on the Maidan, divided posts and money, and no one remembered about the armed forces.

But then it turned out that the newly-minted fascist government suddenly had an enemy, in the person of the Russian population of Novorossia and the Russian Federation, whose traditional occupation is the defeat and destruction of these very fascists. When "polite people" appeared in Crimea, Kiev realized that they had publicly spoken and passed laws quite enough for the Russians to begin to consider them fascists. And if Russians see fascists somewhere, offending someone, then very soon they come to tanks and arrange a tribunal for the fascist leadership. It was here in Kiev that they remembered about the army. The junta started rattling weapons and make one militaristic statement after another. They already announced mobilization, and led the army into increased combat readiness, collected money from the population via fuel and sent troops to the east and south, to the borders of Russia and Crimea, and assigned racially and politically loyal national patriots to each commander. of SS Right Sector.

But, despite these actions and belligerent rhetoric, in Russia, in the West, and in Ukraine itself, everyone is well aware that the fighting capacity of the Ukrainian army is zero. Even the army of Saakashvili, who fled in panic and without regard, throwing weapons, in August 2008, compared to the current army of Ukraine, looks like a powerful, technically equipped and efficient unit. So what do the Fuhrers of Kiev count on? Obviously, they can only count on one thing: the fact that the Russians will not enter into military conflict with the soldiers of the Ukrainian army, because there are many Russians and Russian-speaking Ukrainians among them. That is, the Ukrainian army is used as a hostage or human shield.

The situation today is such that, even without confronting the enemy, the Ukrainian army suffers losses in military equipment and people. Only from News and videos of recent days, it is known that the Ukrainian army lost: 2 armored personnel carriers, which fell from the vehicle platform that transported them, 1 infantry fighting vehicle, which burned down due to a short circuit, 1 army truck, which flew off the highway into a ditch, 5 tanks that burned down in the boxes , 1 Su-24 plane that crashed on landing. Unfortunately, there are already victims and dead. And these are only those cases that became known. Taking into account the deplorable state of technology and the lack of training of soldiers, it must be assumed that there are probably much more such cases, not to mention the fact that they could not start much at all.

In general, the Ukrainian army, heroically suffering losses, serves as a human shield for the self-proclaimed Kiev authorities. It is located along the borders with Russia like hostages, which are put by terrorists at the windows of a seized building, so that they (terrorists) are not opened fire.

PS If the situation in Ukraine worsens and the fascist formations start shedding the blood of civilians, then the Russian troops will receive an order to conduct a peacekeeping operation in Ukraine. Today it became known that the President of Russia signed a decree on the recognition of military ranks and documents on military education of the military of Ukraine. This means that the Russians can agree with the Ukrainian military, who for decades have not been needed by their own authorities and are tired of hopelessness, that they will not fight for the illegitimate junta, but will join their brothers and defeat the fascists with them.

Ctrl Enter
Noticed oshЫbku Highlight text and press. Ctrl + Enter
We are
About Stalin and KhrushchevWhat you didn't want to know about England
Military Reviewin Yandex News
Military Reviewin Google News
115 comments
Information
Dear reader, to leave comments on the publication, you must sign in.