Joy and bitterness of spring 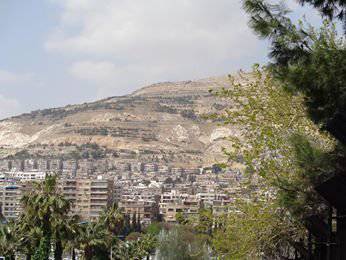 The blooming month of March is contradictory and alarming. Many tragic events for the Arab world began in March. In 2003, 20 March, US aggression began in Iraq under the fabricated cause of "chemical weapons". In 2011, 17 March was adopted by the UN Security Council resolution, which implied the introduction of a no-fly zone over the Libyan Jamahiriya, and March, 19, France, the United States and other NATO countries, hiding behind this resolution, but began to massacre Libyan cities, although nothing Such a resolution of the UN Security Council was not intended. So in Syria, exactly in March of the same year, unrest began, which later resulted in outright aggression, only conducted indirectly, and by proxy through the hands of mercenary terrorists.


But March is not only tragedy. These days, Syria celebrates two holidays at once - Teacher's Day and Mother's Day.

President Bashar Al-Assad met with a delegation of Syrian teachers. He congratulated the representatives of this most peaceful profession on the holiday and stressed that they are fulfilling their duty to the country, despite the fact that many of them were often threatened by terrorists.

The head of state, commending the courage of the Syrian teachers in the face of the crisis, noted that they are fighting against "backwardness and dark ideas that threaten society and future generations."

Indeed, sometimes just going to work and doing your professional duty is courage. Do we, the citizens of Russia and the republics of the USSR, not understand this? When during the Great Patriotic War our schoolchildren continued to strive for knowledge, in spite of the fascist bombardment, hunger and aggression, there were also teachers who did their duty, thanks to which one of the best generations was brought up and restored the country as soon as possible. Now and before the Syrian teachers face the real challenges. “Oppositionists” terrorists often bombard schools with mortars, blow up educational institutions, and kill teachers and their families. During the crisis, gangsters killed more than 300 teachers and university professors.

So in these spring days when yellow jasmine and white tangerine trees bloom, when everything in nature tends to live and reaches for the sun - the militants continue their dirty deed.

17 March in the province of Damascus in the village of Al-Barada was a terrorist attack using a car bomb. Two citizens died, 14 suffered.

On the Umayyad Square in Damascus, a mortar shell was fired by terrorists. Two people died, 11 injured. In the Christian quarter of Al-Kassa, 2 people were wounded by mortar shards

On the same day, in the city of Homs, a mined car exploded in a square in the Zahra quarter - this attack killed six civilians, and dozens were injured.

On March 18, shells were fired at Al Khal in the Zablatani area of ​​the city of Damascus, as a result one person was killed and 10 were injured.

In the province of Damascus, the city of Jaraman was fired with mortars. Four citizens died, 20 suffered. Among the wounded - two children - 8 and 10 years.

The city of Dzharamana is one of those who steadfastly opposed the terrorist attacks throughout this time, and the gangsters constantly avenged its inhabitants - explosions and shelling were also used. Over the past year, more than 170 people have died in constant attacks.

In the east of the country in the province of Deir-ez-Zor in the village of Hadzhin "crippled car" criminals laid in a passenger bus. Three people were killed, seven were injured.

In the city of Homs, the neighborhood of Al-Mahatta was shelled, two people were killed, there are wounded.

20 March, on Teacher's Day, in the city of Homs, gunmen shot at a school in the quarter of Karm ash-Shami. 4 people died, 19 injured.

In Damascus, in the Qudsey area, three shells fired by bandits resulted in the death of three people, including children.

Meanwhile, the Syrian army was able to achieve major success in the province of Homs. On March 20, in conjunction with the detachments of the people's militia, the servicemen cleared the Al-Hosn area adjacent to the famous Krak des Chevaliers fortress. A few hours later, the Syrian national flag was hoisted over the fortress itself.

The terrorists captured the medieval monument at the beginning of 2012, killing guards. Since then, from there constantly went raids on neighboring settlements. The warriors who defended the peaceful settlements and the simple, innocent citizens became the victims of the bandits. Now the hotbed of violence is eliminated.

During the stripping operation, many members of the gangs were eliminated. Some of the terrorists tried to flee from the Al-Hosn area to neighboring Lebanon, but were destroyed by the army team.

And in the province of Rakka, in the city of Tabka, people who had been abducted by terrorists were freed by the army of 48. They arrived in the city of Ham.

Ctrl Enter
Noticed oshЫbku Highlight text and press. Ctrl + Enter
We are
Bashar al-Assad: In Syria, not the “revolution” that the enemies are talking about, but the revolution of the army and the people against terroristsSyria: Americans scare themselves, and Asma Asad buys chairs
Military Reviewin Yandex News
Military Reviewin Google News
18 comments
Information
Dear reader, to leave comments on the publication, you must sign in.