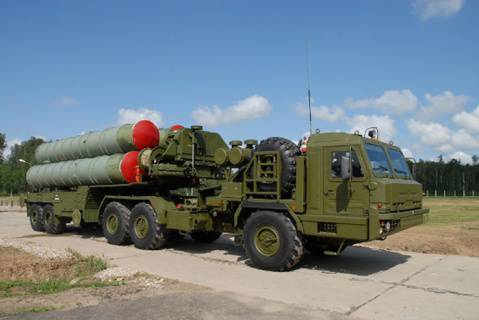 In the Moscow suburb of Zvenigorod, 17 March, the 93 th rocket regiment of the Aerospace Defense Forces (WKO) took up indicative duty. The servicemen laid wreaths at the Eternal Flame in the center of Zvenigorod. The priest blessed and sprinkled the holy waters of soldiers and officers. Before that, two months the regiment mastered the new technology - the C-400 Triumph anti-aircraft missile system (ZRS) at the Kapustin Yar testing ground in the Astrakhan Region.

The S-400 SAMs are designed to destroy any aerospace attack weapons - airplanes, both strategic bombers, and escort fighters, AWACS flying radars; tactical ballistic missiles; shock reconnaissance drone devices and everything else that is closer to 400 km.

The missile regiment consists of the Pantsir-S anti-aircraft missile and cannon complexes. They intercept low-altitude cruise missiles, which will be aimed at objects belonging to the C-400 system. And there are quite a few such objects. There are a dozen radars of various purposes alone. This allows detecting and identifying 36 airborne and low-orbit space targets simultaneously for sight. Of course, C-400 can intercept low-flying targets, but spend on them a rocket at the price of 21 million rubles. sorry

The C-400 complexes are already armed with two regiments of the Moscow region - in Elektrostal and Dmitrov. The Zvenigorod regiment is turning into an anti-missile and air defense shield from the west of the capital of Russia. Until the end of 2014, another regiment - in the southern direction - will receive new C-400 and Pantsiri missiles. Thus, the small circle of the defense of Moscow will be closed. And start forming the next, big circle. There absolutely new systems will be in perspective

C-500 and Vityaz, capable of intercepting the nuclear warheads of intercontinental ballistic missiles.

This year, about 2 trillion rubles will be spent on rearmament of the army of the Ministry of Defense of the Russian Federation. We are mainly talking about expensive missile defense and air defense systems, Su-35 fighters, new submarines armed with strategic missiles. These are all means of defense and nuclear deterrence.

Recent events in the world, including those near the borders of Russia, show that they do not stand on ceremony with the weak. International laws, rules, morals and the UN Charter do not matter to those who have the power. In the eyes of the whole world, they bombed and dismembered Yugoslavia - a country with a market economy that did not threaten the West.

The following case eloquently testifies to the attitude towards Russia. After Russia imposed a veto on the United Nations in the UN banning self-determination of the peoples of Crimea, the right to which is enshrined in Article 1 of the UN Charter, representative of Russia Vitaly Churkin was literally attacked by the US ambassador to the UN Samantha Power, shouting that Russia “has no right to forget that she is not a winner, but a defeated one. ” The video of the incident became a hit on the Internet and was repeated by many TV channels.

Nobody considers the defeated one an equal partner. With the vanquished do not stand on ceremony. Mrs. Power still shouted that “Moscow’s behavior is outrageous because Moscow, blackmailing the US with nuclear weapons, humiliates America. " That is, it is America’s legal right to humiliate Russia as a victor in the Cold War.

But Russia did not lose, but stopped the cold war. And it has not ceased to be a great power, pursuing foreign and domestic policy without regard to overseas "winners". And so that they do not want to try our country to the tooth, creates aerospace defense. If in the USA self-defense is taken for blackmail, it is possible to correct the error only by further strengthening the East Kazakhstan region. Such realities contribute to the improvement of political vision.