Cognitive dissonance of the Maidan 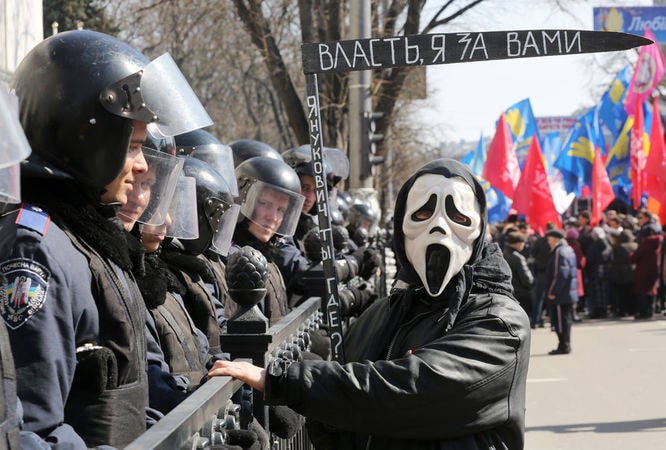 Recently, a widespread phenomenon has spread in Ukraine, which I cannot call anything other than voluntary collective schizophrenia. A large number of people diligently ignore objective reality. And it would be okay if they were illiterate rural residents, so there isn’t - well-educated citizens, who have access not only to the “zomboyaschik” of a censored Ukrainian TV, but also to alternative sources of information on the Internet.

Despite this, they all repeat the same false propaganda stamps word for word. Reality constantly refutes their imagination, but they either do not understand this, or simply do not confess. Which inevitably leads to cognitive dissonance across the country.

Reality: according to all classical political science definitions, an oligarchic armed coup occurred in Kiev. As a result, characters who could never come to it through elections came to power.

Imagination does not believe: Democrats and European integrators have come to power.

Reality patiently proves: Turchinov usurped power, directly violating the Constitution and other laws of Ukraine. "And about. President ”cannot be the Supreme Commander, does not have the right to appoint ministers of the power bloc, has a number of other significant limitations of authority compared to the current President (all this is grossly violated by Turchinov and the company). In addition, Turchinov combines the positions of heads of legislative and executive authorities. The last one who assumed the same authority was Adolf Hitler.

Imagination is not inferior: we have the triumph of democracy.

Reality: on euromaidan even during its peak days there were less than 1% of the population of Ukraine. In addition, according to sociologists, approximately 65 – 70% of its participants are unemployed residents of rural areas from Western Ukraine. Therefore, euromaidan is an insignificant minority of Ukrainians, besides not representative.

Imagination: "the whole will of the people."

Reality: the most severe censorship is underway. Almost all TV channels and most news sites broadcast "the only correct line of the party." Dissent and dissidents are intimidated, beaten, arrested and harassed.

Reality: after the interim government came to power, the economic situation is rapidly deteriorating.

Imagination: Yanukovych and Putin are to blame for this. Personally.

Reality: the euromaidan is practically filled with xenophobic and Russophobic rhetoric from the beginning. “That is not jumping, that Moskal”, “Going out of Moscow view”, “Moskaliv on a knife” and even “wild Asian hordes” (which is another direct reference to the Third Reich, because the author of this expression is Dr. Goebbels).

Imagination: there is no xenophobia that you that you!

Reality: militants of ultra-right factions (“White Hammer”, “Trident named after Bandera”, “Viking”, “Patriot of Ukraine” and others) and football ultras who have a frankly racist and Nazi ideology, run on Independence Square. This is confirmed by xenophobic chants, symbols (various swastikas, runes, Celtic crosses, inscriptions “14 / 88”) and even an interview by the Maydanovites themselves, who do not consider it embarrassing to admit all this.

Reality: “hundreds of Maidan” have been actively engaged in banditry for several weeks. Practically not a day goes by without firefights, robberies, looting, car theft, flagrant cases of racketeering, unmotivated violence, arson attempts, and other clearly criminal manifestations.

Reality: residents of the south-east of Ukraine gather huge protest rallies against the illegitimate "interim government."

Imagination: all Ukrainians are for Maidan, and only "titushki" protest. Putin brought them to Ukraine in the hundreds of thousands.

Reality: attempts to seize the regional administrations of the southeast were made by visiting "guest performers", mainly from Western Ukraine. Residents of these cities have created people's guards of self-defense and repulsed (and continue to repel) these attempts. For example, in Kharkiv, out of several dozen detained attack aircraft, only one turned out to be a Kharkov citizen, the rest were brought by buses from other cities.

Imagination: local supporters of euromaidan were “beaten” by mercenaries brought from Russia.

Reality: in the Crimea, polite people maintain calm and order (in Sevastopol, the crime rate has even decreased compared to the usual).

Imagination: the evil Putin and his “bloody gebnya” plan to arrange a genocide in the Crimea, so the local population must be urgently evacuated.

Reality: the list of victims from the supporters of the junta has been calculated in hundreds, if not thousands. The number of victims of "polite people" - zero.

Reality: The American aircraft carrier is drifting in the Aegean Sea and is not going anywhere. But even if he wanted to sail to the Black Sea, the Montreux Convention legally prevents this, and physically the bridge over the Bosphorus.

Imagination: the US Sixth Fleet will sail from day to day and arrange Armageddon for the damned Muscovites. Purely for the love of "Ukrainian freedom-loving democracy," yeah.

There is a neurotic picture of the world, completely divorced from reality. Why it happens? The outstanding social psychologist and philosopher Erich Fromm has long given an exhaustive answer to this question.

First, the stark contrast between the rosy expectations of euromaidan and the frightening reality of its results leads to the strongest frustration of its supporters. The psyche of these people tends to suppress the frustrating experiences, and the easiest way to do this is by ignoring or denying the disturbing facts. Moreover, external attempts to bring such people to reality cause only aggression. “Leave us our illusions,” they seem to shout, “we have nothing more than them.”

Part of their consciousness understands the depth of the situation. That a dictatorship has been established in the country, in the capital and other cities, gangs of far-right groups are boundless, a sharp rupture of economic relations with Russia leads Ukraine to default, Ukraine is losing some of the territories and can break up altogether. There is an underlying understanding, but for changes neither strength nor desire. It is easier for weak people to deny reality than to admit its unattractiveness.

Secondly, supporters of the Maidan are ashamed to admit even to themselves that in the situation prevailing in Ukraine there is also a share of their guilt. As Erich Fromm wrote, ordinary people panicky fear responsibility. Therefore, they are shifting it to anyone - to the former opposition, to the circumstances, to the “goodies” (previous power) and, of course, to the machinations of the “evil Muscovites” in general and Putin in particular.

Well, the third factor is public expectations. More precisely, the ideas of these people about what others are expected of them (and the desire to meet these expectations). For example, they believe that “patriotism” is right, therefore, they demonstrate it in every way (but they may not pay taxes for years or work for the interests of third countries). That is, it is not profound beliefs, but a form of conformism. And, of course, massive anti-Russian propaganda in the media plays an important role in shaping this perception of reality. As Mrs. Hudson said, "so writes the Times."

Ctrl Enter
Noticed oshЫbku Highlight text and press. Ctrl + Enter
We are
A great interview with Sergey Lavrov: about Ukraine, Obama and IranWhat you didn't want to know about England
Military Reviewin Yandex News
Military Reviewin Google News
70 comments
Information
Dear reader, to leave comments on the publication, you must sign in.