Pebbled skin of our independence 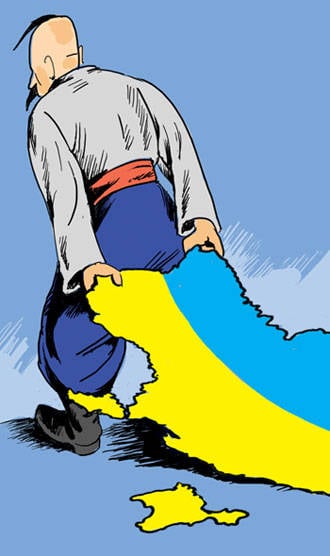 Honore de Balzac, whom Ukrainian schoolchildren hardly ever read, and at best heard of such a writer from their parents, brilliantly described all those metamorphoses in which we were unhappy to be. Alas...


A young man, Rafael de Valentin, wanted to drown in the river Seine, but before an hour of settling accounts with life, he went into an antique shop, where he acquired a talisman - shagreen leather. On its back was squeezed text in Sanskrit, which promised the owner of the artifact fulfillment of all desires, but in exchange for reducing the size of the skin and, accordingly, the owner's life. “With every desire I will descend, as if your days. Do you want to own me? Take it ... so be it! ”

The geographical and political map of modern Ukraine reminds me of balzakovskaya shagreen skin. Those who 22 February seized power in the country with the help of armed force, still have not realized that, in addition to the protest Maidan, there are citizens in this country who do not support Kiev. After the overthrow of the “wicked Vlada”, the new power, as in the case with the Balsakov hero, obtained the desired, but shagreen skin diminished. A new political elite is unable to make wishes and at the same time not lose anything. Ambitions do not correspond to the possibilities, despite the support of the whole retinue community.

Our Prime Minister A. Yatsenyuk asked the UN Assembly V. Churkin a question that worried the new government most of all: “Do the Russians want war?”. Churkin, of course, replied that they did not want to. Arseny Petrovich heard the answer and on his return to his homeland made a convincing appeal to the Ukrainians. His speech was based on the principles of the catechism, when the lecturer himself asks the question and answers it himself. That is, the listener does not have, according to the speaker, other options for answering questions that he himself asks.

Arseny Petrovich was convincing, I will not hide. He spoke extremely seriously, in Russian, outlined the moments of the country's rupture and suggested methods for its combination. He promised unprecedented freedom to the regions, both financial and ideological. But even if he is not cunning, but sincerely believes in his program, how is this possible in the foreseeable future?

Which of the activists of the "Right Sector" voluntarily hand over firearms weapon? NO ONE.
How can political tolerance and respect for dissent be combined, say, in relation to the South-East, if some of the new Kiev ministers are carriers of neo-Nazi ideology? NO.
When will the arrests of the leaders of the protest movement in the same South-East stop? NEVER.

We 23 year said that tomorrow will be better than yesterday. The young people who supported the protest against Yanukovych did not see the bulletins and agitations of 1991, which were stamped under L. Kravchuk for a referendum on our independence. On one side were, actually, questions about independence, and on the back side - a detailed decoding of how Ukraine feeds the entire USSR, and if it (Ukraine) stops doing this, then any citizen will be able to buy three cars for one year.

Comrade L. Kravchuk! I have long wanted to ask you: where are my 69 (23x3) cars? Probably in the same place as our Black Sea Fleet, as I understand it? We all years of our independence live with a stable idiosyncrasy to our “politicians”. They all the time tell us tales about the great future of the country and don’t give a finger to make this tale come true. Nightingale fables can not be fed for a long time - will die.

I personally do not believe all the promises of “new” politicians. I am fed up with these bright prospects for future happiness. Who wanted to build a state, he has already done it. After all, you probably do not know that Belarus is still being given FREE apartments? Of course, I do not know what Ukrainian TV channel will tell about this? More important for us is the heating of the Russophobic theme. We have free apartments are distributed by you know to whom. Those who yesterday opened criminal cases against maydanovtsev, and today with a speed worthy of surprise, opens up cases against anti-Maidan. The law is harsh ...

After the collapse of the USSR, we had neither the past nor the future, only promises of how wonderful everything will be tomorrow. And so 23 of the year. The only pity is that shagreen leather, which has covered the whole of Ukraine, is squeezing, crushing ordinary citizens, and not those who make wishes.

Ctrl Enter
Noticed oshЫbku Highlight text and press. Ctrl + Enter
We are
About Stalin and KhrushchevWhat you didn't want to know about England
Military Reviewin Yandex News
Military Reviewin Google News
252 comments
Information
Dear reader, to leave comments on the publication, you must sign in.