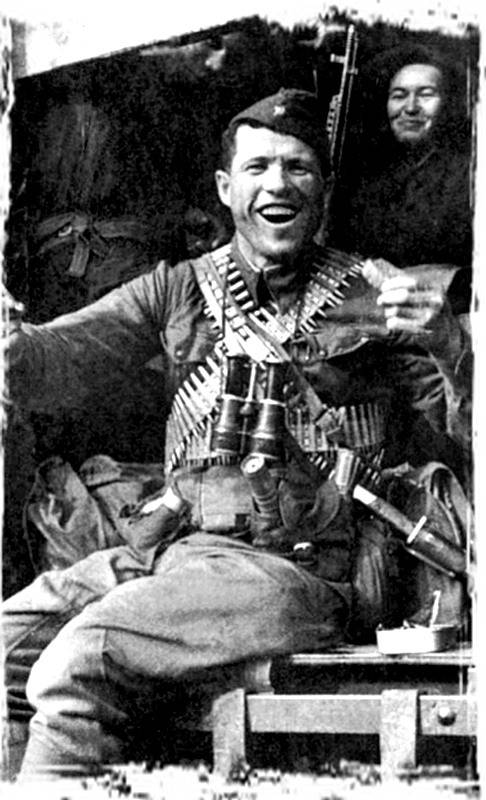 Dmitry Romanovich Ovcharenko. Born in the village of Ovcharovo, Kharkov Province (now in the Trinity District of the Luhansk Region) into a peasant family. Dmitri's father was a rural carpenter. Elementary education, 5 classes. He worked on the farm. In 1939, he was drafted into the Red Army. Nonpartisan

When he was born, he declared himself in such a cheerful cry that the parent was frightened: there were German invaders in the village. Kaiser Wilhelm in the eighteenth year seized the Ukraine and brought Hetman Skoropadsky to power. The newborn did not know about it, did not understand that in the occupied area a peasant son should behave quietly. The mother was surprised when, following the first cry of her baby from the street, ecstatic voices of men, women, and children came. Someone dissolved a window, and the sounds of a song burst into the room. A man with a saber over his shoulder took off his star helmet, shook his forelock, and, gently pressing a tiny creature to his chest, exclaimed:

Tears came to her throat. Her heart sank. She cried and smiled. Under the happy red star was born her Mitya.

When he grew up, his father taught him to own an ax. In the long autumn evenings and in the winter cold, no stories have ever heard enough about the ax Dimka.

“Once the whole village took up axes: the Kaiser fighters strongly annoyed ...”

For all his life Dima remembered this story about how popular anger flared.

- Such was the chopping, that just hold on! - concluded his father, and his eyes glittered mischievously.

Oil painting: it was the 13 number, near the fox village ...

On the fronts of the Great Patriotic War - from the first days. In the very first days of the war, Dmitri was lightly wounded, and he was transferred from the drill unit to the ammunition depot. 13 July 1941 of the year in battles near the town of Balti (Moldova), when delivering ammunition to his company near the town of Arctic fox of the sled machine-gun company of the 389 rifle regiment of the 176 th army of the Southern front, the red army soldier D. R. Ovcharenko with a detachment of soldiers and officers of the enemy number of 9 people. At the same time the enemy managed to take possession of his rifle.

However, D. R. Ovcharenko did not lose his head. Having pulled the ax out of the wagon, he chopped off the head of the interrogating officer, threw grenades at the enemy 3, destroying the soldier 21. The rest fled in panic. Then he caught up with the second officer and cut off his head too. The third officer managed to escape. Ovcharenko collected from the dead weapon, documents and maps and along with the cargo arrived in the company.

By decree of the Presidium of the Supreme Soviet of the USSR from 9 in November 1941 of the year "for exemplary performance of combat missions of command on the front of the fight against the German fascist invaders and for showing courage and heroism to" Red Army Ovcharenko Dmitry Romanovich awarded the title Hero of the Soviet Union with the award of the Order of Lenin and the Medal " Star". 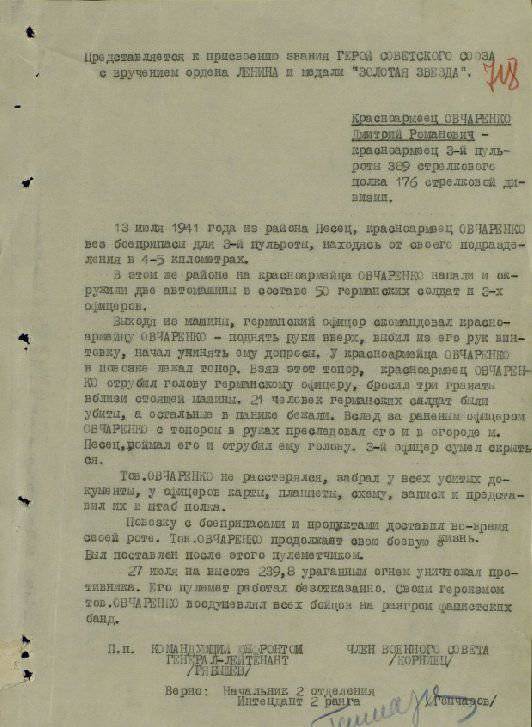 Representation of Dmitry Ovcharenko to the title of Hero of the Soviet Union, signed by the commander of the Southern Front, Lieutenant-General D. I. Ryabyshev and a member of the Military Council, L. R. Korniyets.

Dmitry was reinstated as a machine gunner and continued to fulfill his military duty. Commander Dmitry noted the high fighting spirit of the fighter, who on July 27 at height of 239,8 with his hurricane machine-gun fire set an example to his comrades.

In the battles for the liberation of Hungary in the area of ​​Sheregeies station, the 3rd machine gunner tank brigade Private D. R. Ovcharenko was seriously injured. He died in hospital from his wounds on January 28, 1945.

Nails would make of these people -
It would not have been stronger in the world of nails!

Eternal memory to you!

Forgive us, Dmitry Romanovich, for the fact that we are not so ... 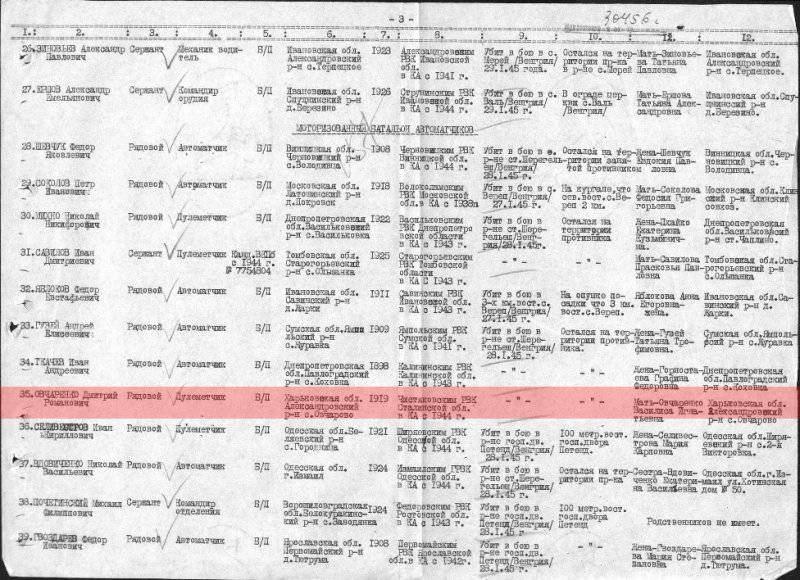 Information from the report of irretrievable losses. Scan of the document from OBD "Memorial". Note the typo in the document: the year of the 1944 call is indicated

The investigation is led by wits.
How could this happen: a modern interpretation of the event

Despite its seeming improbability and the strange name of the locality, it is most likely a real история. The town called Pesets (in Ukrainian Pesets) exists: this village is located in the Novoushytsky District of the Khmelnytsky Region. And from the Moldovan city of Balti is not so close to you, but, in principle, not so far away. Just in the rush of the offensive, the Aryans-Yubermenshes lost their vigilance and really got what they deserved.

Fifty Nazis - a clear exaggeration: the capacity of the "Hanomaga" (Sd Kfz 251) - 12 people, including the crew. If the truck - then maybe more: the 15 man in one. In reality, the fascists were 27-30. See - goes cart with one "subhuman." We stopped. Ain the officer went to interrogate the Russian Mongolian, or, most likely, simply decided to make fun. What did he want to learn from him? How do I get to the library? The rest got out, who according to need, who had a drink, and who aired his head. And, it seems, they barked a moment of dostoevschiny, when they were planted with a tomahawk between their eyes to a too talkative officer.

It is clear that Ovcharenko did not demolish the head of the officer. Most likely, he just stabbed him like a grandmother like Raskolnikov. The ax is not a rifle, the shot is not audible, and if Ovcharenko also successfully planted, the fascist did not have time to gasp. Fussing around the cart comrades killed could be regarded as issuing a portion of the slap on a sluggish Red Army man.

Or maybe they didn’t even look in their direction, after all they didn’t meet the cavalry division, but Sancho Panza, one battered and dead tired.
If someone watched, then 100% was taken aback by what he saw, because then the film "Rambo" has not yet been removed, and such 3D effects were new:

- What kind of chaos !? He did not say a word, but immediately with an ax on the board!

Our fighter, having eliminated the noise on the right, grabs three grenades from a wagon and hurls it in the direction of a German picnic on the side of the road. Imagine: you are sitting on a July afternoon in the company of normal boys from the right area, your friend left to purr nerd and then ... GRANATE falls next to you! It is not known what happened at this moment in the heads of the bewildered Nazis, we can only assume:

Whatever they thought, it exploded notably. The Germans - who completely, and who in parts, fell to the ground. Certainly not one of the fascists could have imagined that some kind of “beaten child of the East” (the definition of the Slavic brothers according to Goebbels) would take offense at the simple question:

The final is logical: one of the Fritz was killed, who ran away. In addition to one officer who didn’t have enough impressions, he decided to check if he could run fast with a half-torn ass. Our hero caught up with the German Paralympic and made him like Papa Carlo Buratina. I did everything right: why run around the gardens of the settlement of Arctic Fox? After all, not you swede planted - not you and trample it.

Then the laws of drama come into play: only one is left alive. After the bloody bath-house, the Red Army man Ovcharenko gathered test trophies and drove on with his business, which he had quite a few, unlike the German dolts who darted for ambiguous purposes in places where they were not happy.

Known and such a case. A Red Army soldier Vataman killed ten Germans with “Panzerfaust”, wielding them like a mace. The fighter either ran out of ammunition, or it was more handy to drench the reptiles. 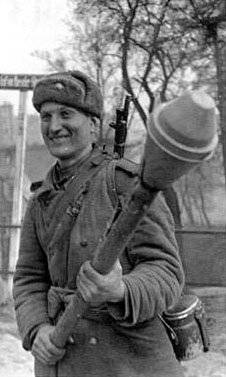 That fighter Vataman demonstrates the technique of possession of “Panzerfaust”. "Eh, dubinushka, let's go away!"

And there was another such case. A Red Army soldier Sereda climbed onto an enemy tank and bent the ax with a blow of an ax. I didn’t give a run around the pole, you know. After that, the platoon was able to rise and rush to the attack. And in another battle, he hit a enemy tank with a bunch of grenades, destroyed the Nazis' 20, and captured three of them. 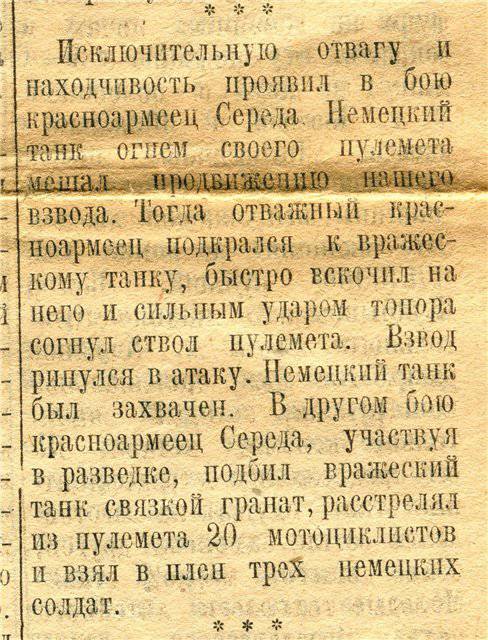 Red Army man Sereda: they wrote about him in the newspaper