And not a friend, and not an enemy, but a strategic partner with their own interests. 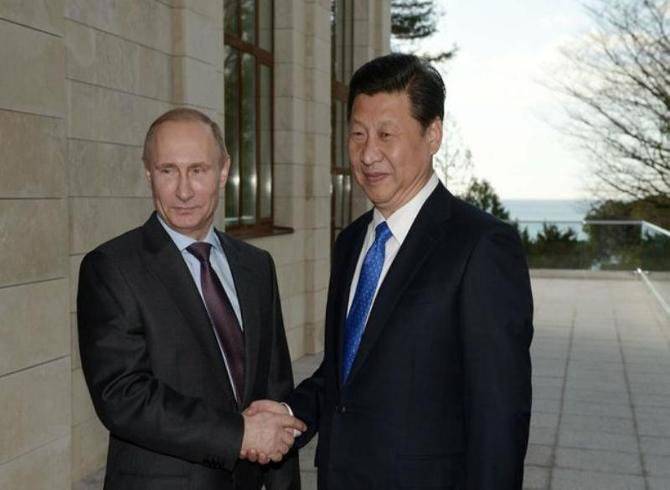 In defense of its interests, Russia is not at all as alone as other media are trying to impress on us.

The foreign policy position that we have taken has been supported by China more than once - a player whose political weight in the international arena the West cannot underestimate. And allied relations of Beijing and Moscow (here it would be necessary to spit three times over the left shoulder), whatever one may say, seriously confuse all the cards to adherents of unipolarity.

In the case of the Crimea, however, one of them could hope that in this case China’s position might not be so solidary with Russia. Yet, unlike the situation in the Middle East, in this case, Russia is resolving a rather personal issue.

In addition, theoretically, Beijing could in fact try to use the situation to start a new territorial dispute. But what if? This is just a dream for strategists somewhere in the State Department.

But - only a dream. For some reason, Beijing is in no hurry to use such a great trump card, but it unequivocally expresses support for Russia - in particular, through an editorial of the Xinhua news agency, the significance of which, by virtue of understandable parallels, is comparable to the editorial in the Pravda newspaper of the USSR. That is, it is precisely the position of the government, and not just the “dear editorial board” who decided to speak out about the sore.

And, remarkably, in some places the official material (which is beyond any doubt) set out in the material, Beijing’s position is an exact summary of Vladimir Putin’s speech before parliamentarians and public figures last Tuesday in the Kremlin.

In particular, the direct reproach in applying the policy of double standards is noteworthy. “From Kosovo to South Ossetia, as well as from the Comoros to the Crimea, Western countries apply double standards in international affairs, based only on their own interests,” writes the collective author. “The same fact — for example, the declaration of independence — the West always evaluates differently: sometimes it calls it“ national self-determination, ”if the development of events meets its interests, and if not, it condemns such steps as“ separatist activities. ” Such actions of individual Western countries resemble a “split personality”, and it is difficult for them to earn the trust of the international community. ”

And this is no longer just support for the Russian position in Ukraine, but absolute solidarity with Moscow in a principled view of the policies created by Washington and Brussels, where “the concepts of decency” are put above the letter of international law, and if the latter goes against them, then for them (rights ) worse. And the authors of the article just as a result call for the Western world to be different: “From Iraq to Afghanistan, and also from Libya to Ukraine, Western countries all the time promoted justice and human rights, but they brought only distress and suffering, as well as unrest and anxiety. Why then is democracy and morality, exalted to the heavens by Western states and exported to other countries, often create chaos and turn brothers into enemies? ”

The asked question answer, apparently, will not find. He is rhetorical and rests, it is necessary to think, in that hoping in this world, which is divided primarily in Western liberal discourse into friends and foes, at some universal notion of decency is fraught with great disappointment.

In an interview with a KM.RU columnist, political analyst, chairman of the supervisory board of the Institute for Demography, Migration and Regional Development, Yuri Krupnov, urged not to be too enchanted by China’s support:

- I will not be original: Russia has only two allies - the army and the navy. Therefore, it is not necessary to say that China in this case, as in others, is our ally, but above all that Beijing is building the right strategic partnership, in which he pursues his own interests. After all, according to the Chinese themselves, their state is the middle one, located in the very center of the world; the rest of the states, including Russia, are considered by them, if not as barbarous, then definitely as alien.

In this sense, we should not so exaggerate the importance of support from Beijing. In addition, China has enormous interests in moving towards the European Union and creating bridgeheads, which can already be clearly seen from the techno-industrial zones under construction near Minsk, as well as the willingness to invest in the same Crimea and to consider several other options. In this regard, China, of course, needs a stable Eastern European part of the former USSR, where it can deploy bridgeheads for maximum penetration into the economy of the European Union, that's all.

Actually, the positions of China on Ukraine and, oddly enough, Japan were consolidated during the meeting at the opening of the Olympic Games in Sochi and, in fact, were already fully involved in the events for the annexation of the Crimea.

One simple thing must be understood: the conflicts of the world community with Russia are in fact of no interest to Northeast Asia. All the speeches in support of the position of Russia on their part are diplomacy, supported by strategic interests. Indeed, as it is easy to guess, in a situation, alas, the imminent severe economic crisis of Northeast Asia will be of interest to any sales markets.

Ctrl Enter
Noticed oshЫbku Highlight text and press. Ctrl + Enter
We are
Moscow and Beijing: a new testWho will be the next victim of destabilization in the Middle East?
Military Reviewin Yandex News
Military Reviewin Google News
51 comment
Information
Dear reader, to leave comments on the publication, you must sign in.