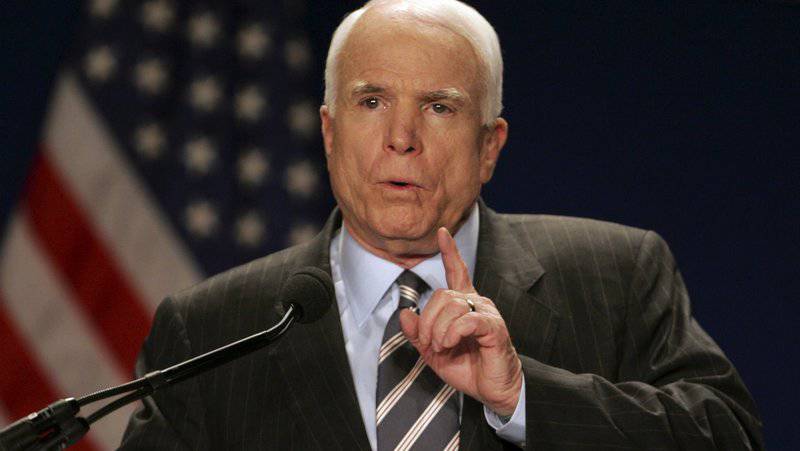 Neoconservatives and especially aggressive “hawks” in the US Congress diverted from Iran and al Qaeda and turned their anger on the new (old) enemy - Russia.

In a desperate search for ways to justify the bloated national security budgets and aggressive military interventions across the ocean, the “hawks” in the Republican and Democratic parties are trying to do everything possible to further exacerbate the Ukrainian crisis. In their desire to punish and demonize Russia, they are ready to take measures that could lead to a political catastrophe and plunge the world into a new cold war.

President Barack Obama initiated a non-military retaliatory strike that the United States intends to inflict on Russia after its invasion of the Crimea, which, in turn, was the response of the Russian leader to the coup d'état in Ukraine. However, Putin did not bring the crisis to a dangerous point, while the United States has certain responsibility for its beginning, because it supported the protest movement that led to the overthrow of the democratically elected president. Obama canceled visas for more than a dozen Russian officials, postponed meetings scheduled in preparation for the G8 summit in Sochi, canceled trade negotiations and consultations with the Kremlin on armaments.

The next steps, which are being considered in the White House and the Senate, are sanctions against Russian companies and a program to finance the new, pro-Western Ukrainian government, which also includes representatives of extreme right-wing neo-fascist groups. The tension only intensified when the inhabitants of the Crimea (mostly Russian-speaking) unambiguously voted for joining the Russian Federation.

In the US government, there were hysterical cries for the return of 1938 of the year, when the Munich agreement of 1938 of the year allowed Adolf Hitler to annex part of Czechoslovakia. Former Secretary of State Hillary Clinton accused President Vladimir Putin of his actions resembling Hitler’s actions on the eve of World War II. Neocons call Obama weak, claiming that his refusal to bomb Syria allowed Putin to consider that he could invade Ukraine with minimal consequences.

Senator McCain sadly sighs that the United States cannot go to war with Russia. “I would like us to have a military version ... I do not see the possibility of a military version, and that’s the whole tragedy,” he said.

However, the reality did not stop the neoconservatives from calling for measures that could lead Ukraine to a complete and final catastrophe. Here are five such measures:

1. Missile defense on the border with Russia

11 March, an article was published in the Wall Street Journal, the author of which claimed that “an adequate response to the use of force from Russia should be a demonstration of force from our side. Deploying a missile defense system in the East would be a good start. ”

This idea was also expressed by Republican Senator Lindsey Graham: "If I were on the site of President Obama, I would have returned to plans to deploy missile defense in the Czech Republic and Poland," he said in an interview with CNN. Democratic Senator Dick Durbin also supported this idea.

Plans to deploy missile defense in the Czech Republic and Poland were made by the Bush administration to counter the threat from Iran and rejected by the Obama administration in 2009 in order to improve relations with Russia.

The previous major crisis in relations between the United States and Russia arose in 2008, when the war was provoked by the Georgian side. Georgian troops with the support of the United States attacked South Ossetia - a region that wanted to remain independent of Georgia.

After the dust raised by this war had settled, Russia safely took control of South Ossetia and Abkhazia, although most countries did not recognize their independence.

Now that events in Ukraine have come to the fore, some are calling for Georgia to join NATO - a military alliance formed during the Cold War in order to oppose the Soviet Union. In 2008, NATO officials rejected a proposal to admit Ukraine and Georgia to the Alliance, which would mean an obligation to provide military assistance in the event of aggression against any of its members.

This did not happen, but the idea itself still enjoys great popularity among the “hawks”. The conservative National Review published an article calling on NATO to admit the two countries mentioned above in response to Russia's actions in Ukraine, which could easily lead to a dangerous confrontation between the United States and Russia.

These analysts ignore the fact that such actions would become part of what Russia has been observing for decades at its borders. Stephen Cohen, one of the most authoritative American expert experts on Russia, explained in an interview with Newsweek: "We, like Western Pakman, are hungrily devouring everything in our path until we run into Russian borders." Cohen warns that "we are on the verge of war with Russia."

3. Military exercises near the Russian borders

The US Navy missile destroyer is already taking part in exercises with the warships of Bulgaria and Romania in the Black Sea, not far from the Crimea.
American fighters are expected to take part in exercises in Poland. These exercises are planned to expand in response to the Ukrainian crisis. In addition, NATO sent two reconnaissance aircraft to Ukraine to keep abreast of the movement of Russian troops, while the US-backed Ukrainian government is conducting military exercises aimed at demonstrating force.

Former Vice President Dick Cheney was a key figure in waging the Iraq war — the neocon dreams, which quickly turned into a nightmare. But the past failures of Cheney did not satisfy his military appetites.

Speaking at CBC 9 in March, Cheney said that the United States should "provide military support to Ukraine in terms of technology, training and other things."

Such actions could embroil the US in the Ukrainian-Russian conflict. As soon as the situation escalates (for example, the Ukrainian or Russian military will start shooting), it can slide into complete chaos.

Perhaps the most fantastic idea of ​​the neoconservatives was expressed on the pages of the Wall Street Journal - this is the hope that the coup in Kiev will inspire the Russians to revolt against Putin. The article says that "the Ukrainian battle could spread to Russia."

“The best revenge of Kiev would be to inspire Russian freedom fighters,” says the editors of the Journal. That is, they would like to see how Russian citizens take to the streets and organize a coup d'état.

It is very unlikely that something like this will happen. Despite the fact that Putin has taken a number of repressive and anti-democratic steps, his popularity remains quite high.

Ctrl Enter
Noticed oshЫbku Highlight text and press. Ctrl + Enter
We are
Results of the week. "I will tell everyone how far the PZh figurine has brought the planet to it"Bashar al-Assad: In Syria, not the “revolution” that the enemies are talking about, but the revolution of the army and the people against terrorists
Military Reviewin Yandex News
Military Reviewin Google News
44 comments
Information
Dear reader, to leave comments on the publication, you must sign in.