March 22 2014
292
Starting this week, every resident of Russia from a pensioner to an oligarch, from the owner of a construction car to the owner of a car of 400 “horses”, from a guest worker to the president, has learned that now our country lives in a “regime of severe sanctions”. This was announced not only for Russia, but also for the rest of the world (primarily, naturally, for “progressive humanity”) news publications of our "partners".


Western leaders are competing in who will express more terrible words addressed to Russia in connection with its position in the Crimea. And the term “sanctions” itself, it seems, in the last decade of March seems to be at risk of becoming the most popular term in the world. Politicians of the so-called “leading countries” repeat it on any convenient and inconvenient occasion, earning for themselves either political points or the title of Honored Comedians of the Planet.

The title of honored humorist of the European Union can be awarded to Angela Merkel, who last Thursday said the following:

At the upcoming summit it will be clear that we are ready at any time to introduce the third phase of punitive measures if the situation worsens.

The phrase "punitive measures" - from the mouth of a German politician ... You have certain mania from the famous German past, Angel ...

From such “threats” of the Federal Chancellor, apparently, we should become terribly fearful ... But from the words “the third phase of punitive measures” it turns out quite the opposite ... It turns out that the first two phases are already in place. Is that so? Apparently, now it is necessary, at least for the sake of decency, to pretend that we “feel the sanctions to the fullest extent” of such sanctions in order to play along with Mrs. Merkel.

But the lady of the comic stage from the EU is still far from the real leading figure of planetary sparkling humor. The phrase "sanctions against Russia" sounds from the lips of Barack Obama - the creator of such masterful humorous tricks as "Winner of the Nobel Peace Prize", "American Diplomacy", "Support for democratic values", "Come back, Snowden, I will forgive everything" and "Pass it on to Vladimir ".

Without going into details once again about what threatens Russia with all these "punitive measures", taken, apparently, by "punitive detachments", it is worth noting that the more you move your eyebrows and frown your "face" the West, the it causes great irony inside Russia itself.

By the way, about the gloomy "faces" ... The West did not have time to talk about sanctions, as "our" democratic of democratic ones instantly responded - Russian-speaking Wikipedia, burst into "encyclopedic" article "Sanctions against Russia (2014)" as much as 19 with footnotes . That same Russian-language Wikipedia, in which, for example, Arseniy Yatsenyuk is referred to as the legitimate prime minister of Ukraine on a page that was blocked for several days to make corrections (well, so the “free” encyclopedia ...) That same Russian-language “free” and “ informative ”Wikipedia, in which Sevastopol administratively has a“ controversial ”status ... Yatsenyuk's status is not disputed, and, you understand, the status of Sevastopol is controversial. Informative, honest, transparent, you will not say anything. Well, God be with him, with this "source" ...

The Russians looked and watched a couple of days at all these delusional threats about “punitive measures” and sanctions, listened to and listened to Western leaders, and decided what they called, going from the bottom up, to issue their “answer to Chamberlain”. Russia was literally overwhelmed by a positive wave of irony - "banter" about all the voiced Western sanctions and talk about them. In million-plus cities, regional centers and even provincial urban settlements. wonderful signs and mini-posters began to appear in which the most ordinary Russians openly deride threats against Russia from a number of foreign politicians in an original manner. Naturally, the main character was also chosen for the “symmetrical” answer, which Barack Hussein Obama, already mentioned in the material, became. Now Obama, having assumed extended obligations, personally “froze” the accounts of Elena Mizulina, Sergey Aksyonov, Sergey Glazyev and some other Russian officials, in an anecdotal plan runs the risk of even exceeding the recognized heroes of this national folklore - Petka with Vasilvananych and Stirlitz. True, if these heroes play in jokes most often positive roles, then Obama, even in jokes under sanctions ...

Judge for yourself. The Russian people forbid him to go to a barbecue in Makhachkala, to stroke cats in Novgorod, to sit in a taxi in the Orenburg region, to use a cooler in Mytishchi, to make purchases in the Omsk shopping center and to park their car near the kindergarten of Voronezh.

In addition to Obama, the Russians “imposed” sanctions against such “friends of Russia and Ukraine” as John McCain, Hillary Clinton, Dmitry Yarosh, Vitali Klitschko, John Kerry, Irina Fahrion, Francois Hollande. These persons are forbidden to feed pigeons in Saratov, donate permet in Perm and to celebrate the large and small needs in the public toilet of Khabarovsk ...

We present to your attention a selection of photos from different cities of Russia, where you can see all those points of sanctions imposed by Russians against the above-mentioned ladies and gentlemen. 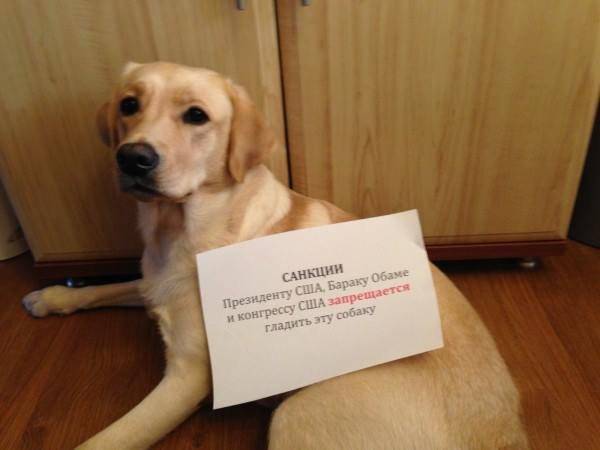 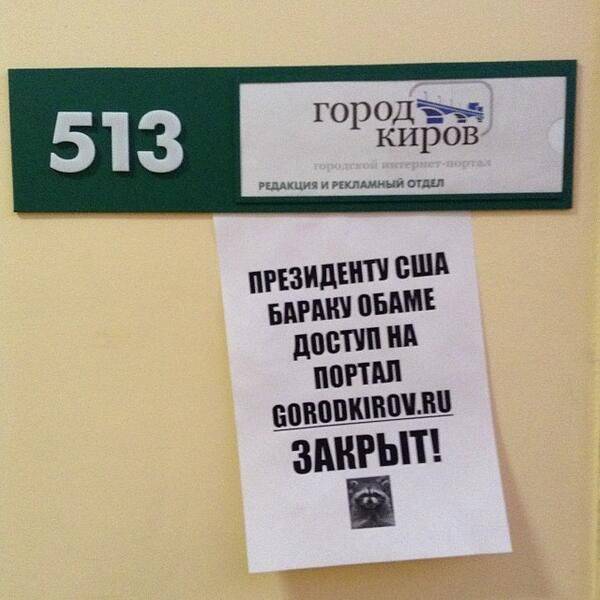 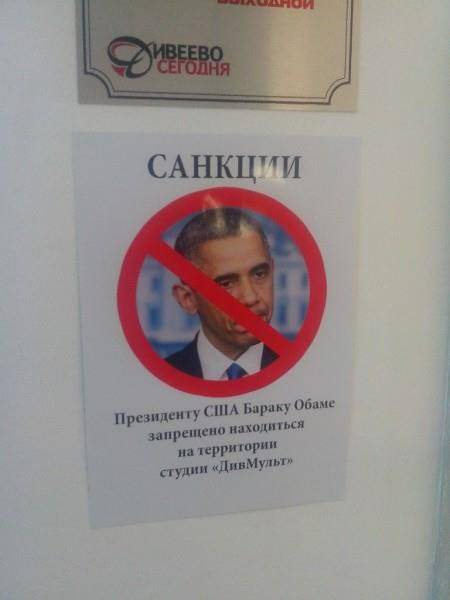 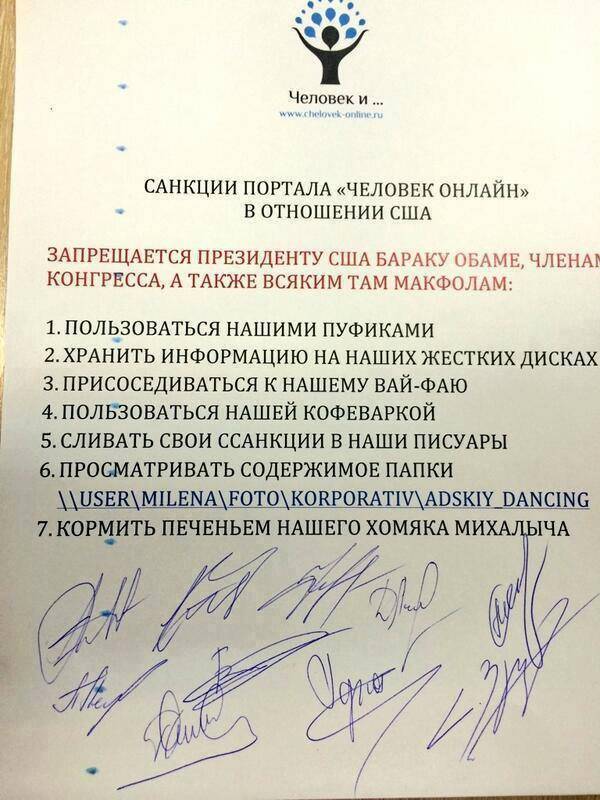 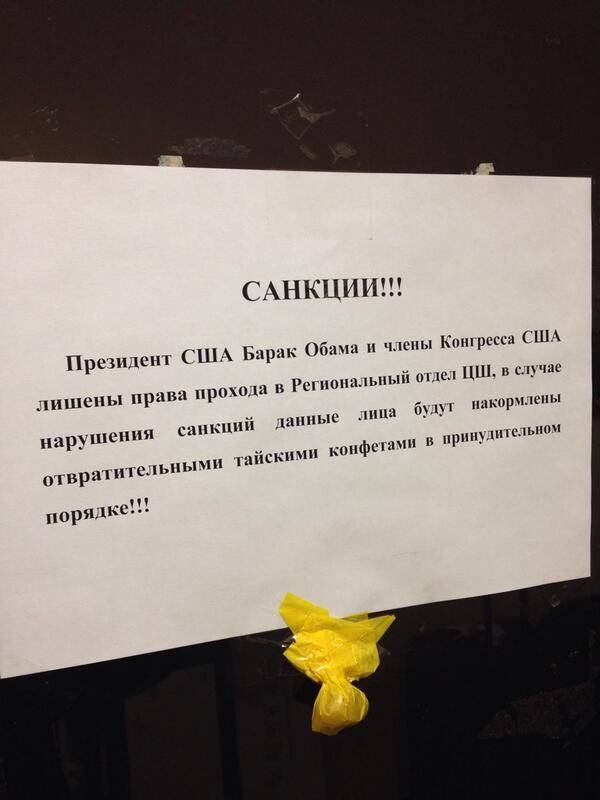 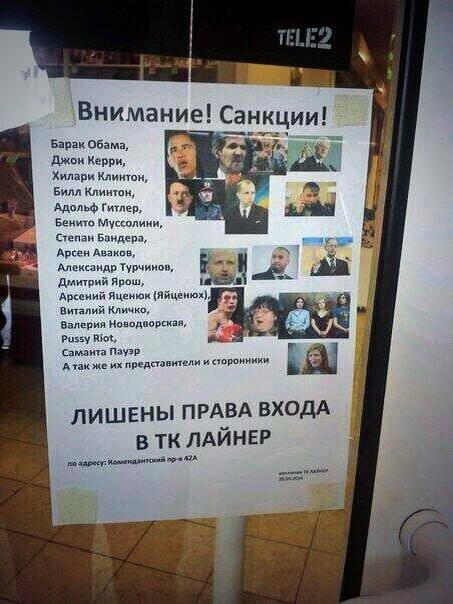 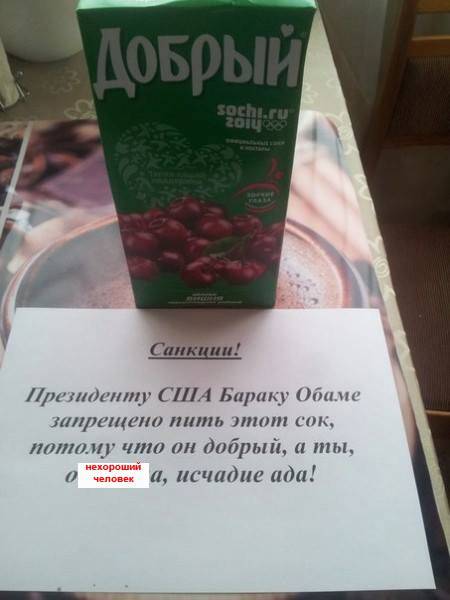 Guided by the position of the world around the world, the publication "Military Review" introduces its own severe sanctions against Western officials who did not recognize the results of the referendum in the Crimea, and forbids them to comment on this article ... If the situation worsens, our moderators will introduce the third phase "sanctions against the persons mentioned ... We do not play around ...

Well, seriously, there is no greater force against Western sanctions than the Russian people themselves. We are now almost 146 million. And if every sensible person, at least during one trip to the grocery store, gets instead of the western, offhand, “cookies” product produced in the space of Russia or the Customs Union, then all these sanctions against the Russian Federation will go sideways exclusively to those who play our role "moralists". As a result: in our hands there are real countermeasures that no foreign manufacturer can ignore, and with it not a single foreign country thinking about the consequences.