So that's what they do in Russia with the oligarchs ... 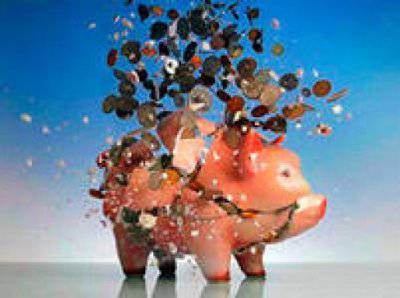 Until recently, I did not particularly analyze the state of the Russian economy and the actions of its authorities (at least, did not focus their attention on them). And then suddenly the Russian Federation was much closer and more significant than some would have liked. Therefore, now, at least for the near future, you will have to move your focus on her. My last article on the global economy and the role of Russia in it was sold very widely. Reading the comments under it on various sites, I noticed that some readers interpret the facts stated in it in a very strange and contradictory way. It became obvious that a continuation of the topic was needed, with additional explanations.


Whatever happens, some commentators are still dissatisfied and pessimistic: the ruble is getting stronger — it's bad, the ruble is weakening — it's still bad. Of course, there is a share of relativity and dialectics in this, but not within the same logic, the same criteria! Much of the critics from the “patriots” state that Russia will not be able to get out of the dollar space and go to mutual settlements with other BRICS countries in the national currencies of these countries as long as it owns significant reserves of dollars - this will hurt Russia itself, gold reserves (gold reserves). And at the same time they state that in the Russian Federation a significant amount of strategic assets (up to 70%) belong to foreigners, which makes the economy dependent on external management. Two perfectly true and fair comments. But they completely ignore the current dynamics of the processes! And the current dynamics is such that it just solves these two problems, and is interconnected (and very beautiful). What happens to the Russian economy?

First, all analysts have been fixing the outflow of capital from Russia for a couple of months. And, as I have already noted, it is not investment capital that is leaving, but speculative. As a whole, it only benefits the economy. At the same time, inflated assets are blown away to a more realistic price, which is also positive. Moreover, even if the price of assets becomes slightly lower than their real value, this only makes them more attractive to capital investors, whose entry was previously hindered by speculators. At the same time, the state is able to partially buy up these assets by increasing its share in strategic sectors. And do it, mind you, on the declining trend. That "Buy low"! Secondly, the outgoing speculators are withdrawn from the Russian economy is clearly not rubles. Naturally, they are forced to buy dollars. And on the background of a low ruble, they have to do it at a disadvantageous rate.

What is the Russian government doing at this time? "Currency interventions in order to stop the depreciation of the ruble." Is it really stop? To stop them clearly not enough. If you look at it from the other side, then you can call selling dollars at a high price at the peak of rush demand. Sell ​​high! Moreover, the threat of an excessive fall in the ruble does not exist, since the ruble mass in turnover corresponds to approximately 350 billion dollars, and the gold reserves amount to about 500 billions. The 1998 lesson of the year is well remembered and accounted for. Theoretically, the Central Bank of Russia can buy all the cash rubles in nature and still remain (although in practice it will never be necessary). An additional factor of stabilization is the positive balance of foreign trade. For 2013 year in the Russian Federation, it amounted to over 208 billion dollars. This is both a possible source of replenishment of gold reserves in the event of their “weight loss”, and the guarantee that even a significant reduction in oil prices will not be able to carry out the same cruel joke with Russia that it played with the USSR since Gorbachev. To bring down the Russian economy, without bringing down the world economy, today is almost unreal.

I am already silent about the fact that such accumulation of capital is the most powerful modernization potential (how it can and will be realized is a separate topic). The lack of understanding of the essence of these processes is explained by the false analysis methodology of most experts. Even the majority of “left-wing” experts use such liberal concepts as “inflow / outflow of capital”, “investment attractiveness”, “stability of the course”, “threat of devaluation” and all sorts of false criteria for the effectiveness of managing the economy (which is to say about market liberals, which in their heads are only the dogmas of their blind faith divorced from reality). Which, of course, confuses understanding. There is no such confusion in the pure Marxist model. In fact, there is a disposal of extra dollars, the transformation of the gold and foreign currency reserves lying in a dead weight into strategic assets, with double profit along the way. Fiercely, applauding wildly. I do not know who is the author of this brilliant operation, but I want to see him in the Padawans. For contrast, I will give an example with the Ukrainian economy. It almost everything is exactly the opposite.

Only the cash hryvnia mass is approximately equal to the equivalent of 22-23 billion dollars. And the gold and foreign currency reserves are less than 15 billions (although there are unverified rumors that they are only 1,5 billion, but I think that it is just some citizens who confuse the gold reserves with balances in the Treasury accounts). Therefore, to bring down the Ukrainian economy is simple - you just need to “ask” the state to sell a couple of billion dollars. Accordingly, the trade balance is negative and is approximately minus 1,5-2 billion per month. In a situation of meager gold reserves, Ukraine faces a permanent threat of default, forcing any government to continuously and frantically search for sources of external financing (credit, of course). Of course, there is no talk of any modernization potential. At the same time, the share of state ownership in the economy is not 30%, as in Russia (where it also grows), but approximately 4-5%, with a constant tendency to decrease. And what does the interim government of Ukraine do? It is trying to urgently sell the remnants of this property, even at the cost of a significant underestimation of the sale value of assets compared to real.

That is, if it is short: inefficient, unprofitable, illiterate, in cons, without potential and reserves, to merge for a penny and get into new debts. And this is not only the fault of Yanukovich, but of the entire economic policy of Ukraine of the last 23 years. Including Tymoshenko and Yatsenyuk, who actively sold state property off 2005 and doubled the national debt of Ukraine in 2008-2009. As you can see, the contrast is striking. And why? The answer is obvious: in Russia, the state machine took control of the oligarchy, having dealt with the most odious characters (sending or planting them), and in Ukraine, the oligarchy took over the state, making it a mechanism for serving its interests.

You can, of course, disagree, but the facts - a stubborn thing.