What are we threatened by Western sanctions?

March 22 2014
166
In the light of recent events, Western politicians are increasingly calling for economic pressure on the Russian Federation. This material proposes to consider what methods of influence are in the arsenal of our partners in the fight against terrorism, when and how they were used, what could harm the domestic industry and economy, and also try to figure out what specific actions you can take to level the consequences of this kind external influences.

Perhaps the most "experienced" victim of Western sanctions is Iran. In the 1979 year, after the overthrow of the Shah and the establishment of the Islamic Republic, the United States, and then the EU, consistently imposed various sanctions on Tehran. Such as:

• boycott of Iranian oil products;
• freezing of assets on bank accounts (about $ 100 billion);
• an embargo and a ban on the activities of American counterparties in Iran, a ban on any economic exchange with the United States;
• a ban on international (by the way independent) organizations for issuing loans and any assistance to Iran;
• a ban on investing in the Iranian economy for non-residents of the United States (providing for countermeasures for those who conduct economic activity in the United States).

Thus, the Iranian economy suffered significant losses. In particular, the export of modern processing machines, automatic lines and other production equipment to the territory of Iran is prohibited. These actions are primarily aimed at Iran Khodro, the region’s largest and thirteenth (once) carmaker in the world. Such a ban has led to the fact that the company simply can not update its production base, and the results of this problem are quite tangible: a reduction in the production program from 1500 thousand cars in 2011 to 800 thousand in 2013. It is also worth noting that this area of ​​industry is dependent, a significant part of automotive components is imported, local suppliers are not available, or they are not competitive in terms of cost, quality and volume of production. Naturally, forced import substitution leads to a deterioration in product quality and a decrease in its export potential.

It is obvious that in this way Western (European) manufacturers squeeze a strong competitor out of the markets, and the initiators of their sanctions are agents of their will. 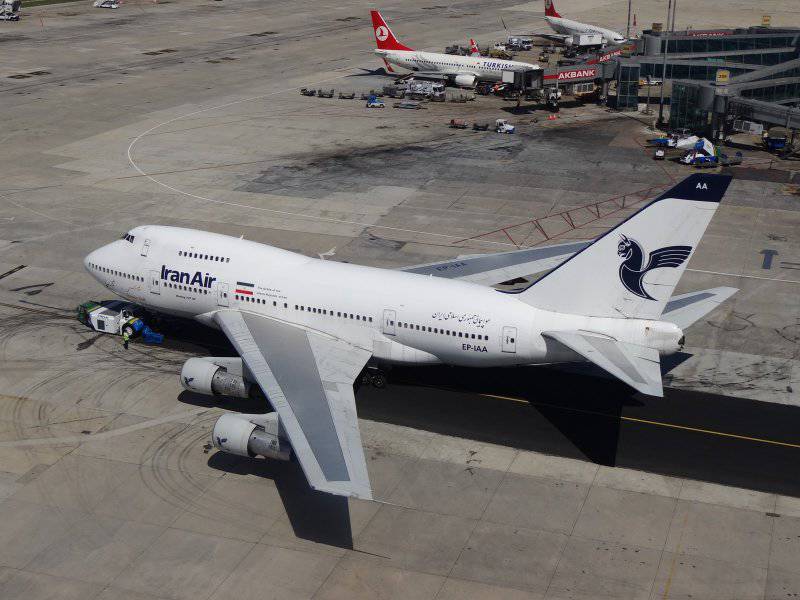 Boeing of the Iranian national carrier, released in 1976 year

The second significant example is the civil aviation Iran. Since the 70s of the last century, the United States, and after them the EU, has consistently banned its manufacturers (in the civilian ships market, there is a duopoly, the market is divided between Boeing and Airbus, that is, between the United States and Europe) to export aircraft to the territory of the Islamic Republic. And in the future, export of spare parts and components was also banned. Ultimately, morally and physically obsolete aircraft are operated in Iran, some produced even before the Islamic Revolution, for example, in 1976. And the most modern aircraft operating in Iran is the Airbus A-320 2003 model year. At the same time, components imported by roundabouts or locally manufactured parts, naturally not having the appropriate certificates, are used to repair aircraft.

Of course, Iran made an attempt to diversify and import substitution. So, in 2011, licensed production was deployed at HESA with a minimum degree of localization of the An-140 aircraft. At present, 8 airplanes are in operation; further development of the program is in question; new aircraft from the 2010 have not taken off. 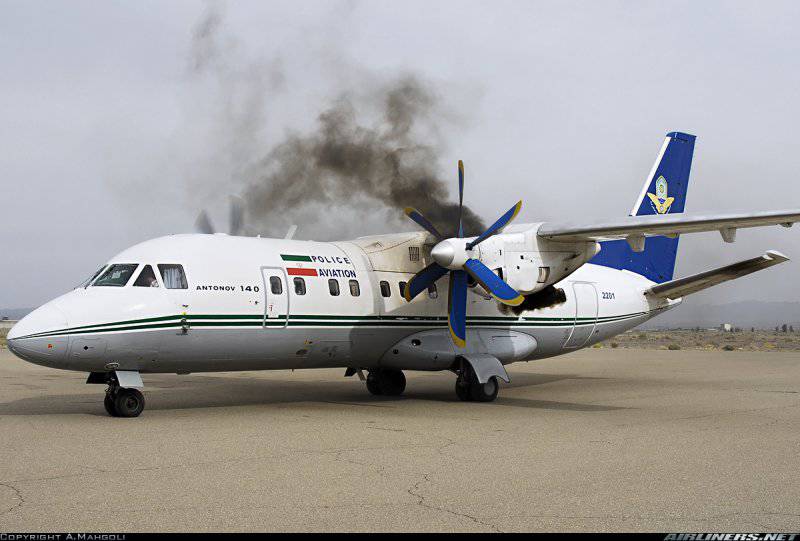 Launch of Iranian An-140 engine 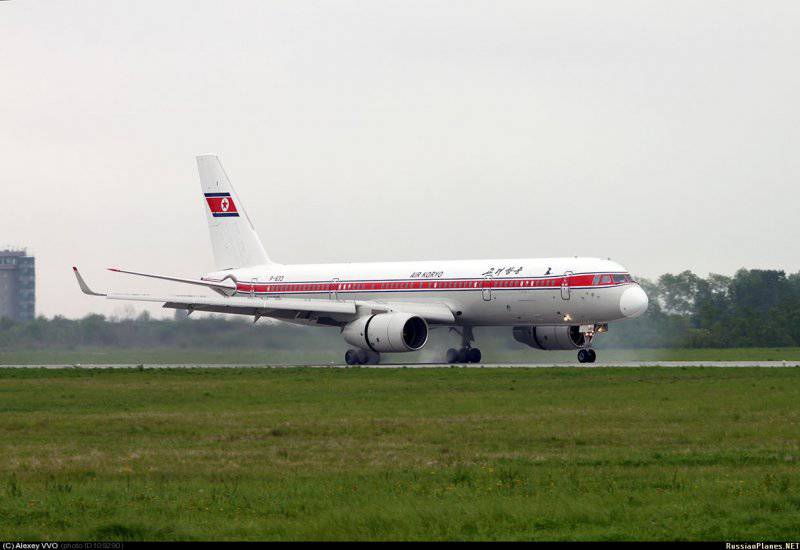 Since the mid-2000s. Russia is trying to sell Tu-204 aircraft of various modifications to Iran, but in vain. Several years ago, a large order was even announced for Iran for several dozen Tu-204SM aircraft. However, later it was reported that components with American intellectual property were used as part of the PS-90A2 engine, and the shareholder and owner of 25% of the Perm Motors holding company Pratt & Whitney (USA) blocked any work on the project due to sanctions against Iran. ... As a result, the contract was in limbo, but quite recently, starting in January of this year, restrictions on the supply of components and used aircraft were temporarily and partially lifted, which practically blocks oxygen from any attempts by Russia to sell a domestic aircraft to Iran. As you can see from this example, sanctions work, while they work when necessary and against whom it is necessary, there is no doubt about it.

What can cause sanctions

Recently, Russia has managed to significantly modernize its economy. For example, production of modern electric trains, Augusta Westland helicopters, cars of various brands, types and sizes was localized. Now we are flying mostly on modern airplanes, trains are becoming more comfortable, in Russia they produce modern TVs, refrigerators and vacuum cleaners. Some manufacturers of high-tech equipment even managed to build their factories, however, mainly assembly plants. Russia as a whole is well integrated into the international economic system, but ...

When the author received an education, he was informed that the basis of the country's wealth is the quality and reproduction of goods of group A (first of all, machines and equipment) produced in the country. As demonstrated above, to limit the flow of such goods to a particular country that is not able to reproduce them on its territory is a matter that lies in a purely technical plane. The production of machine tools and equipment in Russia over the past decade and a half has not simply not developed, but has been almost completely destroyed, the same problem exists with regard to tool production. For an example, let's take a look at modern high-tech production in Russia, for example, at their plant. Gagarin, collecting including Superjet 100 aircraft, which have quite good export potential, are in demand and are often perceived as a symbol of the rebirth of the Russian aircraft industry. Production of the main components of the aircraft fuselage takes place on the modern equipment Haeusler, Loire, Bystar, Water Jet, BYSTRONIC LASER AG, Forest-Line, Maza, DMF, Makino, Fooke-Endura, DMU, ​​GMX, Scholz. Of course, the special punching hydraulic press YAO 6017 is also used. Tools and spare parts for the above machine park are also imported, except for the domestic press, of course. It is easy to guess where the first blow will be sent in case of sanctions.

Also it should be understood that the same Superjet uses in its composition equipment produced abroad. The hot part of the engine and on-board equipment complex are manufactured in France, the plane incorporates American, German, British and even Korean components.

If you look at the automotive industry, it has practically lost its independence over the past decade, although the availability of high-quality cars has increased significantly. The last large domestic automakers, which have maintained relative independence, are KAMAZ and GAZ. But at the same time, for example, the KamAZ plant uses as part of its cars: 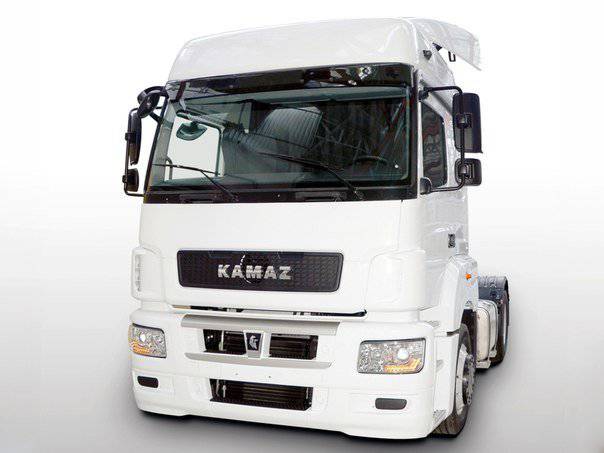 At the same time, only the frame, the outdated engine and the cabin, and then only in some modifications, will remain virtually domestic as part of the modern KamAZ vehicle.

Thus, the sanctions with the prohibition of the supply of this equipment will instantly stop the assembly line of the enterprise, forcing it to return to the production of obsolete products.

The saddest thing about this stories the fact that in Russia there are developers of domestic components who want to create high-quality products and have the appropriate competence. However, the activity of companies-innovators, those economic entities, on whose success the quality of domestic components depends, is confronted with incomprehension and resistance from industry.

An example would be Transas, a manufacturer of modern flight-navigation systems, whose equipment is not included in the newest Russian aircraft. Or one more example: the SuperVariator company has been developing a promising electromechanical continuously variable transmission for four years, capable of competing on equal terms with the latest developments of foreign competitors that are not yet available on the Russian market. During this time, a serious start was made in this direction. A team of capable engineers and developers was assembled on the splinters of a practically destroyed automobile industry, a rapidly degrading scientific school through unimaginable efforts, investors (including the state bank VTB) were found who invested tangible funds in this development. As a result of the work, a mock-up was created, tests were carried out, and even a preliminary design (which caused delight among plant technicians) of a commercial product for one of the Russian manufacturers was protected. And all this so that domestic enterprises do not introduce into their products foreign, outdated gearboxes that have long since descended from conveyors in Europe.

Sanctions, if applied, can hurt the most high-tech, and therefore, ensure maximum margins and a large number of jobs for industries, such as the aviation or automotive industry, space, radio electronics, etc.

To level the possible consequences, it is necessary to restore the machine-tool industry as soon as possible, organize tool production, and also organize a well-diversified, competitive production of components in Russia.

This can be achieved by investing in the real sector of the economy, in innovative and advanced developments, science, expansion and deployment of new production, its modernization.

Otherwise, Russia runs the risk of rapidly slipping to the technological level of the Papuans, losing priorities, competencies and markets, cutting jobs, especially in socially disadvantaged regions and single-industry towns.