Crimea began the acceptance of military equipment and personnel 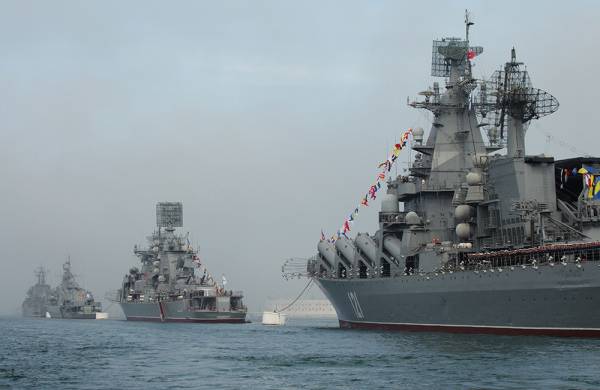 Morning in Crimea yesterday began with the outcome of the conflict situation that occurred the day before. The prosecutor's office of the peninsula reported that Rear Admiral Sergei Haiduk, temporarily detained by the head of the Ukrainian Navy, and seven other activists from among the supporters of the new Kiev government were released. The transfer of the admiral, literally as in spy detectives, occurred in the area of ​​the village of Chongar at checkpoints.

“The Minister of Defense of the Russian Federation, Army General Sergei Shoigu, appealed to the leadership of the Republic of Crimea to release the detained commander of the Ukrainian Navy, Rear Admiral Sergei Haiduk, and not to hinder his departure to the territory of Ukraine, the Russian military told RG.

Recall that the day before, after Admiral Haiduk left the naval headquarters in Sevastopol, he was asked to go to the prosecutor's office of the Crimea. The investigating authorities of the republic reported that they had questions to the admiral, who "transmitted to the military units of Ukraine the order that came from Kiev to apply weapon against civilians. "

At the same time, the head of the Russian military department, Sergei Shoigu, addressing his Crimean colleagues, drew attention to the fact that Sergei Gaiduk was forced to follow orders from his leadership, obeying military regulations of the Armed Forces of Ukraine.

Apparently, other Ukrainian servicemen who refused to remain on the peninsula will leave Crimea after the admiral. And they will have to go without equipment and weapons. Prime Minister Sergei Aksyonov declared this arsenal the property of the republic and ordered an inventory of the army and naval property.

Apparently, for some time, the former military camps of the Ukrainian army, along with their headquarters, barracks, technical parks and warehouses, will be under the authority and under the protection of the forces of the self-defense detachments. And as new structures of the Ministry of Defense of Russia are formed in the Crimea, garrison farming will be handed over to its representatives.

This does not mean at all that the soldiers and officers who swore allegiance to the republic will be replaced by the military from the "mainland." Those who came into operation seriously, for a long time and have the appropriate professional skills, will continue to serve now in the Russian army, including in command posts. However, it is clear that you cannot reliably hide the peninsula only with this contingent; in any case, you will have to create a varietal army group with your own aviation, air defense system, land and other components. Least of all problems awaits the sailors. The Black Sea Fleet has infrastructure in the Crimea; plans for the development of its ship and ground grouping have long been approved. Correcting them taking into account the Ukrainian marine equipment and infrastructure located on the peninsula will certainly not be difficult for our admirals. Prior to the recognition of the independence of Crimea, there were 15 surface ships and auxiliary vessels in the Ukrainian Navy, as well as one diesel submarine Zaporozhye of the Varshavyanka type. In addition, the arsenal of coastal units numbered about 40 tanks, about 180 BMPs, BMDs and MTLBs, as well as 230 BTR-80s and about 100 different artillery mounts. As part of naval aviation, there were about 10 aircraft, 60 multipurpose Mi-8s and Ka-25, Ka-27 and other anti-submarine helicopters. It is difficult to say which of this arsenal is actually located on the peninsula.

Therefore, first of all, our military will have to clearly understand what kind of "legacy" they have got. As the correspondent of "RG" found out, the special commission of the Ministry of Defense will most likely take care of this issue. They will include representatives of various species and genera, as well as industrialists. The first will appreciate the state of military camps, the second - the condition of the equipment and armaments there. It is possible that the army infrastructure of the Crimean garrisons will require some kind of rework. As for the arsenal, this is clearly not limited to “cosmetic” measures.

It’s easy to judge in what a deplorable form Ukrainian military generals kept their battle park by the now former 204 fighter airbase in Belbek. Recall that from the 45 of the MiG-29 planes available there and the four L-39 training aircraft, only five vehicles could fly — a link of “MiGs” and one “Elka”. Perhaps, some of this aircraft our military after the repair will include in the combat composition of the Air Force. Everything will depend on the degree of wear of fighters. But the Sparky L-39 defense ministry is unlikely to be needed. There are almost no such flight desks in the military aviation schools of Russia, they are now actively being replaced with modern Yak-130 combat training aircraft. Spending money on the restoration of the old "elok", to overtake this junk on the airfields of universities of the Air Force does not make sense. Therefore, at best, the aircraft will be transferred to DOSAAF, and most likely they will simply be disposed of.

Experts assess the situation with the Ukrainian ground equipment, systems and air defense systems not so critically. They say that with proper repair and maintenance, it can serve more than one year. However, the final word here for the military and industrialists.

In recent days, on the peninsula, they talk a lot about local recruits. Several thousand of these guys are now pulling the strap in the Ukrainian army, and local authorities, together with their parents, are puzzled how to get the guys home. Of the units of the Crimean people, they are not allowed to go and in every way "press" those who do not want to serve the self-proclaimed Kiev bosses. It can be assumed that maydanovtsy will make the guys the subject of bargaining: for example, they will agree to release them in exchange for the same military equipment. Just so, we will remind, in due time the terrorist Khattab did with the captured Russian soldiers. But Bandera is not far from him.

The situation with the service of young Crimeans in the Russian army is much clearer. The RG correspondent’s Ministry of Defense was assured that none of them would be invited to the line this spring. The draft plan in the General Staff approved, and no one will rule it. Especially since putting the guys in line with an “automatic” will not work anyway. On the peninsula, at first, it is necessary to change the system of military registration, each future soldier must receive Russian citizenship, undergo other mandatory procedures in this situation. But in the fall of 2014, the Crimean recruits may well replenish the armed forces.

Ctrl Enter
Noticed oshЫbku Highlight text and press. Ctrl + Enter
We are
Reports from the militia of New Russia for 7 September 2014 of the yearIn the Crimea, released the commander of the Ukrainian Navy Sergei Haiduk
Military Reviewin Yandex News
Military Reviewin Google News
45 comments
Information
Dear reader, to leave comments on the publication, you must sign in.