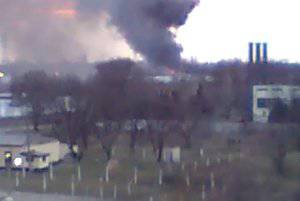 Thursday evening in Krivoy Rog in the 17th tank division fire broke out, as a result of which, according to preliminary data, two Ukrainian tanks burned down.


The servicemen claim that the tanks with a full ammunition charge were on fire alternately. During the fire on the territory of the unit, explosions were heard.

21: 00 Moscow time received a message that the fire was extinguished. At the same time, 0564.ua reports that the explosions are continuing.

It is known that in total in the garages there were at least 19 manned and filled tanks. Information about their condition yet.

Ctrl Enter
Noticed oshЫbku Highlight text and press. Ctrl + Enter
We are
Reports from the militia of New Russia for 27-28 September 2014 of the year
Military Reviewin Yandex News
Military Reviewin Google News
122 comments
Information
Dear reader, to leave comments on the publication, you must sign in.