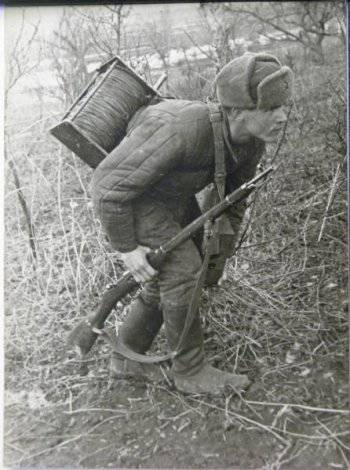 There were three brothers in the war.
I was the youngest and was the last to sign up on the front.

Against them, I was smaller, 193 cm tall, and asked to Aviation.
I was met - sent to the aviation training unit.
But I didn’t fit in the plane and met the war with an infantryman.
The brothers were heroes and did not return ...

First shot
After the retreat in the regions of Ukraine, after the loss of the unit, already in November of 1942, I became a signalman and was at the headquarters of the emerging reserve army in the city of Vologda.
And then on my duty the bell rang on HF - the comrade "zero first" calls the commander.
I act according to the regulations - after installing the telephone connection I go to the next room, pick up the second handset and listen.
I immediately recognized the voice of the Supreme. Everyone knew him well.
I sit, I listen ... The conversation began in common, and then I realized that they were not talking about codes!
I remembered everything from the first time, the instruction knew “by heart” and I heard that they were not speaking according to the instruction.
And in the instructions it was said that the operator is obliged to monitor its execution.
I turn on the "wire" and say:
- "Talk on codes."
I hear confusion in the conversation, but my comrades may have taken my voice as a hindrance and, after a pause, continue to continue the conversation.
Then I interrupt the conversation again and loudly demand:
- "Talk on codes!"
The Supreme asks:
- "Who says?"
The answer is:
- "The duty 29-th".
- "The name of?"
- "Sergeant Mikhalev".
Then the conversation stopped. Antonyuk is not audible, hiding, not breathing.
And at the other end of the line: "Puff, puff" - this is probably the Supreme got angry and puffing with a pipe, and then you could hear how the papers began to rustle (excellent audibility) - looking for a sheet with codes that he did not have at hand, did not prepare .
Then he found the right paper, called the commander on the codes, and the conversation they began "normal".

When the conversation ended, I did not notice.
It was interesting to listen to the voice of the Supreme.
I did not have time to get scared, as Commander Antonyuk flies in.
The door kicked off, ran in and stared at me.
And I stand at attention.
And then he screamed. The general shouted without stopping for at least a minute. Then he ran out, and then I heard from behind the door about the arrest and execution.
They arrest me right there in the duty room and lead me through the whole part.
They are locked in a former livestock building - in the north, these are excellent rooms made from thick logs.
Clean, good hay, so that, despite the cold outside, I was not cold in the barn.
I sit under arrest and read the charter - in 18 years it’s easier to say goodbye to life ...
But a day passes, the other - silence.

On the third day is the head of the guard:
- "Sergeant Mikhalev, on the way out!".
I go out and understand that once they lead without a belt, it means to be shot.
We arrive with a guard on the parade ground.
Here on the construction is the headquarters and personnel of the unit.
General Antonyuk stands aside, and next to him there are two with machine guns and one with a tablet.
Here to you, I think, and a sentence. There are tears of insult in my eyes.
The guard puts me against the authorities, I try not to look down on the general - above his head.
And then General Antonyuk solemnly reads me ... thanks to the Supreme!

Two days later came the order to increase vigilance.
I did not see Antonyuk anymore, but I heard the Supreme voice four more times and once entered into conversation with him.
This was before the start of the Battle of Kursk.
Then, in a similar conversation at headquarters, he recognized me and called me by name, asked what mood the soldiers had?
And what a mood — ready to go non-stop to Berlin — that was the mood! ..

Second shot
At the new observation post of the 63 Army headquarters (East Prussia) we, communications workers, organized a communications center.
We connected the commander, deputy commander, operational department, engineering department and all departments of the headquarters.
And here, it is necessary to happen, heard the shots.
Fut-fut - a mine flies and falls between our dugout (where the telephone exchange is located) and the cable, which received the ends of the wires from the commanders of the divisions.
And the shell tore our harness.

Before the arrival of the commander to our observation post, it was about 40 minutes.
Lieutenant Colonel Simkhovich is unknown for what reasons he became angry, leads us to the trench and gives the command: "Take off your clothes!"
I, along with Senior Sergeant Timofei Ivanovich Nikiforov undress.
Then we become, we look at it.
He is screaming:
- "Cheerful look"!
He unzips his holster, pulls out a pistol, and his hand moves with a shake - the arrows are bloody!
The view is not combat, but strong - a hand with a gun, trembles. If shot, then from fear.
I was indignant, raised my hand and said:
- "Comrade Lieutenant Colonel, I realized that you want to shoot us. But there will be no connection anyway!"
Behind you, the commander will come to this dugout and you will be shot in this trench. What are you doing?"
He answered his own question not according to the rules:
- "I am going to establish a connection."
Such intemperance of the lieutenant colonel did not have a decisive continuation, it seems that he himself was most frightened.
I didn’t spit a little in his eyes. Anyway, I think, he will shoot at his own fear.
He lowered the gun, and we began to change the harness.

Quickly established a connection.
And it is necessary, I check the last phone - and the commander enters.
I turn in my underwear to him and report:
- "Comrade Lieutenant-General, communication with all attached units is working normally. Mikhalev duty officer."
The commander silently passed, looked. Over each phone number of division is written. Asked:
- "Why in underwear? .."
“I was on duty, I rested,” I answered. “And then the mine broke the rope - there was no time to dress.”

Meeting on the Elbe or the third shooting
The last shooting took place on the Elbe 3 or 4 of May 1945, or rather I do not remember the date.
Our communications platoon came on foot from East Prussia.
Another 16 of April we were given an order to speak from near Koenigsberg, and on April 26 we already arrived in the suburb of Berlin - 1100 kilometers on the map in 10 days!
Elbe is not forced. We stopped a kilometer from the river.
Here our scouts met with the Americans. We met the next day, but in the morning we already knew about a possible meeting.

The matter was simple: some Americans arrived, others approached unorganized, then lined up against each other, greeted.
Our and their officers talked - what shall we do?
And what to do - let's fight! Come on.
For our part pushed me to fight.
As they said, we will fight, so immediately everyone looked at me. And after the concussion I became deaf and did not understand why this system was staring at me.
From their side came out an older American. He was 27 years old, and he was the same height with me - 193-194, see
Only in me 90 kilograms of weight, and in it kologramm 120.
But here is the end of the war, the mood is such that it doesn’t matter.
Before the war, as a boy, on the collective farm for 5 days I put 5 stacks, each with 20 ricks, each with 50 cops.
Physically was terribly resilient. So I didn’t have any fears of fighting an American.
Although I saw that the American is heavier than me, and he looked awesome.

We went to fight.
When they greeted me, I gently held his hand in my palm with my handshake, and by the way he was the first to pull, pull, I realized that he was weak.
I noted it.
Began to fight.
He grabs me, but can not capture.
Then he grabbed and began to wind. I feel it is not going there business - tear off the ground and throw.
Then I pressed him tightly to me and squeezed his chest against my so much that I looked - it was getting weaker.
I immediately threw him out of the arms to the side. He jumped up and come to me - let's go a second time!
The second time I did not wait - immediately grabbed his chest, hugged and squeezed again. I look, whitens, my eyes roll.
I still tucked and lowered. He limp completely. When I let him go, he fell.
Lies, does not move, but breathes.
Look, the American officer also has white face, unbuttons his holster and a pistol ....
I look back - our captain Nyrkov and other officers are not. What to do?
I do not want to wait when the American is in my room.
We must act. I go up, take his hand with weapons and gently squeeze it.
The American officer's face becomes like chalk and becomes stone.
The gun falls from his hand, and I throw it away with his foot.
But the officer somehow incomprehensibly everything turns on the spot and tries to turn sideways.
Here such silence reigned - in the ranks of ours and the Americans - the bumblebee is heard. Only an officer unnatural sideways trample.

And then one of our Cossacks, who stood in the ranks on the left, said loudly in silence:
- "Pissing!"
And for sure, it was clear from the back that the American officer’s pants were wet.
Here the air "crashed", as only a line of young soldiers can bang with laughter.
All of us laughed, and many Americans smiled. But they were immediately pulled up.
They were given a command, and they drove off across the river. No longer met with them.

"Memories of senior sergeant A. Mikhalev."
About the Author:
Awarded the medal "For Courage" for number 1340708.
For ensuring communication with the bridgehead is presented to the Golden Star.
The award has not yet found a hero.
Then, in December 1944, he swam across the r. Narev (over 300 m) under a hurricane of fire with a coil of copper wire weighing 20 kg, "gave the link" and pulled out of the water of his partner, too, with a coil of wire 20 kg. A partner was injured, but on the shore it turned out that he had already died.
Almost all cases of "shooting" the signalman occurred at the headquarters of the army.