Is the Night of Long Knives coming to Ukraine? 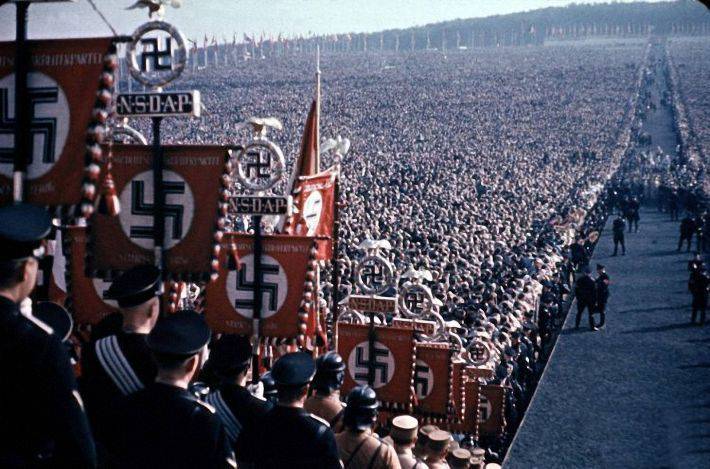 Dear readers, I would like to bring to your attention some of the thoughts that visited my head in the process of viewing and thinking over some materials.

It seems that everything that happens in Ukraine in March 2014 of the year has a significant similarity to the events that took place in Germany in June 1934.

What do we have in Ukraine now?

Triglav (more precisely, probably tripen) in power, which no one really supports and who has no authority. Moreover, there is a lack of unity in this very tripne. One yells about the introduction of visas with Russia, the second after some time cancels. There are many examples.

In fact, the structure of law enforcement has been paralyzed. Prosecutors - no. MIA - no. Special Forces - no. (Sunk, the functions of the "Golden Eagle" were performed by the "Titans", the presidential guard. Well, at least they still remained.)

Who and how supports the rule of law, we already know. And from that moment I start in more detail. What is left?

1. "Right sector". A large number of armed people who are not going weapon hand over. The request (it is a request, it is impossible to call this requirement) Yatsenyuk they simply ignored. But PS is no longer the PS that was a month ago. He is clearly split into two parts. Part One - Yarosh. With all the ensuing consequences.
Part two - Nalyvaychenko and the SBU.

And then what do we have? Nalyvaychenko - US hiring. Passed them the agents and everything else. It is clear where his owners are and where he wants. But Yarosh, then clearly saw the States in the same place as Russia. This is not his way, he has his cockroaches in his head. Bandera. And so far, Yarosh has a clear advantage in the number of "bayonets". Until.

2. Ukrainian army. Yes, she is in her worst incarnation, pulled either to the borders of Russia, or simply to the eastern regions. The movements of the Ukrainian army, to put it mildly, are not completely understood. But it seems that they are starting to mobilize and pour into her the last penny from the budget. Maybe something from this and out. Or maybe not. The money will run out, the fuel will run out, and the columns will stand where they will be caught.

3. National Guard. This is the most interesting moment. One of the trips, Turchinov, signs a decree on its creation. Avakov immediately rushes to create this very guard. "The National Guard of Ukraine is recruited by military personnel who perform military service under contract and conscription. The contract is signed for three years. The National Guard military, who sign the contract, will receive 1800 hryvnia hryvnia monthly" (website poltava.pl).

The question arises: what is the difference between the army and this very guard? Apparently, only in the matter of submission. The national guard passes on department of the Ministry of Internal Affairs. Avakov's zeal is understandable. The question is: why? Money nowhere to go? Yes, it seems, no.

The reason probably lies in the incapacity of the Ukrainian army and the full capacity of the SS. Apparently, tripen urgently looking for, or rather, creates a force that can be opposed to the forces of Yarosh. According to the proverb "Better late than never."

It is clear that the PS weapon will not surrender. For it is obvious that in Ukraine today the law is not driving, but the Kalashnikov assault rifle in hand.

That’s not a very nice analogy. Ryom and Strasser were also a force. And they had a well-trained army of attack aircraft, whose numbers exceeded the number of troops of the Reichswehr. But история remembers how it all turned out.

How the course of history in Ukraine will turn is not yet known. But the opposition of the nationalists (Yarosh), pro-Americans (Nalyvaychenko) and pro-Europeans (Avakov and tripen) is clearly visible. And the answers to the questions raised, to my great regret, can only be obtained through the next bloodshed.

Ctrl Enter
Noticed oshЫbku Highlight text and press. Ctrl + Enter
We are
A great interview with Sergey Lavrov: about Ukraine, Obama and IranWhat you didn't want to know about England
Military Reviewin Yandex News
Military Reviewin Google News
91 comment
Information
Dear reader, to leave comments on the publication, you must sign in.