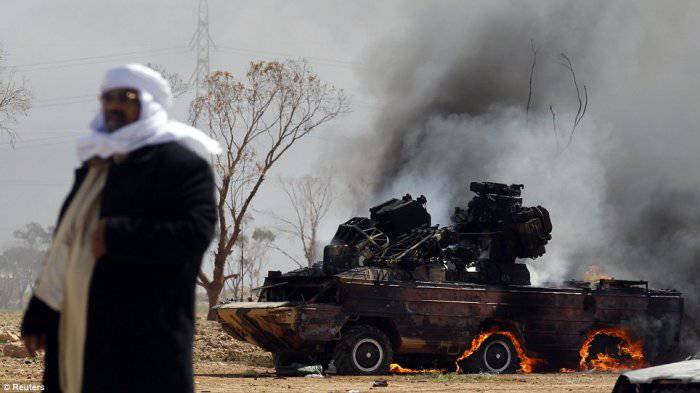 The North Atlantic Alliance began to discuss with Colonel Gaddafi the conditions of surrender, but not his, but his own.

The alliance's operation in this Arab republic is increasingly entering a military and political impasse. Almost three weeks of continuous missile and aviation strikes on Libya have not yet yielded any clear result to the West. By inertia, attacks on the positions of troops that are loyal to Gaddafi continue with the same regularity.

So, last Monday, NATO aircraft conducted 137 sorties. The very next day, 186, and on Wednesday, around 200, fighters and attack aircraft freely performed their flights in the Libyan sky. The results obtained are not at all expected. Gaddafi's troops occupied the previously lost Brega oil port. The siege ring around rebellions, which so far hold the city of Misrat, is narrowing.

Opposition representatives in Libya, meanwhile, have already begun to allow themselves to criticize the actions of the chiefs of Operation Odyssey. Dawn "of the alliance. So, Abdel-Fattah Yunis, head of the opposition’s military operations, recently reproached NATO for inaction and sluggishness. In his words, coalition combat aircraft are very often late with air strikes, inflicting them sometimes in 8 hours after the rebels pass on target data. This delay, which is caused by bureaucratic costs in NATO, leads to losses among the opposition, claimed Eunice.

At the same time, Yunis has nothing to hope that a miracle will occur and the effectiveness of the NATO operation will suddenly suddenly increase for some reason. Most likely, on the contrary. The United States said that their pilots were getting out of the battle, retaining the possibility for European countries to try military luck in Libya themselves. What Europe plans to replace American aviation is unclear. After all, in fact, it accounts for half of the air strikes inflicted on the colonel's troops.

The headquarters of the alliance has already sent a dispatch to London with a request to urgently send replenishment to the British aviation contingent. But the Ministry of Defense of England refused, having considered that his 22 “Typhoon” and “Tornado”, which have been fighting in Libya for a long time, are quite enough. More send aircraft prevents a large load of the UK Armed Forces in Afghanistan and sharply curtailed military budget.

Closer managed to drag except Germany, which had not previously agreed to the real participation in the military operation. And then Germany agreed only to participate in escorting ships going to Libya with humanitarian aid for the population.

Other allies are also not in a hurry to take greater responsibility for the outcome of Operation Odyssey. Dawn".

It seems that in recent times, even the United States, which traditionally set the tone for NATO, themselves do not believe in the possibility of victory on this battlefield. Gaddafi, apparently, will try to just buy. Bidding has already begun. In Benghazi, which is controlled by the opposition, arrived special representative of America Chris Stevens. As it became known, he has certain proposals for members of the Transitional National Council.

At the same time, in Tripoli, where Gaddafi confidently leads the fighting, the former member of the US Congress, Carth Weldon, arrived. Washington does not conceal the purpose of its mission. Curt Weldon must try to persuade the Colonel to voluntarily renounce the government of the country. It is said that Gaddafi was offered the post of honorary head of the African Union as compensation. Well, maybe something else. As an example, the possibility of the participation of Safe Al-Islam, the son of Gaddafi, in the post-war leadership of the country.

Can also offer money. After all, the money that at one time offered to the entourage of the Iraqi dictator Saddam Hussein, managed to quickly decide the battle for Baghdad. The leader of the Jamahiriya, of course, does not live in misery. But after all accounts of the colonel are blocked. And you can unlock them. Especially since the allies one day of war in this country costs about 4 million US dollars. So far, it has been reported that it may take at least six months to curb Gaddafi. So consider yourself ...

Nevertheless, undoubtedly, even the ex-Congressman Weldon himself does not quite believe in the success of his trip. In any case, Weldon has already told the New York Times that he, from repeated meetings with Gaddafi, concluded that it would be very difficult for this person to be forced to surrender with bombs.

In general, it is very possible that the operation “Odyssey. Dawn is leaning towards sunset. And it will be absolutely not the way NATO members saw it when the bombings began in mid-March. The analysis of the results of the military operation in Libya is conducted not only by the military, but also by politicians. And Libya does not seem to interest them at all. In the first place is the future of NATO, which, as it turned out, is not able to defeat the army is not a big and not very modern country. On this occasion, the American magazine The American Conservative recently wrote that participation in a military operation in Libya threatens the unity of the North Atlantic Alliance. Arguments that America should have intervened for the sake of NATO are not tenable.
Indeed, the split in NATO has been evident for quite some time. Recall, at least, what was the position of the European member countries of the alliance in relation to the invasion of the American army in Iraq.

Nevertheless, if after Iraq the outline of the split of NATO is only outlined, what will it be like after Libya? Alexander Khramchikhin, deputy director of the Institute for Political and Military Analysis, tried to answer this question. In his opinion, the arrival of the North American negotiators in Libya means the recognition of the failure of intentions to eliminate the regime of the leader of the Jamahiriya militarily. In addition, this means that the alliance in general, and the United States in particular, will face complete disgrace and great internal political difficulties for the heads of these countries. The results of this shame will be hard. First, the world will immediately ask the question - what is NATO in general, if it doesn’t achieve anything with an absolute technical superiority, fighting near its territory and having any rebel allies in the rear of the enemy? It is hard to imagine what changes for the West this all can lead to. It will immediately become clear that NATO has no future, Khramchikhin said. The fact that the alliance has no future is already being said for a long time, but after Libya, everyone will know about it. According to the political scientist, as soon as the USSR and the Warsaw Pact collapsed, the future of NATO also disappeared. After all, the purpose for which the alliance was created, has disappeared. But at NATO headquarters, in order to somehow justify their existence, they began to invent new goals for themselves. But at the same time, it turned out that the allies do not want to invest in new tasks. And everything goes to a natural finale.

According to Alexander Khramchikhin, Russia's concerns about the expansion of NATO to the east are a myth. Moreover, a mutually beneficial myth. So, the West needs this myth in order to preserve unity in the alliance under the leadership of America. Also in Russia there are quite a few interested people in the most diverse political camps. Khramchikhin says that the authorities are artificially raising anxiety about NATO, because they strive in the face of outside threat to rally the people around the Kremlin.

In connection with the events in Libya, the situation is ambiguous in the Muslim world, said the political scientist. Many Arab countries hate Colonel Gaddafi. And they are not only closely watching the unsuccessful attempts of the West to tame the colonel, but also actively take part in his overthrow.
Muammar Gaddafi tried to unite these countries against the West. In addition, in every way he tried to eliminate the regimes that collaborated with the Americans. In addition, several years ago, the colonel called the King of the House of Saud his enemy. Naturally, these countries want Gaddafi to leave. Khramchikhin is confident that the prestige of Europe and the United States after the Libyan war will fall in the Middle and Middle East, and in Africa. But only time will tell what their political and material losses will result in, says the political scientist.
Ctrl Enter
Noticed oshЫbku Highlight text and press. Ctrl + Enter
Military Reviewin Yandex News
Military Reviewin Yandex Zen
4 comments
Ad