March 21 2014
60
For 2014, it is planned to begin testing the head frigate of project 22350 Admiral fleet Soviet Union Gorshkov. " This ship is equipped with powerful missile and artillery weapons for various purposes. Of particular interest is the new anti-aircraft system installed on the new frigate. To protect the ship from missiles and aviation enemy in the near zone frigates of project 22350 should receive a new anti-aircraft missile and artillery complex (ZRAK) 3M89 Broadsword. 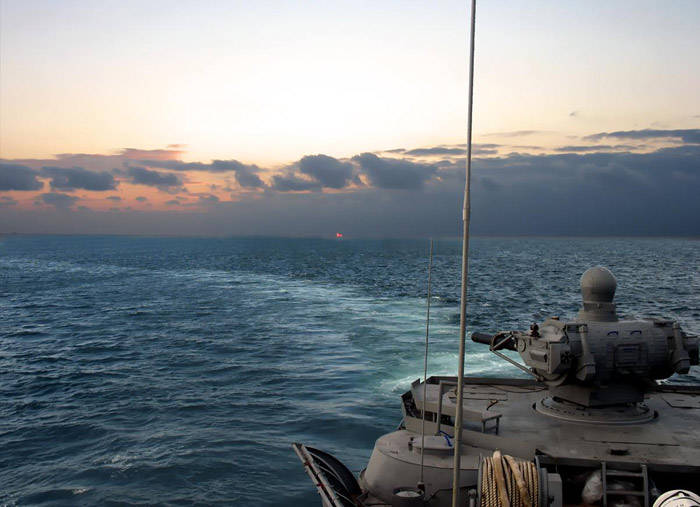 Despite the fact that the CEL 3M89 "Palash" was created in the early nineties, to date it has not received much distribution. According to reports, the Russian Navy has only a few complexes of this model. In particular, one of them is mounted on the Black Sea Fleet’s R-60 rocket boat. The construction of new frigates of the 22350 project will significantly increase the number of used anti-aircraft systems of the new model.

The first mentions of the new anti-aircraft missile and artillery complex, developed in the Design Bureau of Precision Engineering. A.E. Nudelman, appeared in the mid-nineties. The Palace "Palash" was developed as a less complex alternative to the complex "Kortik" that existed at that time in the Tula Instrument Design Bureau.

In the first half of the last decade, an experienced 3P89 combat module was assembled, designated A-289. The module was tested at the test site, after which it was installed on the P-60 missile boat. CRAFT "Palash", installed on the boat, was tested to 2007 year. At the end of the same year, a new anti-aircraft system was put into trial operation, which it still has.

Anti-aircraft missile and artillery complex "Palash" is intended to create a continuous zone of air defense of a ship or boat at a distance of 10 kilometers. For the destruction of targets in the CIRC "Palash" there are two artillery guns and a set of guided missiles. This allows you to create a layered zone of destruction and thereby increase the likelihood of successful destruction of the target: an object that has broken through the zone of responsibility of the missiles will be destroyed by artillery. 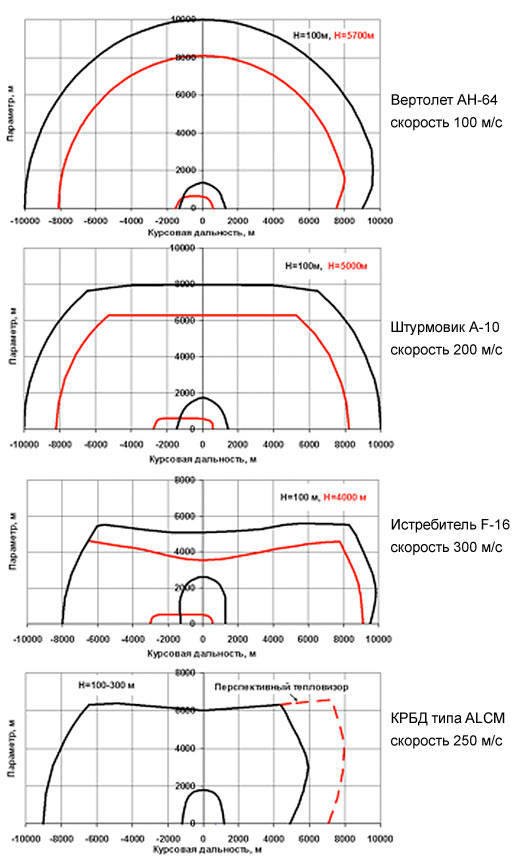 The defeat zones of the air defense missile system with Sosna-R missiles (from the KB Tochmash site, 2008)

The combat module 3Р89 SPARAH "Palash" combines several different systems, which allows you to install it on any suitable ship with a displacement of more than 500 tons. The combat module includes the main unit, which houses a part of the equipment. Guidance equipment is installed on the upper surface of the main unit. On the side surfaces - the mechanisms of fastening guns and missiles. 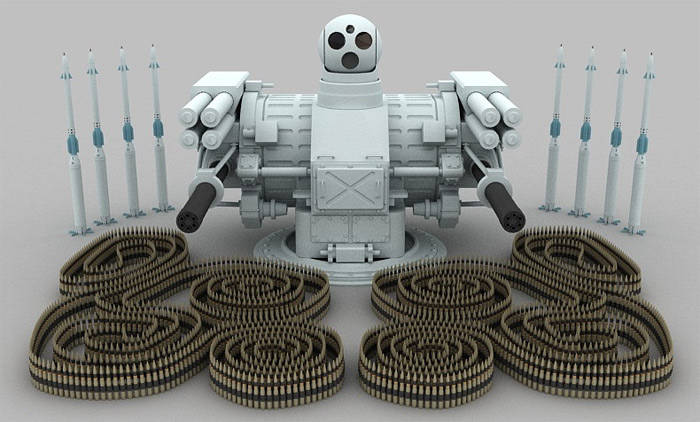 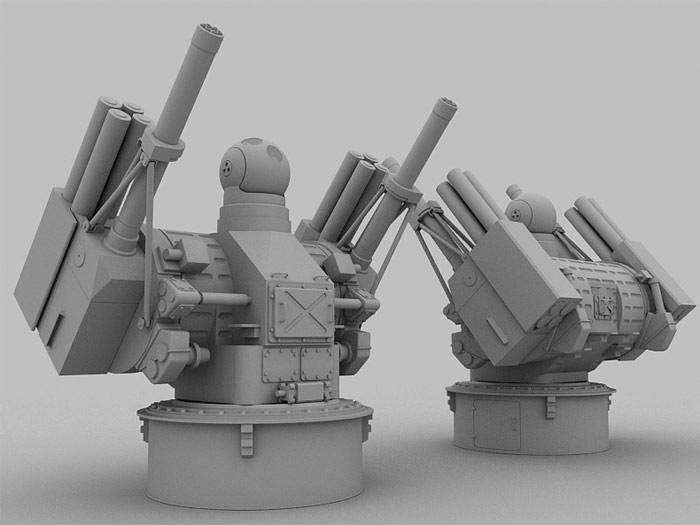 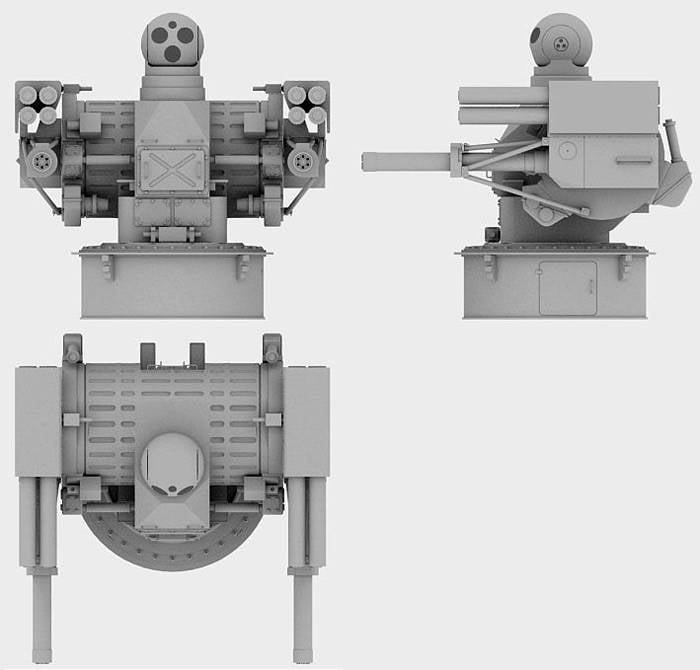 To destroy targets at ranges up to 4000 meters and at altitudes up to 3000 m, the Palash complex can use two AO-18KD anti-aircraft guns. 30 mm six-barreled guns have a rate of fire of up to 5 thousand shots per minute (total - 10 thousand shots per minute). According to reports, anti-aircraft guns MILK "Palash" use shells of two types. High-explosive shells have an initial speed of up to 940 m / s and are capable of destroying targets with an explosion and shrapnel. Armor piercing shells leave the barrel at speeds up to 1100 m / s. The artillery part of the anti-aircraft complex is equipped with an auger-free auger feed system. In the stores of the combat module is placed up to 1500 shells.

Destruction of targets outside the firing range of the guns is proposed to be carried out with the help of 9М337 “Sosna-R” missiles. Up to eight transport-launch containers with these ammunition can be installed on the combat module SPARK “Palash”. The guided missile with a launch weight of about 30 kg is made according to a two-stage scheme. When exiting the transport and launch container, the rocket uses a first-stage accelerated discharged engine; after separation, the flight is carried out using the power unit of the sustainer stage. The maximum speed of the rocket 9М337 is declared at the level of 875 m / s. The maximum range of destruction - 10 km, the maximum height - 5 km.

The Sosna-R anti-aircraft missile has an original control system. At the initial part of the flight, the missile is aimed at the target by the commands of the anti-aircraft complex coming in via a radio channel. After the missile reaches the line of sight, control is exercised using a secure laser command system. Such a control system and the high maneuverability of the rocket, it is claimed, significantly increases its combat capabilities. The rocket carries a rod warhead weighing about 5 kg.

For search and tracking of targets ZRAK 3М89 "Palash" can use external guidance from shipborne radar systems. In addition, there is its own optical-electronic control station "Ball", located on the upper surface of the combat module. Television and thermal imaging equipment, a laser range finder, as well as an antenna and a missile guidance laser are located under the characteristic spherical jacket. 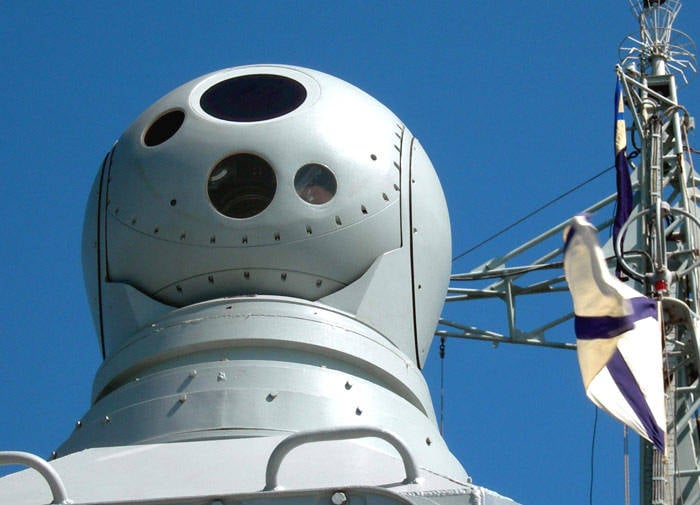 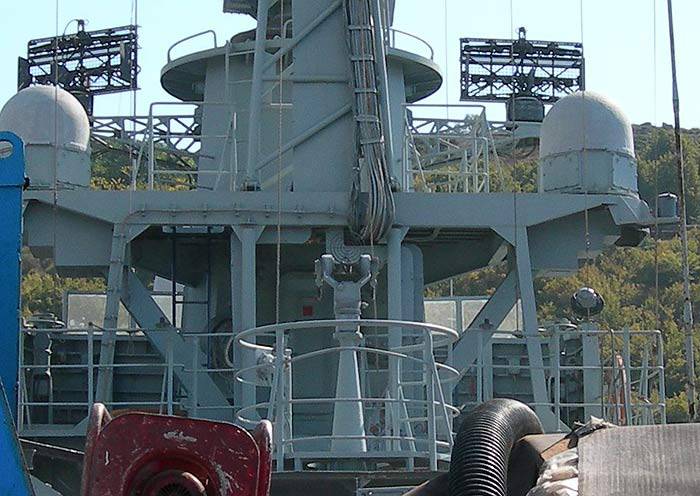 The antennas of the inquirers of the state-own-alien (lattice) state recognition system and the optical sighting column on the P-60 rocket boat before installing the Palash combat module, SRZ No. XXUMX, Sevastopol, autumn 13 (photo from the archive Warman, http: / /militaryrussia.ru/forum)

The capabilities of the Shar station make it possible to take an “airplane” type target for automatic tracking at distances up to 30 km (depending on the characteristics of the target). For cruise missiles, the maximum capture range is 10-12 kilometers.

Optic-electronic control station "Ball" is associated with a digital computer and other components of the complex. All information about the operation of the systems is displayed on the monitor of the control panel. Depending on the surroundings, the PALACE Palau can operate in fully automatic or semi-automatic mode. In the latter case, part of the control operations is carried out by the operator of the complex using automation. 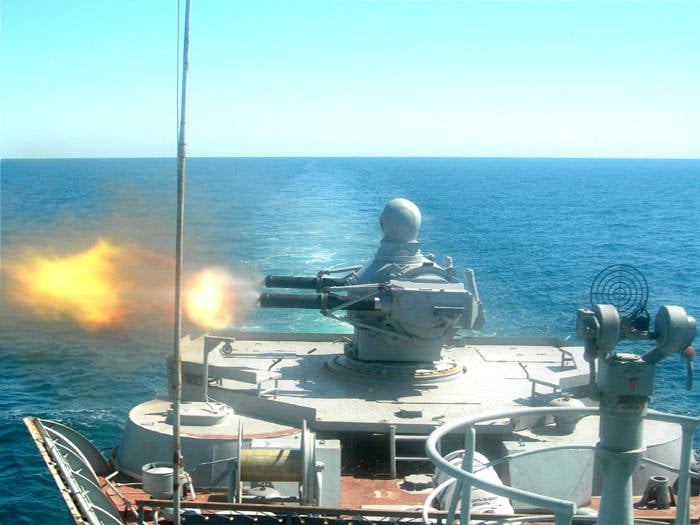 Missile control systems are protected from interference. The command equipment produces a relatively narrow control beam, which makes it much more difficult to suppress. In addition, the use of a laser control system in the final flight segment almost completely eliminates any jamming of the control signal.

Anti-aircraft missile and artillery complex 3М89 "Palash" is able to carry out the airborne defense of the base ship. Thus, at distances from 1,3 to 10 kilometers, the destruction of the target is carried out with the help of Sosna-R missiles. Aimed fire from automatic cannons can be conducted at a distance from 200 to 4000 meters. 9М337 missiles are capable of destroying targets flying at speeds up to 700 m / s. The maximum speed of the target, which can hit the guns - 300 m / s. The reaction time of the complex does not exceed 5-7 seconds.

CRAFT "Palash" is intended for use on ships of the Russian Navy. For deliveries to foreign customers, a version of the complex called Palma 3М89Е has been developed. According to reports, foreign buyers are given a choice of several options for the Palma system. Depending on their needs, the customer can purchase a fully-equipped anti-aircraft complex, a combat module without surveillance systems, as well as a module with only missile or artillery weapons.

In 2011, two patrol ships of the Russian-made 11661 project “Cheetah-3,9” were accepted into the naval forces of Vietnam. At the request of the customer, these ships received one "Palma" combat module with rocket and artillery weapons. Last year, construction began on two new ships of the same type for the Navy of Vietnam. They should receive the same weapons as the first two patrols.

It is also known that one combat module "Palash" was installed on the Dagestan patrol of the 11661 project. Thus, in the domestic navy at the moment there are only two copies of the Scope “Palash”: on the rocket boat P-60 (experienced combat module) and on the patrol ship “Dagestan”.

Currently, the Palash anti-aircraft missile and artillery complex is the newest system of its class, adopted by the Russian Navy and installed on ships. In the future, it could be replaced by the shipboard Pantsir-M, which was based on the land complex Pantsir-С1. In the meantime, the construction of the 22350 frigates, which are equipped with the X-gun system 3М89 "Palash", continues.