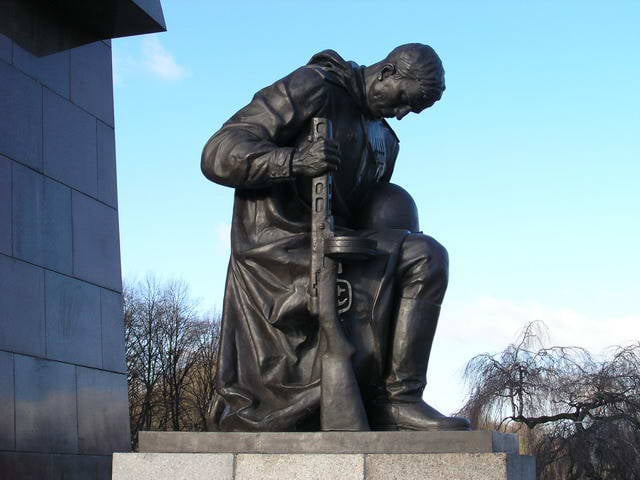 During the Great Patriotic War, the Soviet people made the greatest feat, having managed to break the backbone of the fascist beast.

Nevertheless, along with the established views on the world-historical significance of the Victory over fascism, opposite judgments also make themselves felt. After more than six and a half decades, a number of Western states have "their own exceptional views" of victory.

In victorious May 1945, no one could even think that a few decades later, they would have to fight again against falsification stories. In the world, attempts have been stepped up to finally rewrite the history of the Second World War.

On the pages of some newspapers and magazines, as well as on television and radio, the performances of the quickly reconstructed history “experts” who believe that Germany might not have attacked the USSR if it were not for Stalin’s racial politics are not rare. But Hitler, still in 1924, in his well-known book "Mein Kampf" wrote: "The goal of our entire foreign policy must be the acquisition of new lands ... which we could settle with the Germans ... We must stop the eternal German desire to go south and to the west of Europe, and definitely point the finger towards the territories located in the east. "

Voices are heard not only about the "guilt" of the Soviet Union in initiating war, but also about the senselessness of resistance to the fascist invasion, as well as about the erroneous position of Western countries that have taken the side of the USSR. According to supporters of this concept, resistance to fascism and victory over it would have a regressive value. Therefore, Vlasovites, Bendera, deserters who fled from the front, and other traitors turned out to be supposedly farsighted and progressive people, and all the front-line soldiers and the Soviet people as a whole were an unconscious, inferior mass.

The main direction of falsification of historical truth is the devaluation of the contribution of the Soviet people to the Victory over fascism, the underestimation of the feat of the people of the USSR, including the Belarusian people.

The truth is that it was the Soviet people and their Armed Forces who barred the road of the fascist aggressors to world domination. The main battles of the Second World War and the outcome of the war as a whole took place on the Soviet-German front.

The Soviet Armed Forces destroyed the 507 of the fascist German divisions and the 100 divisions of its allies.

It was on the Soviet-German front that the German armed forces lost almost 10 million killed and captured. Over 70 thousand aircraft, about 50 thousand were destroyed. tanks and assault guns, 167 artillery guns.

The historical truth is that our allies opened a second front only in 1944, despite the commitment to open it in 1942.

At the end of June, the 1944 of the year against the Red Army acted more than the 180 German and 58 divisions of the German allies, while the American and British forces were opposed by the 81 German division.

One more direction of falsification of war is directly connected with the losses of the USSR. There are no words, the loss of this war is immensely heavy, but still they are not the same as depicted by false historians.

The war claimed over 20 millions of lives of Soviet people. Soviet military losses (dead, dead from wounds, missing, not returning from captivity) amounted to 8 million 600 thousand people, and the fascist army and allies of Germany - about 7 million 200 thousand people. The rest of our victims belong to the civilian population who suffered from the Nazi victims, diseases, hunger.

Of all the countries that fought, our country suffered the greatest damage: 2 million 200 thousand people died. Loss and sacrifice are immensely heavy, of which we all mourn.

In German captivity there were 4,5 million of our military, and only about 2 million returned after the war. Where did the rest go?

If the Red Army, arriving on German soil, acted in relation to the German population and prisoners of war in the same way as the Nazis to the Soviet people, the ratio of losses would have been different, but this did not happen.

Obviously, if Hitler had won the Second World War, mankind would have been thrown back decades. It is known that the goal of fascist Germany was to seize and destroy the Soviet Union as a state, enslaving and exterminating the Slavic and other peoples constituting the “inferior race”.

In response, the Soviet government, despite all its flaws, achieved the active participation of all the people in the Great Patriotic War, which was the decisive condition for victory. And the main thing that inspired and united the majority of Soviet people was the idea of ​​defending the Motherland, saving the Fatherland, and with it the whole of Europe from the threat of fascist enslavement.

It can be definitely argued that the strict centralization of political, state and military power, strict exactingness and responsibility at all levels established in our country during the war had both positive and negative sides. There was also violence, sometimes unjustified, even from the point of view of wartime, especially by the NKVD. But we can not agree with the fact that everything allegedly rested on violence. This is not only unfair and insulting to the participants of the Great Patriotic War, but also not true. For example, me, as well as other participants of the war, no one drove into the attack and did not hold under the fear of being shot on the front line. We went into battle with the words: "For the Motherland, for Stalin!"

To achieve victory, a strong economy, skillful political and strategic leadership and a high level of military art are required.

Those who want to honestly and impartially understand our past should be guided by love for the Motherland, be a citizen of their Fatherland, and also remember the words of Marshal of the Soviet Union Georgy Zhukov: "I can only write the truth."

The policy of modern states should be aimed at never repeating the tragic events that claimed tens of millions of human lives, which led to the destruction of hundreds of thousands of cities and towns.