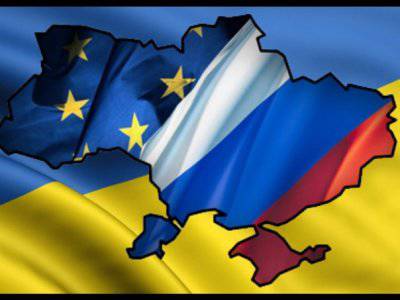 I enjoy reading. I read at home, in public transport, in nature, at work (instead of a smoke break), during meals and before bedtime, and even before going to the toilet for a long time I choose what to read.


I read smart books and not very, history, fiction, journalism, memoirs of historical figures and bedtime stories for a child.

But over the past three months I have not read a single book - whenever I can, I eagerly absorb information from Ukraine, from various sources, where there are opposing opinions. Hopefully, I will wait for the memoirs of the Berkutovtsy and the publication of the interrogations of Bandera.

It will be later, and now even people far from politics are watching and discussing events on the southwestern edge of the Russian world (even my wife today asked whether Ukraine and Crimea are one or the same, asking for comment on the referendum. And I thought that there are still people in the country who are never interested in politics for anything).

I discussed the latest events on the net, with friends and colleagues, and with my father. So, sitting on the Internet, reading tons of analytics, interviews, looking at the Maidan from all possible TV-spots, again I have to admit that chicken does not teach chicken.

The father's argument was straight and peremptory, like himself: in Ukraine there was a church schism, its inhabitants allowed sedition and terrible betrayal, and now let them slurp famously with full spoons until they realize and repent. I fully subscribe to this statement.

In Ukraine, there was already one church split, when a number of traitors and renegades under the strongest pressure of Catholic Poland passed into submission to Rome. The Brest Union was signed in 1596 year, after which the blood in the Ukrainian territory flowed like a river, the apotheosis of which was the ruin of 1657-1687, which claimed many, many lives. Cause and effect ... As in the big Russia, the anti-Christian events of 1917 were 1930-s and the civil war with the Great Patriotic War.

The Crimea is absolutely not Ukrainian, it is Russian and Orthodox (we leave the local Tatars behind the brackets - they have their own truth and their own will, which we will have to reckon with in any case). The split did not hurt the peninsula, and there everything comes back to normal.

Lugansk, Donetsk, Kharkiv plague touched the corner - there, too, everything will be fine. As the saying goes, "polite will come - will bring order." This is on 100% Russian lands, which, like the Crimea, for reasons that are not fully understood, have legally ceased to be Russia.

In the central Ukrainian regions, “mutants” are much more, and those who did not fall under alien influence will suffer during the treatment. It's a pity. But on the other hand, once the cause is allowed, then there will be a consequence.

Kiev ... I have such pleasant and romantic memories of visiting the ancient capital. Light, Light, where are you now, how are you? Kindness, politeness, desire to help and prompt. It seemed that these qualities are inherent in all Kievans. And then-Maidan on his head. Not otherwise, the goat marsh kikimory were very strong witches.

Kiev lost its Russianness. I’m not even talking about signs on the shops and not about moving on the streets, I’m talking about one necessary sign of a Russian person, about whom Dostoevsky spoke. According to this criterion, there are few Russians left, or evil people, as always, are simply better organized. It's a pity.

Western Ukraine ... Centuries of Russophobia and direct repression on the side of our western enemies have done their job. The terrible genocide of the Russians by the Austrians with their Ukrainian assistants during the First World War became the culmination of the extrusion of Russia from the Carpathians.

In fact, the inhabitants of western Ukraine (except Transcarpathia, they somehow managed to survive the Rusins) are descendants of traitors, descendants of those who chose to betray, many of whom were accomplices in the massacres who did not change their faith, their self-name and the Russian language (maybe Tolkien described the emergence of orcs from the former Russian Carpathians?). Terezin and Talerhof - this is where the history of Russians in Galicia stopped.

Soon zapadentsy will be completely alone. They will not be fed by either the Donbass miner, the Odessa seaman, or the farmer on the Black Sea coast, and even free buns will not be distributed to them anymore. Tyagnibok and Yarosh, like their predecessors Bandera and Shukhevych, will fiercely and bloodthirsty find out who loves Ukraine more and who hates Mosklyak and Jews. Not sorry. Totally. It would be good if all Ukrainian adversities concentrated on these lands. But nothing depends on me, but terms such as the California Sea, Florida Glacier, and the Confederation of American Indian Tribes of America have long appeared. It's a pity.

Further - not about that piece of land, which is not Ukraine, but Little Russia. Let's talk about Russia as a whole.

We constantly, for centuries, balance between greatness and doom. Many say that the existence of our country is a miracle. Luck. Happening.

Is it easy for “mice”, such as Andorra, San Marino and Liechtenstein, to survive on the field of history? They really can rely on chance. Or columns tanks they will pass by, or Vesuvius will not throw out lava there, or the neighbors will forget to annex ... Russia in this regard is not even a bear, but a hefty mammoth, who, despite the packs of evil jackals around, is not going to die out. Remember the animated series "Ice Age" and his mammoth character, and calculate the probability of his survival in all sorts of vicissitudes. It turns out somewhere very close to zero. So: the likelihood of Russia being preserved as a large mammoth, and not a pack of baby rats biting among themselves, is even less. How did we survive and still survive all the burns and hardships, while becoming only stronger and stronger? There is only one answer: with God's help. Where does it come from so much, why is its "concentration" on 1/6 land so incredibly high?

Vera. Our Orthodox faith is the source of miraculous victories and the salvation of Russia. The stronger the faith, the more we give birth to future warriors, blacksmiths and plowmen, the more united, kinder and more conscientious we will be, causing impotent anger from enemies and respect from neighbors. The stronger the faith, the greater the chances that, it would seem, of the most hopeless situations, Russia will overcome all hostile intrigues. Thinking for national security, people who regularly attend church do nothing less than our armed forces.

In the event of an enemy attacking our country, the best often die - those who decided to weapons in the hands and faith in the heart to resist the enemy, or martyrs who courageously take a cruel death for abandoning the most terrible betrayal. The souls of both those and others fall straight to the heavenly throne, and upon the occurrence of the next misfortune they can turn to the highest authority. Their requests have not remained unanswered to this day.

They will be heard in the future, if there is faith in our souls. If to be a cynic, then we can say about a certain resource of Russia, accumulating in the time of misfortunes to prevent the terrible and irreparable - the disappearance of our country.

Then the great invaders make absurd mistakes, their army at the most inopportune moment will become infected with dysentery and pacifism, frosts and mudslides will come just when they disturb the enemy, and most importantly, the great leaders and rulers will show themselves.

Our “partners” (enemies) understood something, therefore they throw up all kinds of heresies, communism and liberalism, all kinds of euro values ​​there. They try to distort, snatch and trample our faith, replacing it with some kind of alien surrogate. If they succeed, Russia will not. There will be no one to ask the martyrs, because we will remain in the power of the one who comes up with all these "European things." And he is clearly the oppositionist Heaven!

Everything will be fine with us. The main thing is to believe. To love and hope, but also (I almost forgot) and not to do it myself.

Ctrl Enter
Noticed oshЫbku Highlight text and press. Ctrl + Enter
We are
A great interview with Sergey Lavrov: about Ukraine, Obama and IranWhat you didn't want to know about England
Military Reviewin Yandex News
Military Reviewin Google News
63 comments
Information
Dear reader, to leave comments on the publication, you must sign in.