March 21 2014
35
Admiral V. Chirkov spoke about the further development of the national underwater fleet. The admiral told about the current submarine construction programs, and also touched on the creation of promising equipment for the navy. 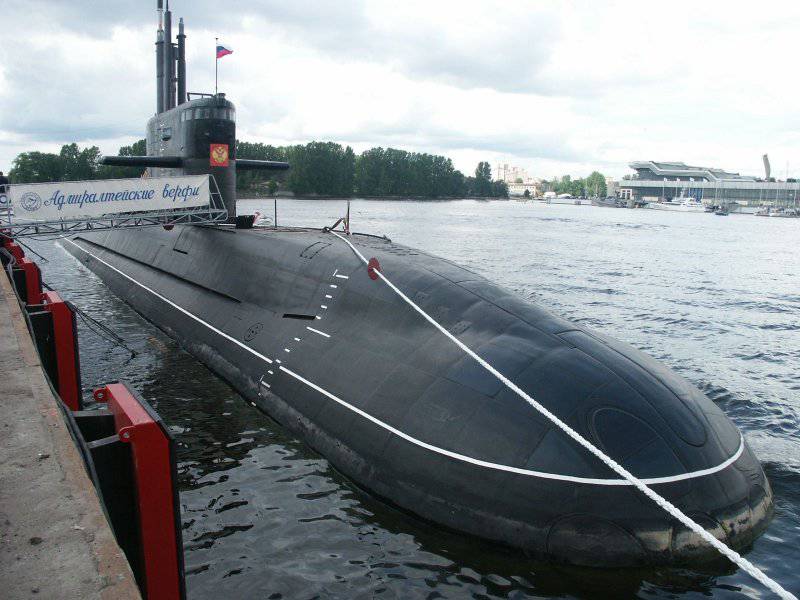 According to V. Chirkov, the domestic defense industry is currently working to create an air-independent power plant (VNEU) for promising non-nuclear submarines. Businesses in the project promise to complete their part of the work in 2015-16. Thus, over the next few years, the first submarine with a VNEU will appear in the Russian Navy. When the new power plant is ready, it will be installed on a new diesel-electric submarine, which is planned to be built in accordance with the updated 677 "Lada" project. Construction of this submarine is scheduled for completion in 2016-17.

Simultaneously with the development of an air-independent power plant, the creation of a new project of non-nuclear submarines is underway. In the future, it is these submarines that should become the carrier of a promising VNEU. According to Admiral Chirkov, the new project received the designation "Kalina". Prior to the construction of the Kalina submarines, it is planned to test an experimental VNEU, for which a submarine of the previous 677 Lada project will be used. After refinement, the promising system will be suitable for installation on new non-nuclear submarines.

The appearance of an air-independent power plant will allow promising non-nuclear submarines to outperform existing diesel-electric submarines in their characteristics. As is clear from the name of a promising power installation, the submarine equipped with it does not need regular ascent to use atmospheric air and recharge the batteries. Thanks to this, a submarine with a VNEU can be under water for a longer time. According to reports, the domestic VNEU that uses hydrogen, will receive it through the processing of diesel fuel.

Submarines "Kalina" and an air-independent power plant for them are still at the design stage. At the same time, the domestic defense industry is working in another program related to the submarine fleet. Commander of the Navy V. Chirkov recalled the construction of new diesel-electric submarines of the 636.3 Varshavyanka project. Over the next few years, the Black Sea Fleet will receive six such ships.

Six new submarines will make it possible to create a full-fledged compound of constant readiness in the Black Sea Fleet. Using new submarines, Black Sea sailors will be able to solve a wide range of tasks in their area of ​​responsibility. Submarines "Varshavyanka" will be able to operate in conjunction with surface ships or sea aviationthanks to which the Black Sea Fleet will increase its capabilities in operations in the Mediterranean Sea.

According to Admiral Chirkov, the renewal of the Black Sea Fleet is long overdue, and now this unit of the Russian Navy will be able to work effectively and ensure national security in its entire area of ​​responsibility - from the Black Sea to the Mediterranean.

Speaking about the prospects of the domestic submarine fleet, Admiral Chirkov touched on the topic of the strategy for its use. In addition to the naval component of the nuclear triad, the navy intends to use the so-called. strategic non-nuclear deterrence. The group, which will receive similar tasks, should include both nuclear and diesel-electric submarines with high-precision rocket armament. In addition, surface ships will also perform non-nuclear deterrence tasks.

Among others, the group of strategic non-nuclear deterrence should include new multi-purpose nuclear submarines of the 885 Ash project. The lead ship of the Severodvinsk project several months ago was put into trial operation and in the near future should become a full-fledged combat unit of the Navy. Until the end of this decade, a total of eight submarines "Ash" will be built. The armament of these submarines will allow you to attack targets at distances up to 500 kilometers, which accordingly affects their combat potential.

In addition, for strategic non-nuclear deterrence will be used boats project 636.3 "Varshavyanka" and the projected "Kalina". Thus, over the next few years, the navy of Russia should receive new tools to perform various strategic tasks.

The commander-in-chief of the Navy spoke about methods of preserving the existing potential of submarine forces. There is a program for upgrading third-generation multipurpose nuclear submarines, which is being implemented, and there are plans to build new submarines of various classes and types. One of the main methods of increasing the potential of submarines, according to Admiral Chirkov, is the upgrade of their avionics with the integration of advanced robotic systems.

Finally, the commander of the navy noted the importance of the submarine fleet for the country's security. In his opinion, an increase in the intensity of the service of submarines should have a direct effect on the security of Russia.

Ctrl Enter
Noticed oshЫbku Highlight text and press. Ctrl + Enter
We are
The program of shipbuilding of the Navy of the Russian Federation or a Very Bad PremonitionThe submarine "Kronstadt" will be completed
Military Reviewin Yandex News
Military Reviewin Google News
35 comments
Information
Dear reader, to leave comments on the publication, you must sign in.