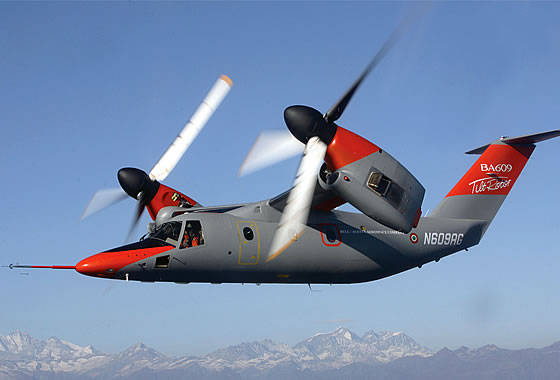 Agusta / Westland has completed the development of the AW-609 convertoplane. The total flight time of two test samples of the apparatus was about 1000 hours.


According to Finmekkanik, the program is currently moving into the certification phase of the Federal Civil Administration aviation, which is expected to be completed in 2017.

Agusta / Westland also collaborates with the International Civil Aviation Organization (ICAO) to resolve all formalities before the AW-609 convertoplane is offered in the commercial market.

Currently, Agusta / Westland is building a third AW-609 prototype at the Verdzhat plant, which will join the flight test program in the 2014 year. The fourth prototype will be included in the certification program later, which will allow you to try out a new set of avionics in flight.

Rockwell Collins will supply a fully integrated cockpit for the AW-609, including 14-inch touchscreen displays, integrated flight control systems, satellite navigation systems, collimator indicators, etc. The kit will provide the crew with increased situational awareness and reduce the workload of the pilot.

At the 2014 Heli-Expo 25 in February, the X-tail AW-609 performed a demo flight in the presence of potential customers.

The avionics and AW-609 controls resemble the equipment of an ordinary helicopter and therefore the retraining of pilots will not cause difficulties. AW-609 focuses primarily on the civilian market and, according to plans, will be used to perform a wide range of tasks, including law enforcement, transport of goods and passengers, border control, drug trafficking and illegal migration, and search and rescue operations, and also the evacuation of distress.

It is assumed that the machine will be in demand, first of all, for servicing offshore oil and gas fields. Compared to helicopters, the AW-609 tiltrotor provides greater flight range, speed and comfort in “airplane” mode. At the same time, like the helicopter, the device can land vertically on small platforms.

According to “Finmeccanic”, in the “asset” of the AW-609 convertoplan there is a flight for the distance of 320 nautical miles (580 km) from Mesa (pieces of Arizona) to Long Beach airport (pieces of California) in 1 h 35 min. (with a headwind of 15-20 knots) at a cruising speed of 250 knots and an altitude of 20 thousand feet.