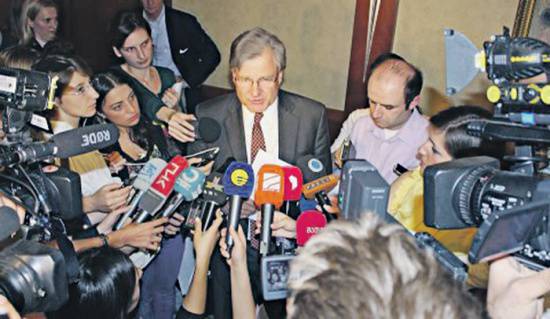 US Ambassador Richard Norland assured: the West will not leave Georgia. Photos from the official website of the US Embassy in Georgia

A petition to the leadership of NATO is being worked out at the highest levels of the Georgian government so that it accelerates the country's admission to the alliance as much as possible. The Georgian leadership, preoccupied with the Crimean scenario, is trying to minimize the risks. Tbilisi can count on the traditional support of the United States, Poland and the Baltic countries. However, there are still no signs that Germany and France can change the position - perhaps the main opponents of Georgia’s admission to NATO at this stage.

In reality, what Georgia can count on at the summit of the heads of states of the North Atlantic Alliance, which will be held in early September in Wales, is the receipt of the NATO Membership Action Plan (MAP). This is the final stage, which precedes the entry of a candidate country into the coalition. But Tbilisi, extremely concerned about the events in Ukraine, will try to convince Western partners of the need to join NATO now.

State Minister for European and Euro-Atlantic Integration Aleksi Petriashvili believes that the leadership of the bloc, realizing the increased level of threats, should meet Georgia.

With such hopes, however, the assessment of the situation by the US ambassador to Georgia Richard Norland is somewhat discordant. “I know that Georgia is afraid of repetition stories. It is important to work together to avoid this ... The international community is working together on this topic. And Georgia is part of the international community, and we have common goals, ”he said at a meeting with Georgian journalists.

Not receiving firm guarantees from the West these days to provide protection in the event of forceful actions on the part of Russia, the pro-Western part of the Georgian public has become agitated in earnest. Former Foreign Minister Grigol Vashadze was marked on his Facebook page with a sarcastic statement: “Condolences to the West in connection with the demise of international law. We will miss him very much! It was weak ... very often he had no answers to the questions, but still it was necessary and by its existence brought peace to this crazy world. ” Along the way, Vashadze “congratulated” the current Georgian authorities on “the new foreign policy doctrine of Russia, which is called“ on the limited sovereignty of the post-Soviet countries, ”and recommended“ wait for quick instructions from Mr. Karasin (Deputy Foreign Minister of the Russian Federation, in particular, to improve relations with Georgia - “NG”) ”.

Another recommendation of the former Foreign Minister of Georgia to the authorities sounds absolutely serious: we must do everything possible to immediately join NATO, and not be happy about the possibility of obtaining a MAP.

More radically sound expert opinions and comments of prominent members of the public, published on the same Facebook. They are dominated by the requirement for the authorities to dot the i's in relations with NATO: the question of what else Russia can do with Georgia, recognizing the sovereignties of Abkhazia and South Ossetia, lost its meaning after the events in Ukraine — Russia, whose army is in several dozens of kilometers from Tbilisi, will do whatever it wants. If, under the current real threat, Western partners are not going to take Georgia under protection, take it into NATO, then let them stop fooling with endless promises - Georgia will have to find a way out on its own, but the Georgian guys will stop dying for Western ideals in Afghanistan. This perception of reality seems to be beginning to prevail in Georgian society.

An expert on military issues Vakhtang Maisaya confirmed the pattern of such disappointment of society by the West. “The MAP that Georgia can receive at the summit of NATO Heads of State in Wales, although it is the final stage of joining the alliance, does not indicate the very date of entry. The implementation of the plan can be delayed for years - the graduate country should harmonize its legislation with the laws of NATO members, align the political line, military policy and military construction, the economic level, as well as the level of information security, ”said NG Maisaya. But the solution to this five-level task, according to the expert, does not guarantee prompt admission to NATO, since "there are other aspects." He did not specify which ones, but probably they should be understood as the claims of Georgia for the restoration of territorial integrity.