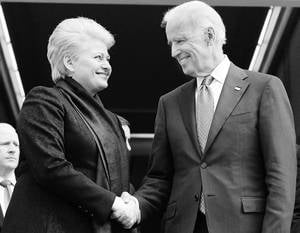 US Vice President Joseph Biden said Wednesday in Vilnius that the Pentagon will increase its presence in the Baltic countries. In response, Lithuanian President Dalia Grybauskaite thanked Washington for the prompt response to the Crimean crisis. Meanwhile, in Lithuanian society, the arrival of Biden caused a widespread campaign to combat the growing “Russian threat,” which reached psychosis.


“What a joy! Barin arrived with! ”It was with these (and similar) words that users of Runet in Lithuania responded to the message about the arrival in Lithuania of the American Vice-President Joe Biden.

Biden's plane landed at Vilnius Airport on Tuesday, at 20.07. The high-ranking guest was met by the Minister of Foreign Affairs of Lithuania Linas Linkyavichus and the US Ambassador to Lithuania Deborah-Anne McCarthy. On Wednesday, Joe Biden met with President Dalia Grybauskaite, as well as with her Latvian counterpart Andris Berzins.

Recall the day before, after the signing of an agreement in Moscow on the entry of the Crimea and Sevastopol into the Russian Federation, Biden said that an additional series of sanctions would be introduced against Russia. He also confirmed that, by the year of 2018, elements of the American missile defense would be deployed in neighboring Poland.

After meeting with the presidents on behalf of the Lord God, he blessed the people and army of Lithuania, announced plans to send American soldiers to the Baltic States to participate in land and sea exercises and assured that NATO was ready to ensure the safety of its members.

“We will also take additional steps to increase our military cooperation, including a larger US contingent on a rotational basis (in the Baltic States), and military exercises,” said Biden.

“According to the NATO Charter’s 5 article, we will respond to any aggression against a NATO ally,” said Biden, who said Washington’s “very, very serious” attitude to its allied obligations. He also said that “Ukraine showed courage by fulfilling the desire of people for a better life and integration into Europe” - however, “Russia chose a brutal military response and held a referendum, the results of which are not recognized anywhere”.

The vice president of the United States made it clear that Moscow could be politically and economically isolated due to the events in Crimea. According to Biden, “as long as Russia follows this dark path, it will bring about political and economic isolation.”

Biden recalled that this year marks the 10 anniversary of the Baltic countries membership in NATO. According to him, no one understands the importance of freedom better than the Baltic countries that "the USSR occupied 50 years." Therefore, to further demonstrate solidarity with the Balts, who are very worried about the “Russian threat”, the United States has already sent six additional F-16 fighters to strengthen the NATO air police mission in the Baltic sky.

In turn, Grybauskaite thanked the United States for the operational response, stating that the situation in Ukraine "is estimated as a serious threat to the security of the Baltic States and all of Europe, because after the secession of Crimea from Ukraine in Europe for the first time since the Cold War, they redraw the borders in a cruel way."

In turn, a member of the international committee of the Federation Council, Igor Morozov, recalled that the NATO bloc had previously constantly misled Russian politicians, arguing that its military presence and deployment of a missile defense system in the Baltic countries would in no way concern Russia. “However, step by step, they were moving towards the Russian borders, and now it’s not at all surprising for us that NATO will be located in the Baltic countries, and after a while - in Ukraine,” said the senator to the VZGLYAD newspaper.

The senator recalled that President Vladimir Putin and Prime Minister Dmitry Medvedev have repeatedly stated that if NATO strengthens its presence in the Baltic States and also places missile defense systems nearby, Russia's steps will be adequate. “We have a worthy answer, there is a system ready to pay off the American missile defense system, we are determined,” he explained. In his historical of speech, according to Morozov, the president clearly gave the justification for the foreign policy position and proved that the era of the unipolar world is over.

“New centers of political decisions in the world order appear - these are Russia, China, India, and we are ready to solve the issues of ensuring peace in the post-Soviet space as part of our new integration associations,” the senator concluded.

A wave of Russophobia has come to sausages

It is noteworthy that literally on the eve of Biden’s visit to Vilnius, a petition appeared on the Internet “for many years suffering from Russian aggression and Putin’s dictatorship” Lithuanian citizens asking (addressed to US President Barack Obama) to place a nuclear weapon - to protect against Russia. She has already signed more than two hundred people.

Also on the eve, the Lithuanian Department of State Security (DSS) published a 20-page report on how intensively the Russian intelligence services act against a small and proud Lithuania. It’s not even interesting that the Lithuanian authorities decided not to send the second secretary of the Russian Embassy in Lithuania Valery Katul (who was named in the publication as an officer of the GRU General Staff’s residency); The main blow was inflicted on the Russian-language media outlets in Lithuania, which were called “under the direct influence and control of Russian leaders who shape the information policy, as well as financially dependent on Russian government agencies and foundations.”

Immediately after this, “hot on the heels” of the Seimas, conservative Kestutis Masiulis, asked the “native authorities” to “initiate the limitation or suspension of the Russian publications Lithuanian Courier, Obzor, Express Week and the First Baltic Channel”. “The State Security Department has information that Kremlin propaganda is spreading in these publications. So if we already know where the danger comes from, then we need to eliminate it. Either these publications should stop spreading the ideology of Vladimir Putin, or should be closed, ”said Masiulis. And according to the vice-mayor of Kaunas Stanislovas Bushkevicius, in general anyone who does not feel the threat coming from Russia is an idiot.

Further more. The Lithuanian Russian Drama Theater under the direction of Jonas Vaitkus canceled his tour at the Baltic House festival in St. Petersburg. The theater (more precisely, its main director) made this decision in response to the fact that the festival director Sergei Shub appears on the list of cultural figures who supported Russian politics in Ukraine. This demarche has already caused a proposal in the blogosphere, addressed to Vaitkus and the rusdrama actors - to go to one of the rally in support of Ukraine organized daily in Lithuania, and also to rename the rusdrama to the Lithuanian theater of Ukrainian drama and comedy.

The latest "nail" was the detection of vigilant Lithuanian patriots, bloggers on the shelves of supermarkets "ideologically harmful" dairy sausages. On the packaging they have - oh, horror! - Cyrillic indicated that these sausages are called “Russian Meat Standard”, and that their recipe was created according to GOST sample 1979 of the year!

Ctrl Enter
Noticed oshЫbku Highlight text and press. Ctrl + Enter
We are
On the Lithuanian portal, Dalia Grybauskaite was blacklisted by ex-KGB officersThe Latvian Parliament will consider the issue of recognizing Russian as the second official language
Military Reviewin Yandex News
Military Reviewin Google News
58 comments
Information
Dear reader, to leave comments on the publication, you must sign in.