The world after the "Crimea" 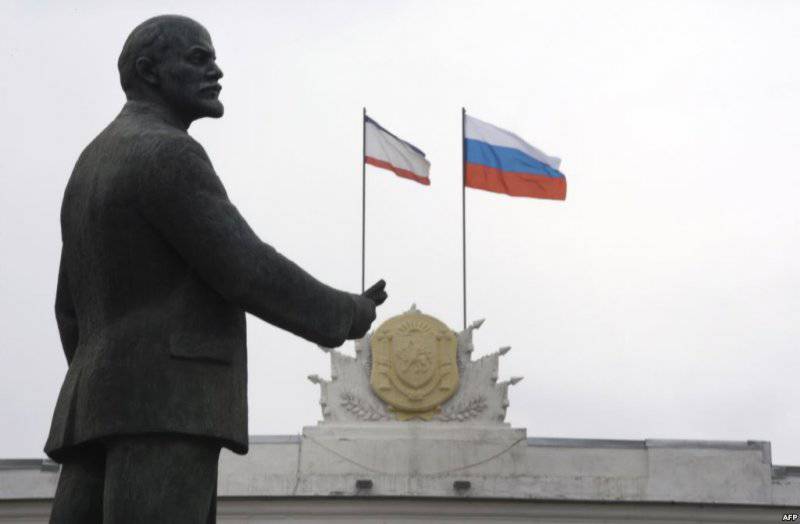 For us, this Western “non-recognition” is much more important than the fact that an atmosphere of happiness and joy reigns in Crimea, that Russia managed to save Crimeans from the pogrom of neo-Nazis of the Right Sector, that there will never be a NATO base in Crimea fleet!

Much more important today is that Russia did not recognize, and does not recognize, the pro-American Bandera government of Yatsenyuk. This Kiev map of Russia beats Western politics in Ukraine, the West will soon forget about the Crimea: without normal relations with Russia, the economy of Ukraine will begin to fall apart, fall into chaos of the “Makhnovshchina”. This means that the West will need to urgently take Ukraine for its full content, and clear up the brewed porridge of Euro-annexation (we turn to European terms) of Ukraine.

The West, especially the European Union, understands that the Ukrainian burden is unbearable for him, it will overstrain ... And what should he do now with the acquired Ukraine? If economic sanctions are imposed against Russia, then the European Union will begin to crack at the seams of the boomerang of its own sanctions ...

The only intelligible goal of Ukraine’s Euro-annexation is geopolitical, its inclusion in NATO loses its meaning without the strategic Black Sea aircraft carrier — Crimea. Why then the West contain all of Ukraine?

In Europe, there are political forces that understand the absurdity of the Ukrainian provocation of the West against Russia. Marine Le Pen, a representative of the French Euro-skeptics, gave this assessment of the situation in Ukraine: “The people of Crimea, who lived in fear ... rushed into the arms of Russia. The European Union either supports the Constitution of Ukraine, and then Yanukovych is still the president, and new elections are necessary. Either there is no Ukrainian Constitution anymore, and the current government is a revolutionary government, and then the Crimea can behave in the same way as part of Ukraine behaved on the Maidan. ”

Yes, a successful coup d'etat is a revolution. But in Kiev, the neo-Nazi, Bandera Maidan won, and according to the orange American scenario, under the leadership of the American embassy ... And the US has the audacity to demand that Russia recognize the Ukrainian Nazis! Indeed, Americans are stupid, says expert Mikhail Zadornov.

Russia will not join the Western policy of "appeasement" of the Nazi regime that arose in Kiev, we remember all too well what ended the policy of "appeasing" the Nazi regime by the West. For Russia, this Western combination is obvious in the setting of Bandera’s Ukraine against Russia. Therefore, the government Yatsenyuk doomed to economic disaster.

Exposing Bandera, Russia is pursuing a policy of denazifying Ukraine, no matter how painfully it hurts our pale-faced Western ... "colleagues." They are sick, the Russian Foreign Ministry concluded, “a pathological desire not to recognize reality.” This political schizophrenia, for purely selfish purposes ... is treated only by immersing the sick in reality, according to the method of Dr. Vladimir Putin.

What is it? Russia accepted the challenge that Washington had given her in the Ukraine, and responded with the “Crimea”, and it brought down the unipolar American world. The whole world realized that Russia had punished the United States for its policy of orange coup d'etat around the world.

Ctrl Enter
Noticed oshЫbku Highlight text and press. Ctrl + Enter
We are
Armored vehicles of Yugoslavia. Part of 6. Wars in the ruins. Bosnia and Herzegovina. Kosovo. MacedoniaSituational analysis of the death of the MH17 flight (Malaysian Boeing 777), made on the basis of engineering analysis from 15.08.2014
Military Reviewin Yandex News
Military Reviewin Google News
68 comments
Information
Dear reader, to leave comments on the publication, you must sign in.