March 20 2014
11
12 March NATO sent 2 aircraft to the borders of Ukraine with its DRLO and long-range radar detection and control aircraft, these were E-3A Sentry aircraft. E-3A ply in the airspace of Romania and Poland, mainly collecting information about the situation in the Crimea. In total, the North Atlantic Alliance has in Europe 18 aircraft type E-3A Sentry, which are based on the German airbase in Heilenkirchen under the registration of Luxembourg.

Most often DRLOU planes are designed to collect information on air targets, but can also be used to detect ground targets. Their main advantage is the high power of radar equipment installed on board. With it, such aircraft can receive operational information about all enemy aircraft, without entering the zone of action of its air defense systems. Modern AWACS aircraft can detect and track air targets at a distance of up to 650 km, while the number of such targets can reach hundreds of units. With the help of these planes, it is easy to establish coordination of the actions of the Air Force and provide its troops with operational information about the enemy. 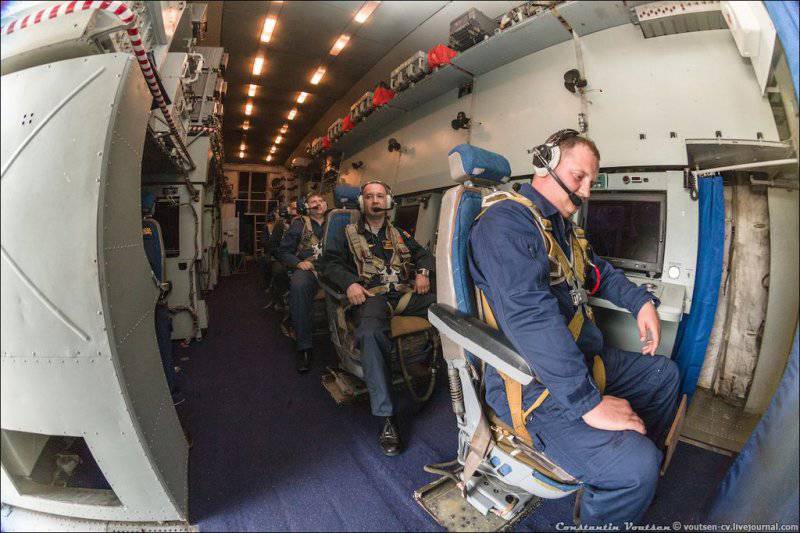 Today, only one DRLOI aircraft, located at an altitude of 9 thousand meters, is able to control an area of ​​up to 312 thousand sq. Km. For example, the 3 of the American E-3C aircraft is able to provide permanent radar control over the entire airspace over Central Europe, with the detection zones of these aircraft intersecting each other. The use of AWACS aircraft makes Allied fighters less visible to the enemy, since they almost do not need to include their own airborne radar.

At the same time, the very high efficiency of such aircraft makes them a priority target for enemy fighters. For this reason, such planes very rarely fly without fighter jets or outside the range of the allied air defense system. Such aircraft are very vulnerable to fighter aircraft, since they are made on the basis of bulky passenger liners and military transport aircraft that are not highly manoeuvrable and are unable to effectively avoid missiles. In addition, the AWACS plane is a powerful source of radio wave radiation, which is characterized by its enormous size, so that such planes can be easily detected by enemy air defense radars. Below are the 5 of the most massive AEW aircraft in the world at this time.

One of the oldest aircraft of this class in the world and one of the few machines that was originally developed as an AWACS plane. The aircraft was adopted by the US Navy in 1964 year. Currently, it is the most common type of "flying radar" in the world. Total order was released 200 aircraft of this type. The aircraft was exported to 7 countries of the world and managed to take part in a number of armed conflicts. Currently, the E-2C / D / K / T aircraft are in service with 5 countries - the USA, France, Egypt, Taiwan and Japan. As part of their Air Force and Navy 92 listed such aircraft.

The most common version in the world is E-2C. This aircraft is able to reach speeds of up to 598 km / h. With a wingspan of 24,6 m, length - 17,5 m and height - 5,6 m, its combat radius is 320 km. The aircraft can patrol the airspace for 4 hours. The crew of the aircraft consists of 5 man: 2 pilot and 3 operator DRLO. Its main weapons is a rotating antenna pulse-Doppler radar, which is installed in the fairing, located above the rear fuselage. Throughout the life of the aircraft is continuously upgraded, which allows it to remain in demand even after 50 years after adoption. 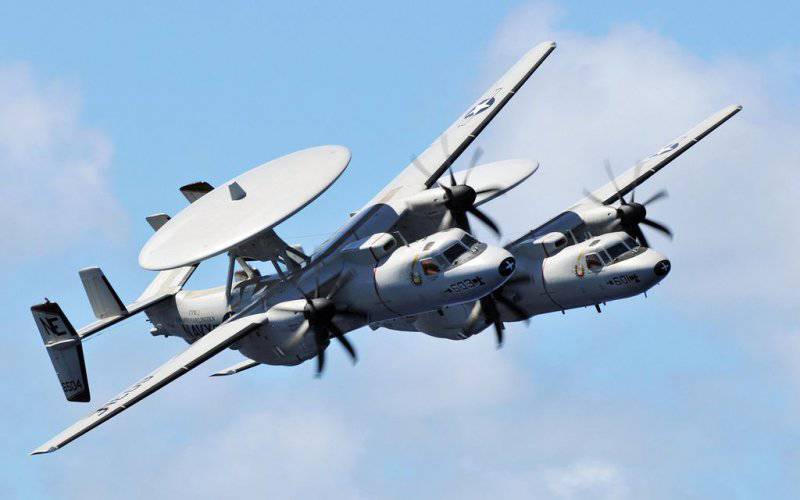 A passive detection system installed on the E-2C warns the crew about the exposure of an enemy radar at a distance of 2 times the radar range of the E-2C radar. The aircraft is able to detect airborne targets like "aircraft" at a distance of up to 540 km, and cruise missiles at a distance of up to 248 km. The first foreign customer aircraft became Israel. According to the Soviet military experts who took part in the fighting 1982 of the year on the side of Syria, it was the use of E-1978C airplanes purchased in 2 year that predetermined the success of the Israeli aviation in this conflict.

Currently, work is underway on an improved version of the aircraft E-2D. The US Navy expects to put this aircraft into service in the 2015 year, the Pentagon is counting on acquiring 75 such aircraft. All of them will receive a new APY-9 radar with an active phased antenna array, as well as a “glass” cabin, an integrated satellite communications system, etc. Currently, several aircraft have already been handed over to the military, they are undergoing a series of evaluation tests.

The E-3 Sentry is the face of flying radars. The plane, which is recognized in many countries of the world. Speaking of AWACS, this particular machine is most often represented. Boeing began work on this aircraft in the first half of the 1970s. The aircraft was designed on the basis of the existing Boeing 707-320 cargo aircraft. The E-3 made its first flight in 1976, and the following year the aircraft was adopted by the US Air Force. In terms of prevalence, the E-3 Sentry is second only to its predecessor, the E-2 Hawkeye. In total, from 1977 to 1992, 68 aircraft of these types were produced. Their main operators are the US Air Force (31 aircraft), NATO European Command (18 aircraft), Great Britain (7 aircraft), Saudi Arabia (5 aircraft), France (4 aircraft). As part of the Royal Air Force of Great Britain, the aircraft received a new designation - AEW.1. The Japanese E-767 AEW & C, which were developed on the basis of the B767 passenger airliner, but using Sentry radar equipment, can be attributed to the same type of aircraft. In total, the Japanese Self-Defense Forces are currently armed with 4 such aircraft. 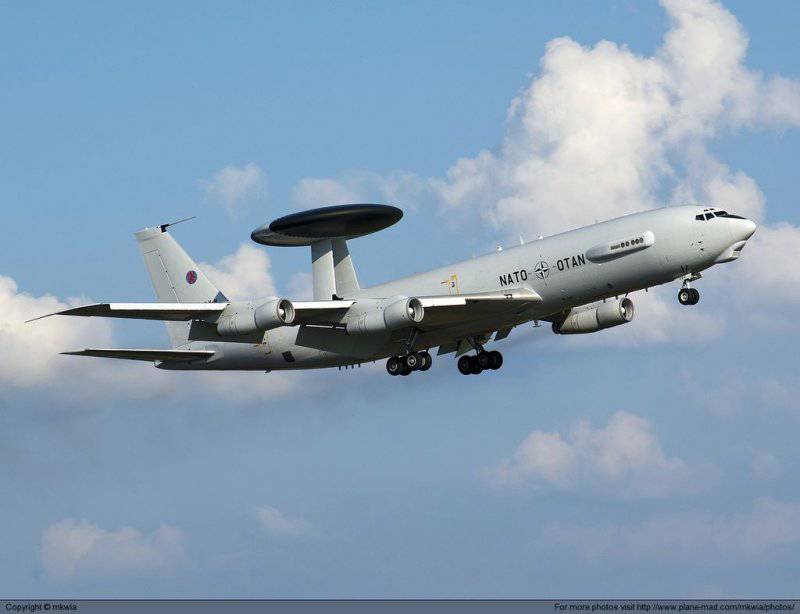 The E-3 Sentry is currently the only NATO Airborne Aeronautical aircraft. The basis of the AWACS complex is a very powerful all-round radar. The antenna is placed in the fairing located at the top of the fuselage on two supports at a height of 4,2 m above it. The diameter of the radome 9,1 m, thickness - 1,8 m. Thanks to this radar, the aircraft is able to detect targets above the horizon at a distance of 650 km, bomber-type targets at a distance of 520 km, small-sized low-flying targets at a distance of 400 km. The crew consists of 4 flight crewmen and 13-19 DRLO operators.

A-50 is the Soviet response to American AWACS. Aircraft DRLOIU A-50 was developed Taganrog Aviation Scientific-Technical Complex. Beriev. The development of the aircraft was in the middle of the 1970-s. The Russian “flying radar” is built on the basis of the common Il-76MD military transport aircraft. He first took to the air in 1978, in 1989, the aircraft entered service. A total of about 40 units were produced. Currently, the 29 A-50M / A-50U / A-50IE aircraft are in service with the Air Forces of Russia and India. The Russian Air Force has X-NUMX A-23M and 50 A-3U aircraft, and the X-NUMX A-50IE aircraft is serving in the Indian Air Force. The Indian version of the aircraft is based on the radar of the Israeli company Elta. 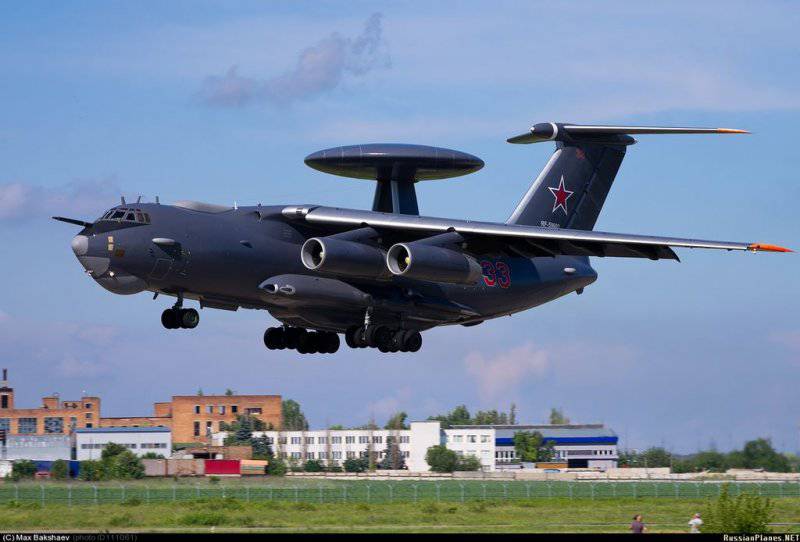 Currently, the A-50U aircraft are being supplied to the Russian Air Force. This is an upgraded version that has received fully digital equipment and a modernized radio engineering complex. Improved target detection performance in the rear hemisphere, as well as the ability to detect surface targets. The upgraded version has a smaller mass, a large number of simultaneously accompanied targets, as well as a higher comfort for the crew. On the plane appeared buffet with appliances and lounge crew.

Today, not much information can be found about the Chinese DRLOI KJ-200 aircraft. This aircraft has been developed since the beginning of the 2000-s. The first time the plane took to the air in 2005, in 2010, it was first lit at the exhibition, as a static exhibit. The aircraft was created based on the Y-8 military transport aircraft (a licensed version of the Soviet An-12). The Navy and the PLA Air Force ordered this aircraft in accordance with the requirement for the development of a low-cost DRLOI aircraft. 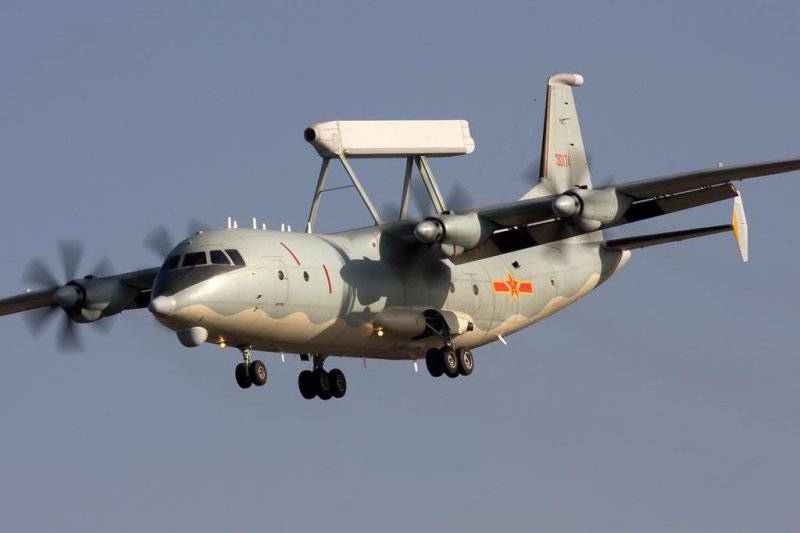 Aircraft KJ-200 is a different concept of placing radio equipment on board the aircraft. Instead of 3-x active phased antenna arrays, which are located a triangle inside the disk fairing over the aircraft fuselage (the same disk above the aircraft for which they are sometimes called "flying mushroom"), on the KJ-200 aircraft only 2 antennas that are installed in the dorsal plane box container. This design has its drawbacks - “dead” forward and backward viewing areas. Therefore, there is an assumption that additional antennas can be installed in the nose and tail parts of the aircraft.

The wingspan of the aircraft is 38 m, length - 34 m, height - 11,6 m. The aircraft can accelerate to a speed of 662 km / h and is in the air for about 10 hours. It is assumed that the aircraft is equipped with AFAR radar, created in the framework of the project GaoXin 5, which is located in the fairing over the central part of the fuselage. This radar is able to detect targets at a distance of 300-450 km. Currently, the aircraft is manufactured in series, but the exact number of units released is difficult to call. Evaluating the photos available on the network, one can speak of the presence in China’s arsenal of at least 3-like aircraft.

The B737 AEW & C AWACS aircraft project takes its report from 2000, when the Australian Ministry of Defense ordered its development from the American concern Boeing. The plane made its first flight in 2004. The aircraft was adopted by the Australian Air Force in 2009. Currently, there are 6 such aircraft in the Australian Air Force, another 4 aircraft were ordered by Turkey (the first was delivered in early 2014) and South Korea (received at least 1 aircraft). In service with these countries, the aircraft received their designation Wedgetail (Australia), Peace Eagle (Turkey) and Peace Eye (South Korea). 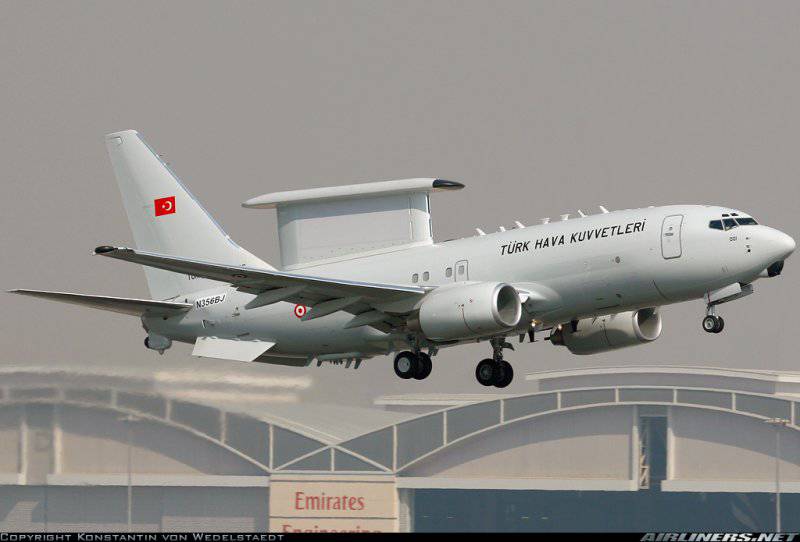 The aircraft was designed on the basis of the B737-700IGW passenger liner. The aircraft was originally announced as a simplified version of the E-3 Sentry. The main radar of the aircraft is MESA (Multi-role Electronically Scanned Array, multi-purpose electronic scanning area). It provides a 360 degree viewing angle. This radar is installed on a pylon in the rear of the vehicle. The radar is able to track both airborne and surface targets. The detection range of air targets of the "bomber" type is 600 km, of the "fighter" type - 370 km, of surface targets of the "frigate" type - 240 km. The aircraft can simultaneously track up to 180 air targets, directing 24 fighters to them. In addition, the aircraft is equipped with electronic reconnaissance equipment that allows the B737 AEW & C to detect a radio wave source located at a distance of 9 km from an altitude of 850 thousand meters.