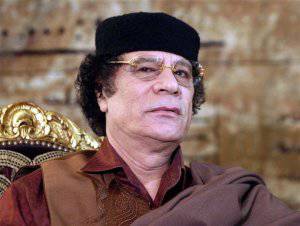 The situation that has developed in Libya can only be described as a dramatic event in the life of all the people of this state. But, as a rule, it is precisely in such situations that the viability and viability of the governments of other countries, which by their lack of will could prevent such tragic consequences, manifests itself. In this case, we are talking about our native Russian government, which, in its foreign policy, showed every lack of pragmatism, balance and rationalism. First of all, we can recall the adoption of the resolution by the UN Security Council on Libya, which actually officially allowed the coalition air forces of Western countries to launch missile-bombing attacks on Libyan cities under the pretext of a peacekeeping mission. Russia showed the absence of any common sense and, in silence, actually endorsed the adoption of the resolution.

It is clear that in this situation, the Western media will glorify their leaders and put all the blame for what happened on the tyrant Gaddafi, who for years destroyed his people. According to the western version of the current situation, the Libyan people rose up to fight for freedom and democracy, and the coalition air force aircraft only support the legitimate democratic right of the people. From television screens, citizens of Western countries see only traces of the criminal activity of Gaddafi and their heroes who save an entire people. Strange, but recently you can hear allegations that Western countries act only at the request of Arab countries. Realizing that in this case, NATO has gone too far, its officials are trying by any means available to throw the blame on anyone. It is strange to hear from people who six months ago called Gaddafi as their friend and equal partner. More recently, Sarkozy solemnly took the money to conduct elections, and Silvio Berlusconi, and even more so, he kissed the hands of the "leader of the Libyan revolution."

And now let's look at the one who appears in the media of Western countries in the image of a tyrant and a despot, but we will look without bias and only on the basis of reliable facts.
During his reign, Muammar Gaddafi was able to build an economically strong state, which undoubtedly affected the living standards of the population and, we note, in a positive way. Gaddafi is not only an educated person, but also a supporter of an educated nation. In its government program a compulsory item is education. During the reign of a tyrant, Libya came in first place among the countries of the African continent in terms of education. Gaddafi managed to bring the country out of the protracted crisis in which it had been located for many years, he was able not only to adjust oil production, but also organized its correct implementation, which brought billions of dollars to the state’s treasury.

And now let's see who has rebelled against Gaddafi, who are these tortured and trampled insurgents who can no longer live under the control of an aging colonel. First, a little stories. Gaddafi came to power in Libya as a result of the revolution and the overthrow of the pro-Western king Idris. Western countries have long regretted overthrowing the puppet regime, which America led very well. All the resources of the state were controlled by the United States and its allies, and, obviously, the rise to power of Gaddafi and the return of the state’s natural wealth to public ownership, naturally, many could not like. Now regarding the uprising: the main instigators were the tribes of the very Idris, who was so loved in the West. And now there is quite a logical question - who could provide them weapons and many others, so necessary to incite a revolutionary movement? Fight for democratic values ​​and freedoms? Far from it - just someone really wants to get access to huge incomes from the export of Libyan treasures - oil. Perhaps, for help in seizing power, the West will receive a fairly decent setback. These people decided to turn the situation that has developed in North Africa in their favor, in order to snatch a piece from the Libyan subsoil, and all loud statements about democracy are a cover behind which it is convenient to turn around dark affairs.

Obviously, in the times of the Soviet Union all the events taking place in Libya today would have received a completely different interpretation. The modern leadership of Russia frankly demonstrates its antipathy towards Gaddafi, and above all this applies to President Dmitry Medvedev, but at the same time it is indicated that, despite all the events, Russia is ready to hold talks with the Libyan government. One thing is interesting - the Russian media are trying to imitate their Western colleagues in everything, and the Gaddafi regime is in full swing, calling it anti-democratic and despotic.

It’s time for Russia to decide with whom it is with Western countries or with China, or to go on its own independent course. At the moment in our country there is a kind of duplicity of top management. On the one hand, they curse the government of Gaddafi, and on the other, they are ready for negotiations. In relations with Iran, Russia is helping to develop nuclear programs, albeit peaceful ones, and at the same time is eager to participate in the missile defense program for protection against Iran. For one event, Russian officials have two completely different points of view. They sympathize with Japan and send humanitarian supplies, rather than officially negotiating the transfer of the world championship in figure skating. It turns out that Russia gives with one hand and takes it with the other, but this badly affects not only the image of high-ranking persons, but also the image of the entire state. It's time to remove the existing uncertainty and learn how to express your thoughts about certain events and stick to them, despite the opinion of the United States.
Ctrl Enter
Noticed oshЫbku Highlight text and press. Ctrl + Enter
Military Reviewin Yandex News
Military Reviewin Yandex Zen
5 comments
Ad