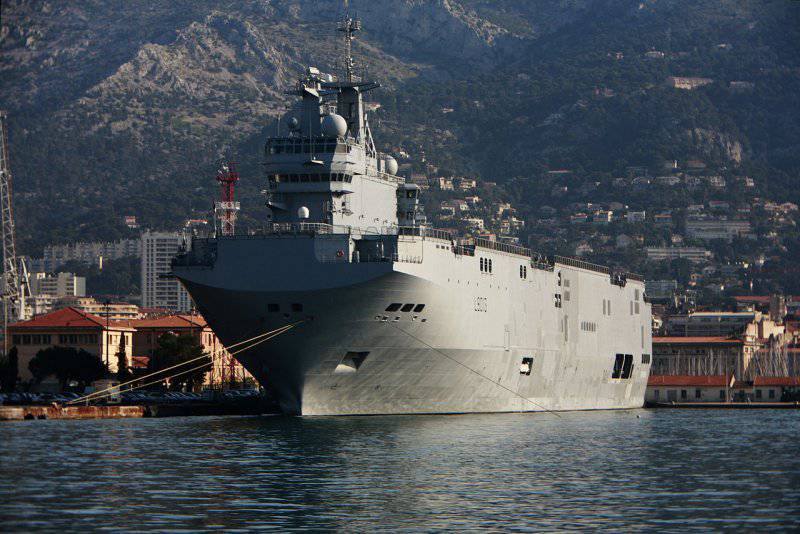 Despite the ridiculousness of the sanctions imposed by the West, Washington and Brussels are still hoping to at least slightly mischief Russia. So, France threatened to terminate the agreement on the sale of two UDC "Mistral" to the Russian Naval Fleet. Paris must be given its due: he, along with Berlin and Rome, until the last did not want a confrontation with Moscow, but it seems that US President Barack Obama still managed to convince Francois Hollande to join the anti-Russian bloc. At the same time, France understands that sanctions will be ineffective and only harm the political prestige and national economy of the Fifth Republic.

Deal of the Decade

The agreement on the construction of Mistral class amphibious assault ships was signed by representatives of Russia and France in June 2011. Helicopter carriers are engaged in the construction of the French company STX, whose shipyards are located in the city of Saint-Nazaire, although the stern is assembled at Russian enterprises. In addition, Russia will also deal with the pre-armament of ships. To equip a single UDC, it will take at least a year — such dates are laid down in the plans of the Ministry of Defense.

One of the UDC "Mistral", called "Vladivostok", 5 March has already left the port of Saint-Nazaire and went to sea trials. The second ship "Sevastopol" is almost completed, it should be launched this summer. Now his stern is being completed on the slipway A of the Baltic Shipyard, after which they are towed to France, where the final assembly of the helicopter carrier will be completed.

Russia planned to locate both vessels in Ulysses Bay in Vladivostok: On February 11, the first pile of the berth intended for servicing Mistral-class ships was filled. Both UDCs are assigned to the Pacific Fleet - temporarily. Officers of this fleet are retrained in St. Petersburg in order to serve in foreign helicopter carriers.

When buying Mistral, Russian specialists were most interested in the SENIT-9 combat information management system — one of the latest foreign developments. But France promised to transfer the secrets of this technology to Russian specialists only on condition that Moscow orders the construction of two more ships. It is known that the blackmail did not work, and both sides remained with their: Russia buys only two helicopter carriers, and France keeps military secrets.

17 March was warned by Laurent Fabius, head of the French foreign ministry, that the sale of the Mistral UDC could be canceled. The logic of the Parisian official is interesting: in his words, France will take such measures if "a further escalation of the conflict occurs in Ukraine". How is the political crisis in Kiev connected with the introduction of sanctions against Russia, Laurent Fabius did not elaborate.

It turns out that if some “Right Sector” somewhere in Lviv or Ivano-Frankivsk once again attacks the prosecutor's office or the SBU, will Russia be responsible for this? The conclusions of the French official completely divorced from reality: the fate of the contract concluded between the military departments of the two influential powers, depends entirely on the actions of juvenile delinquents.

Laurent Fabius considers the refusal to sell Mistral to the third stage of the sanctions imposed against Russia. According to the estimates of the French Foreign Minister, the United States and European countries are now at the second stage, and only a little bit is left to the third.

However, the official completely forgot that the purchase of helicopter carriers is an exclusively political decision. At the time when the deal was concluded, relations between Russia and France were rather warm, and both countries were counting on long-term mutually beneficial cooperation.

Even on the eve of the signing of the contract, Russian experts began to argue about whether to buy ships at all: according to experts, the Russian fleet does not need the French UDC. The fact is that foreign helicopter carriers are not adapted for Russian-made helicopters, which, when landing on the deck, increase the height of the vessel. The ship from this becomes less stable.

Also helicopter carriers are not adapted for walking in the ice - and this is a prerequisite for the operation of ships in the northern latitudes. The Mistral design is such that they will not be able to go to sea even with a small ice cover, which makes it impossible to use them in the Baltic Sea, in the Pacific Ocean, and even in the Black Sea basin.

Moreover, the money paid to French shipbuilders could be used to build modern ships of a similar class at shipyards located in Russia. This would not only equip the naval forces, but also stimulate the modernization of domestic enterprises. Engineers are guaranteed to be able to design such vessels that would exactly correspond to the technical features of Russian-made helicopters.

At the same time, the cost of building ships in Russia is much less than abroad. Why "Mistral" decided to buy from France - a separate issue to military officials responsible for such a decision.

But, despite any mistakes, Russia does not lose anything because of the actions of Monsieur Hollande. France now has to pay damages to the Russian military department - yes, what!

How France punished herself

The termination of the sale of such equipment as a helicopter carrier will be a serious problem for France. Paris will face such difficulties as:

• refund of the contract amount to Russia - 1,2 billion dollars, while 80% of this amount has already been transferred to French accounts;
• additional payment of a multi-billion dollar fine for failure to comply with its obligations;
• great difficulty in finding buyers who are ready to purchase unfinished ships;
• loss of foreign policy prestige: hardly anyone will want to get involved in a country that does not adhere to the agreements reached.

Russia has the right to file a lawsuit in the Geneva Arbitration Court. A few years ago, Moscow itself got into an unpleasant situation when it refused to sell Iran a batch of the latest anti-missile systems worth about 700 million dollars. Then the representatives of the Islamic Republic appealed to the international community with a demand to judge the dispute, and the trial ended in favor of Iran: Russia paid 4 a billion dollars to its partner.

It is easy to imagine how many billions can be demanded from France. The cost of the deal between Moscow and Paris is almost two times higher than in the case of Iran. Accordingly, compensation payments will be much more.

With this money, Russia will be able to build several ships capable of competing with the Mistrals on an equal footing, but at the same time suitable for operation in the seas washing its shores.

If France freezes the funds intended for compensation payments, such actions will be regarded as international piracy and a violation of the basic principles of cooperation between states. Paris will lose face, and will become an outcast not only in the east, but also in Europe itself. The loss of prestige will be an unbearable blow to French diplomacy: the country is now trying to gain a foothold in Africa, and it needs a crystal clear reputation.

And Russia remains the winner, regardless of whether sanctions are imposed. The choice is simple: either the Navy gets new helicopter carriers, or Paris pays a huge fine.

As for the berth for the Mistral in Vladivostok, it will not be empty: even if the French UDC does not get to the Pacific Fleet, it is still planned to deploy a compound of other ships in Ulysses Bay.