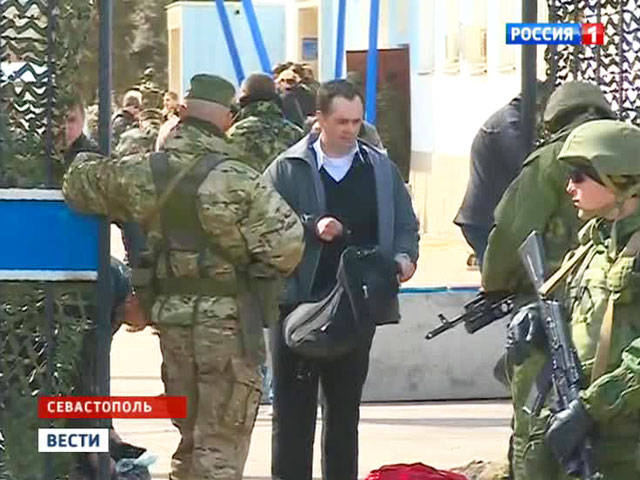 Over the headquarters of the Ukrainian Navy in Sevastopol raised the Russian flag. On the morning of March 19, a rally began at the military unit, the participants of which entered the territory and, together with the self-defense fighters, took control of it. Ukrainian officers, led by Navy Commander Vice Admiral Haiduk, voluntarily left headquarters, taking things with them.

The territory of the headquarters of the Naval Forces of Ukraine took control of self-defense units. Crimeans demanded the immediate release of the soldiers, who were held hostage.

The form is hung on the trees, the shoulders are still rocking. Everything went without a shot: given the time to calmly get together, pick up personal belongings.
"They leave without weapons everything. So - all is calm. Who is a citizen, who comes out in form. Calmly, I'm not detaining anyone. Everything is peaceful, everything is good ", - emphasizes the chief of staff of the defense of Sevastopol Oleg Roslikov.

In recent days, the senior officers seem to have begun to lose their nerves.

On the territory of the unit there is a construction where firewood is located, next to it a stove and a suitcase, apparently, with secret documents. Inside is empty. Just some kind of red folder. All burned.

The headquarters of the Naval Forces of Ukraine was preparing to keep the defense.
- And what's that?

“I see that this is sand. Apparently in order to scatter in the attackers during the storming,” explains the participant of the self-defense detachment Viktor Seletsov, examining the bags tied from bags.

Next to the wall is an instrument of information warfare. The battle sheet - here everything is politically correct for Kiev: the referendum is illegitimate, independence was declared under pressure from Russia. The same experienced propagandists told the sailors horror every day.

“They are being intimidated. They are threatened. I have a lot of calls. They say that their commanders are intimidating. They say that if you leave, write a statement saying that you don’t want to serve Ukraine anymore - we’ll shoot you in the back” says the chairman of the Sevastopol City Committee of Soldiers' Mothers, Nadezhda Savitskaya.

The fighters were hungry. Neatly spread out crusts of bread - an assortment of staff dining room.

"I looked at the conditions in which they lived there, right up to the fires inside the rooms on which they heated their food. And you saw the faces you finished, your hands were dirty? There was nowhere to wash!" - said Oleg Roslikov, Chief of Defense Staff of Sevastopol.

Judging by the state of the work premises, the command was preparing for a long siege.

One of the headquarters offices. Here are stored suhpayki, several boxes. Water reserves Equipped with a bed directly on the chairs.
“The overcoat of a captain of the first rank. I don’t know who lived here, how he lived here. The people are military. They received orders, they were in barracks. They lived in barracks and could not leave the territory of the unit,” Igor Gritsky comments.

Fighters of self-defense detachments pay tribute: the officers themselves behaved like men. Not they, but they were betrayed - the command in Kiev.

"The duty officer attempted to report back to Kiev. During my shift, the captain of the first rank tried to contact Kiev by mobile communications or military communications. Kiev was silent! Demonstrative! There, all communications were cut off. The Kiev command had betrayed them! The officers were true to duty. Their command betrayed, "- explained the staff officer of the self-defense of Sevastopol, Oleg Zhukov.

“All our fellow countrymen, brothers. They made a corridor to applause. People are hostages of the situation. Nobody considers them enemies. Everything is normal. Everything is calm,” said Ataman of the Black Sea Cossack hundred, Anatoly Mareta.

The soldiers have a choice - they can stay in the Crimea, serve in the Russian army, and can go to serve in Ukraine. There are no obstacles for this. But an attempt to remain faithful to the Ukrainian oath may end badly.

“Two officers of the service are safe Ukraine moved to Ukraine. They were detained there as criminals”, - cites the example of the Cossack regiment ataman Baklanov Vyacheslav Sarovatkin.

The sailor Evgeny Avkhimovich has already made a decision for himself.

"Of course, all my relatives will support me. I want to serve in the Russian army. I am a Sevastopol!" - Yevgeny Avkhimovich, a sailor of the company of the guard of honor, is recognized.

Above the building, the Russian tricolor and St. Andrew's flag are raised. Now all the buildings are guarded so that there is no looting. And tomorrow they plan to transfer the property to the Russian Black Sea the fleet.

Ctrl Enter
Noticed oshЫbku Highlight text and press. Ctrl + Enter
We are
The flag is hoisted on the nuclear submarine Severodvinsk!Above the school named after Nakhimov solemnly raised the flag of Russia
Military Reviewin Yandex News
Military Reviewin Google News
90 comments
Information
Dear reader, to leave comments on the publication, you must sign in.