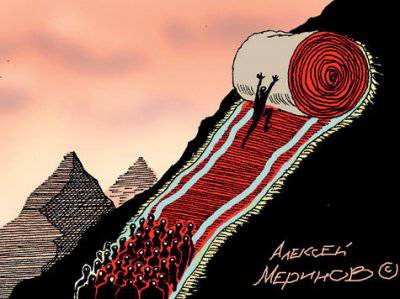 Previously, the term "democracy" was interpreted as "people's rule". It would be absolutely fair to translate it now as the "rule of the people." And this is actually a science.


It is no secret that the main weapon pressure in our time is not a nuclear weapon, not aircraft carriers, and the media, public opinion and an organized crowd. And here's a chain for you that creates a precedent: the properly organized crowd supposedly expresses public opinion, and the “right and honest” media properly present it to all who want it. The result is known: from the rally in support of the rights of hamsters to Maidan. Although it can be easier. As in Kosovo.

The question is: why brainwashing has become such a successful weapon? What makes it possible to implement a specific strategy in the philistine thinking apparatus?

In my opinion, there are several components that allow you to successfully create and develop the "fifth column". And Russia is no exception.

The rhythm of modern life is such that the average man in the street often does not have enough time. On thinking, awareness and understanding. And why? There is the Internet, which upon request is ready to provide any information in any form. A sort of ersatz-gum for the brain. Plus "word of mouth", which is experiencing overdevelopment thanks to social networks. It is necessary to make any "stuffing" in the social sphere, as soon as there is a minimum of those who like it. Further, the thumbed-up mechanism of mailings and reposts will promote the most insane thought to the masses. And, characteristically, the masses will eat!

In principle, the Internet is even useful in this regard. Dissenters and simply narrow-minded (not to say - just fools) with great pleasure, plus and comment. So even easier to identify easier. But real pests are always behind the scenes ...

The problem is in the brain. It is normal for a person to strive for a certain frontier, which makes it possible to conclude that he is somewhat different from the general mass. It is prestigious. This elevates a person in his own (and sometimes not only in his own) eyes. And this is the problem.

When the USSR collapsed, the system of patriotic education collapsed. A new, alas, was not created. And what kind of education could be discussed in the nineties of the last century? Yes, and at the beginning of this. The past is wonderful. Especially if in the past there is something to be proud of. We have something. And what could be proud of in our most recent past? Loan credits from the West? Ruined economy? Workers who do not receive a salary or receive it with what they produce? An alcoholic in the chair of the president? Doubtful pride is obtained ...

And what's on the other side of the barricades? A flood of information about how TAM is beautiful and easy to live. "New Russians", the ideal of success and welfare. The oligarchs who replaced them are also new, but not entirely Russian. And the stream, the flow of photos and video stories and stories about resorts, luxury and so on.

Show the alcoholic in the morning a bottle of vodka. Show addict bag with a dose. Show. Do not give. What happens, guess?

Anger. Malice. Envy. Despair. The eternal question, why is everything good there, but here we are in shit? This is a good question. And the answer “We must work” is no good. After all, those who flaunt luxury, mostly did not work. But you want now. Immediately. And more.

And, if at this moment we begin to whisper that the authorities do not care about the people, that everything is sold a long time ago, that only where democracy and a developed society can be appreciated and accepted. Fertile soil for such crops.

Alas, dear dissidents, Europe is not rubber. Cheap labor is enough there. From Poland, Romania, the former Yugoslavia, Greece and other "developed". Moneyless, but wanting to live beautifully above the roof. They do not have time to deport.

And systematic and painstaking work is being done to reorient the brains of uncertain, vacillating and just fools. And it turns out.

I am seriously interested in the fact of the appearance of not just the “fifth column”, which is against something, but an oriented fifth column. Oriented to alienation, rejection, and so on. On the unconditional support of any event that harms our country. Having done something like an express survey on social networks with one single question “Why do you dislike Putin’s policies?”, I got a result that stunned me. I interviewed about forty people, mainly where they support the Maidan and the members of the Ingermanland group, who advocate for ... the separation of the Leningrad Region and its joining to Sweden.

The most interesting thing is that the overwhelming majority of the respondents I interviewed could not really formulate the reason for their opposition. What's so complicated, tell me? Reply not live, you might think, write and send a response. This is the result I got if I somewhat “pull” the answers to a common denominator:

1. Putin is pursuing a policy that will finally destroy the country. We will be sold (5 people).
2. Putin usurps power, we are waiting for the dark times of the empire under his rule (8 people).
3. Putin is not able to lead us into such a bright future, so that we do not do anything, but live like in the US (9 people).

This is a strongly generalized opinion. Actually, it's getting worse. More than half nothing at all could not articulate. "Baba Yaga against, and everything."

Well, come. Yes, these are problems both at home and in school. There is no dispute, much has been missed, but this does not mean that one should give up. On the contrary, precisely today, in the wake of some euphoria from the return of the Crimea, it is necessary, rolling up our sleeves, to use all that is possible to create opposition to our “fifth column”.

Ctrl Enter
Noticed oshЫbku Highlight text and press. Ctrl + Enter
We are
Results of the week. "Now he will speak, and I will translate from merikansky"Results of the week. “In our cooperative, the board is always agreed”
Military Reviewin Yandex News
Military Reviewin Google News
42 comments
Information
Dear reader, to leave comments on the publication, you must sign in.