Kiev leaves no hope to return the Crimea by force 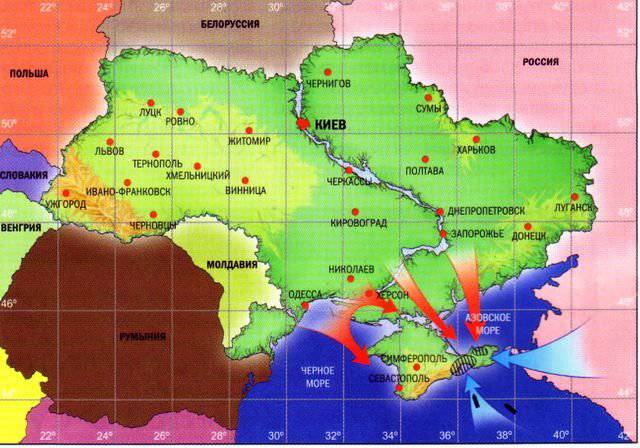 The deed is done - a referendum was held in Crimea, an agreement on joining Russia was signed. But the situation does not become calmer. It seems that Kiev is acting according to the old saying “a pig will find dirt”, and who wants to fight drunk will definitely return home with a broken physiognomy.

Recently, hackers cracked a mailbox on a Gmail service that was supposedly considered safe. The box belonged to Igor Protsyuk, Colonel of the Ukrainian Army, and Head of the Department of Bilateral Military Cooperation in the General Staff of Ukraine. The stupid officer kept his correspondence in a box for several years, and not only personal, but also official. As a result, interesting materials leaked to the Web.

Among the documents lost by the messy officer was an assessment of the operational situation around Ukraine. It contained numerical data on the deployment of Russian army groups near the border with Ukraine and in Crimea. Moreover, with a breakdown by units and formations and with an approximate number of personnel, equipment and weapons. Judging by these data, the General Staff of Ukraine believes that up to 6 Russian shock groups plus a group in the Crimea with operational reserves are potentially threatened by Ukrainian troops. They can attack from four directions. Together with reserves, the General Staff of Ukraine estimated the strength of a potential enemy at about 50 thousand people, about 500 tanks, 1400 armored combat vehicles, more than 200 aircraft and helicopters.

In Russia, concentration of troops is explained by teachings, and this is true. Moreover, Moscow even offered to make a control flight around the disturbing areas under the Open Sky program.

In general, apart from the banal provocation of the population of the southeast and Russia, the mobilization and movement of troops have another goal. Economic. In the case of the defense of the sea nenka from the Moskal-Mongol hordes, as is well known, all means are good, especially those that can be “mastered”.

In particular, the Ukrainian oligarchs sell fuel for their “favorite defenders” at a price that is too high in 1,5 – 2. Equipment and equipment are purchased with a non-market mark-up. Moreover, they are sold by all the same oligarchs like Kolomoisky, who had previously actively promoted their "free" assistance to the army. They help so actively that, according to Ukrainian journalists, the allocated funds from the reserve fund will be spent in a couple of weeks.

Ukrainian army is better not to shine

The stolen document by the hackers of the General Staff of Ukraine shows a clear attempt to gloss over reality. To diminish the potential threat and invent Russian troops at least some non-existent flaws such as low population support in the southeast and the Crimea. Nevertheless, it shows that there is simply no chance for Ukraine’s army in the event of a conflict. Even the indicated number of the Russian grouping does not leave much hope, and the list of quite real advantages of the RF Armed Forces is very long.

It contains a high level of training of military personnel, and extensive combat experience, and a high saturation of troops with modern equipment, communications and combat control systems, electronic warfare systems (EW). High mobility of units, the ability to act in isolation from the main forces and powerful combat-ready aviationequipped with experienced crews, and much more. It's nice when our army is appreciated.

Understand in the General Staff of Ukraine and the inability of NATO and the EU in the event of a conflict to counter Russia. It is likely that this fact prompted to abandon the attempt to force the breakdown of the referendum. It seems that everything is clear and understandable - it is impossible to speak about war and speech. You need to sit quietly, "covered with a rag and not gleaming." But Kiev is not looking for easy ways.

Money for the army is collected on the porch

In an effort to strengthen the staggering power by creating an image of an insidious enemy, Kiev not only builds up forces on the border with the Crimea, but also moves everything that it is possible to budge to the south-east. Supposedly to cover the borders. The so-called Minister of Defense of Ukraine, Admiral Tenyukh, who earlier claimed that there are only 6 thousand people in combat-ready units in the army, now cheerfully reports about the allegedly achieved “parity in forces” with Russia. And that does promise to discourage the Crimea.

Given the variegatedness, the aggregation of the APU groupings being moved, their low equipment and training, it is not clear what the land-based naval commander is interpreting in general. Kiev then cheerfully reports an additional allocation of 6 billion hryvnias from the reserve funds to the army, then tearfully asks oligarchs and ordinary people to throw off the “defenders” either to petrolatum, then to tank batteries, then to “unload”, then to the radio. Even typical schemes of divorce for money, such as sending SMS to a short number with the aim of helping the army, are used. You can still in the churches of the Kiev schismatics and Uniates put circles on the porch - maybe it will help.

A few days ago, even a partial mobilization was announced in Ukraine. It is planned to recruit 20 thousand people in the army in 45 days and the same number to the National Guard. I would like to immediately notice that such unhurried mobilization is simply a laugh. And the number of recruits will only allow to reduce the holes in the staffing of the parts. But, probably, something was conceived in Kiev.

The newly formed National Guard is made up of the former internal troops of the Ministry of Internal Affairs and border guards, with the addition of the Maidan’s self-defense forces and the Right Sector to them as reservists. So far, this parody of the army and the process of training reservist fascists without humor will not look. There is a great desire to fight the “Muscovites” there, but it is unlikely to last after the first meeting with the enemy. However, these thugs can massacre the population of the southeast. For this, apparently, and armed.

Therefore, military convoys from Western Ukraine in the Donetsk and Lugansk regions are not welcome. The local population puts pickets on roads and train stations, turning the military back. And often they do not mind, knowing full well that they are simply being substituted for the Russian army.

The strategic position of Crimea allows you to control Ukraine from the south and almost the entire Black Sea from its territory. The importance of Crimea in the aviation age has especially intensified. Hitler called him “an unsinkable aircraft carrier threatening the oil fields in Romania”. Until 1991, the Soviet Crimea was such an “aircraft carrier”, providing the fleet an excellent, extensive network of bases: Sevastopol, Donuzlav, Balaklava, Kerch, Feodosiya, etc. Now, after 23 years of untimelyness, all these bases and airfields are returning to those who really need them.

The process is fast. Long-range mobile anti-ship complexes "Bastion-P" with supersonic Onyx missiles have already been delivered to the Crimea. Together with the same complexes on the coast of the Krasnodar Territory, they control the water area of ​​the Black Sea by about two-thirds, sweeping it to the Turkish coast. Even almost to the exit from the Bosphorus. Modern systems of air defense of ships against these missiles are ineffective.

Seen in the Crimea and simpler complexes "Ball". They are equipped with less long-range and subsonic missiles "Uran-U". Obviously, this junior complex in our anti-ship cage is designed for shooting targets that are too expensive for Onyx - for example, boats.

At the same time, the airfields are rapidly becoming settled. Through the Kerch Strait, there is an active airfield equipment and radar equipment. The radar network of the standby mode, such as "Caste-2М2" and others, is being developed. The C-300PM air defense missile system is being deployed on the territory, and the C-400 C-300 can probably be deployed. The Pantyr-S air defense missile system was introduced to protect critical objects and long-range air defense systems. Most likely, the C-XNUMXPS airplanes of the former Ukrainian anti-aircraft missile regiment in Fiolent, and other air defense systems and radar stations located in the Crimea will be brought into the divine form. It should be expected that the aviation group of fighter and assault aircraft will soon fly there. The sky will be closed securely.

Increases and land grouping. On the peninsula, the MLRS "Uragan", the upgraded "Grad", the Msta-B howitzers and the new BTR-82A in large quantities are seen. And in the battalion columns in a significant amount there are the latest EW complexes, such as “Leer-2” and “Infauna”. In general, the “polite people” who, most likely, will soon again put on their usual insignia - this is not the army of some Ukrainian ragged people.