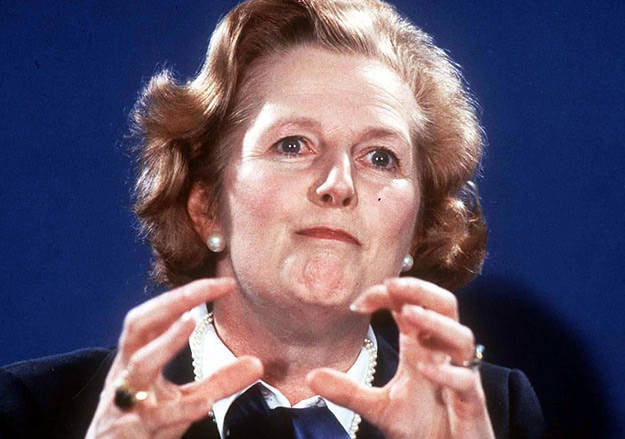 Portal "However," continues the special project "False Idols of the West." We would like to present to the reader’s attention genuine portraits of those people who are considered to be indisputable authorities in the USA and Europe, a kind of religious characters who determined the development of civilization. And we are talking not only about politicians, but also about the philosophers and artists who created the Western cultural matrix.

One of the most revered idols in the West is British Prime Minister Margaret Thatcher. “The world has lost one of the great freedom fighters,” Barack Obama announced last year, having learned that the Baroness had passed away. But why did thousands of Englishmen so vigorously celebrate the demise of the “iron lady”, shooting champagne jams in the air, dancing and singing the once popular song of the rock band Hefner “When the witch dies”? "We will laugh on the day that Thatcher dies, and although we know that this is wrong, we will dance and sing all night," they cried.

Thatcher hated the poor, the students dubbed her the "evil witch", and the aristocrats considered an upstart. She became the creator of the British version of neo-conservatism, a harsh social and economic policy pursued by the Tory government in the 80s. For the sake of economic recovery, Thatcher didn’t stop at anything: when she was Minister of Education in the government of Edward Heath, she canceled distribution of free milk for schoolchildren aged from 7 to 11 years, for which she received the nickname “Milk Thief” (“Thatcher - milk snatcher”) . During the years of premiership, she reduced assistance to depressed regions, sharply reduced social spending, and closed unprofitable mines, leaving tens of thousands of people unemployed. When mass protests began, she mercilessly dispersed them with the help of mounted police. And in the end, she managed to “finish off” the trade unions, which she considered to be “internal enemies of the state”. “I am not a man of compromise, I am a man of conviction,” she said. - I have nothing against my ministers talking a lot. The main thing is that they do my will. ” It was almost impossible to convince the “iron lady”. “It was a lady with strong character,” said SVR veteran Mikhail Lyubimov in an interview with “However”. “It came from a petty-bourgeois environment: very practical, very organized and rational in its own way.”

Colleagues called her "neurotic punctual" and compared with the English train, which always comes on schedule. She urged the British not to wait for handouts from the state and to rely on their own strength in everything. “Thatcher,” writes the Guardian, “shared the philosophy of social Darwinism — that is, was convinced that the strongest survive in society, as in nature.” Yes, it took Britain out of the economic crisis with extremely tough measures, but at the same time supported the most predatory and aggressive individuals, not sparing the others.

“There is no society,” she used to say. “There are only separate men and women.” In Britain, of course, many did not like this thesis, and opponents claimed that Thatcher headed the most hated government in stories country. “The pill is bitter,” answered the “iron lady,” but the patient cannot recover without her.

Relations with Roni and Gorby: Victory in the Cold War

In foreign policy, Thatcher also could not tolerate compromises and defended with all her might the prestige of the dying British Empire. Perhaps most clearly this was manifested in the 1983 year during the Falkland crisis. The Argentine military junta then occupied the islands, which were ruled by the British crown. And although they were located off the coast of South America at a distance of more than a thousand kilometers from Great Britain, Thatcher decided to use force and dislodged the Argentines from the territory of the disputed islands. Latin Americans immediately dubbed her "pirate" and accused of reviving imperial politics. However, US President Ronald Reagan supported his British ally.

The American leader was generally very affectionate towards Margaret. He listened to her advice and even called the joke an unofficial member of his administration. Thatcher herself spoke about Reagan with a gasp. “He was a movie star, and she was a screenwriter,” wrote Reagan biographer Lou Cannon. “Both pursued a neoconservative course in economics and considered the fight against the Soviet evil empire a matter of their life.”

At the start of 80, Thatcher supported ground-based missile deployment plans in Europe and tripled Britain’s nuclear forces. However, in addition to the arms race, which was supposed to undermine the economy of the Soviet Union, it was required, as Thatcher noted later, "to find a communist leader of a new type, ambitious, inspired and ready for concessions to the West." And such a leader was found. In 1984, advisors suggested Thatcher invite Mikhail Gorbachev to London. Gorbachev was then secretary of the Central Committee of the CPSU, responsible for agriculture, but in the UK he was taken as the first person. Thatcher called the Soviet representative to her suburban residence of the Checkers and held “fruitful” negotiations with him, which lasted for several hours.

“Gorbachev pulled out a General Staff card with all the secrecy grids on the table,” said Alexander Yakovlev, a participant in that meeting, “it showed the directions of missile strikes in Great Britain ...“ Mrs. he declared. "Yes," replied the somewhat confused Thatcher. After the meeting, the “Iron Lady” said: “You can do business with this person.” Indeed, when an official, in order to achieve his position in the West, is ready to put top-secret information on the table, things can be done with him. And even need.

When Gorbachev was appointed general secretary of the Central Committee the following year, Thatcher began lobbying him in Washington and persuaded Reagan to abandon harsh rhetoric and build bridges with Moscow. She sought to “strengthen Gorbachev in the feeling that the whole world would help him with restructuring,” played on the complexes of the young general secretary and, admiring his ideas, pushed for new concessions. Thatcher flirted with the team and Gorbachev. According to Vadim Medvedev, who at that time was a member of the Politburo of the CPSU Central Committee, in 1989, in violation of the diplomatic protocol, the “Iron Lady” invited him to her at Downing Street and courted him for an hour.

In 1987, during a visit to Moscow, Thatcher did not tire of praising the wisdom and courage of the Soviet leader. However, this did not prevent her from recognizing the right of the Baltic republics to self-determination and thus cast doubt on the territorial integrity of the USSR. And although in Britain she was accused of being too fascinated by Gorbachev and could not judge him objectively, the “iron lady” never forgot about the pragmatic interests of Western countries. No wonder many historians call it the winner in the Cold War, "crushed the communist hydra." As for Gorbachev, it’s probably no coincidence that this retired politician met his 80 anniversary in London.

Ctrl Enter
Noticed oshЫbku Highlight text and press. Ctrl + Enter
We are
"Iron Mask" and the castle of St. Margaret IslandFalse idols of the West. Part I. Winston Churchill, racist and hangman of nations
Military Reviewin Yandex News
Military Reviewin Google News
13 comments
Information
Dear reader, to leave comments on the publication, you must sign in.