A.Parshev: “The territorial integrity of Ukraine depends on respect for human rights there” 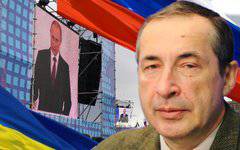 The head of the Russian state, Vladimir Putin, spoke in the Kremlin before the deputies of the State Duma, members of the Federation Council, heads of Russian regions and representatives of civil society with an appeal about the reunification of our country with Crimea.


The President said that we are not always aware

Putin said what was expected of him, and this is the most important point of his speech. It was clearly stated that the Crimea is Russian land and that its accession meets all democratic norms. Reference was made to the norms on the basis of which both Ukraine and the United States were created. This is the right move that knocks out. weapon have bona fide opponents. And for unscrupulous opponents need a little different conversation.

The President said that we are not always aware. That is, the crisis situation itself is not local in nature, but is the result of the redistribution of forces in the world. We are on the same side with India and China, and they supported us in this situation. This is very important to us.

I believe that Putin in his speech revealed what he rarely does. He recalled 1999 the year when NATO forces bombed the European capital, Belgrade, for several weeks in a row. We then experienced a real shock, although a few years later those events were somewhat forgotten. So now we have remembered this, and what is happening in our days is connected with what happened in 1999 year. Vladimir Putin emphasized this moment, and this is an essential part of his speech, which shows what kind of world we ended up after the collapse of the USSR. It was no coincidence that it was said that the spring is already compressed against the stop, and therefore it opens up. Putin emphasized this aspect, and I pay special attention to this episode.

Bandera power in any case will not hold

I note that, despite the return of the Crimea to Russia, Putin is a supporter of the territorial integrity of Ukraine. He is not determined to separate the eastern regions from Ukraine, this is not among his goals. He says that the Bandera power in any case will not hold, but we are not striving to ensure that only Bandera reserve in its west remains from Ukraine.

At the same time, at the referendum in Crimea, the question was raised clearly: either there or here. This contrasts with what is happening in other regions of Ukraine. In some areas, people’s meetings are held there, but people don’t articulate clearly what they want. They put forward certain conditions to the government of Ukraine, but it is not clear to which government specifically it is proposed to fulfill. They voiced various ideas on how to improve this government, but what does Russia have to do with it? The underlined description of the Crimean resoluteness is a significant moment in Putin’s speech.

By the way, although Putin did not directly demand an end to repressions in the eastern regions, it was implicitly read between the lines in his speech. The guarantee of the territorial integrity of Ukraine is that it pursues a humane policy. That is, it was territorial integrity that was made dependent on the observance of human rights and the like.

Ctrl Enter
Noticed oshЫbku Highlight text and press. Ctrl + Enter
We are
Interview of V. Putin to Channel One and the Associated Press AgencyWhat you didn't want to know about England
Military Reviewin Yandex News
Military Reviewin Google News
75 comments
Information
Dear reader, to leave comments on the publication, you must sign in.