The reunification of the Crimea with Russia and the processes of national self-determination in Europe: a new “spring of nations”? 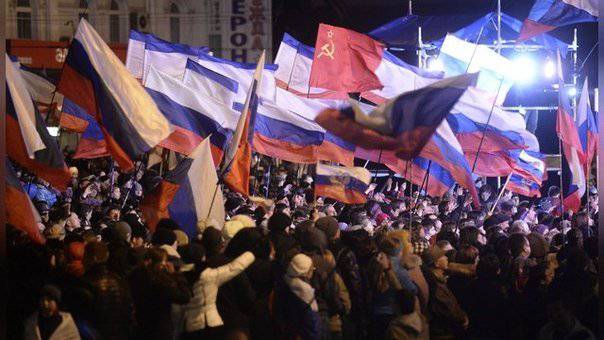 The situation around the Crimea, which arose after its admission to the Russian Federation, for all its current international acuity, is not something completely extraordinary for the European part of the world. In the near future, the attention of the world community may switch to other, perhaps even louder and more unexpected events in terms of self-determination of the peoples inhabiting it.

It so happened that the basic processes of formation of national states in Europe took place after major wars in 70-ies. In the 19th century, Germany and Italy were recreated in this way, new states appeared in the Balkans. Then passed the rapid processes of state formation and the redistribution of borders after the First and Second World Wars. In the 1989-1992, the fourth and, as it seemed, the last wave of the emergence of states in Europe took place, coinciding with the end of the Cold War and the collapse of a number of federations that were part of the world socialist system. In the geographical space where three states (Czechoslovakia, the Soviet Union and Yugoslavia) were in 1989, today there are 23, and from Kosovo and 24 countries. The entire Slavic world, for example, essentially went through the process of becoming a nation-state. Now there are exactly 13, the number, as is known, is unhappy, which gives some experts grounds to even talk about the need to increase it at the expense of the last, deprived of their own statehood and national expression of the Slavic people - Transcarpathian Rusyns.

The fourth wave was largely inspired by the Western grouping of states represented by the United States and other NATO countries, which used the energy of nationalism to weaken their geopolitical adversary. However, the peculiarity of this energy is such that it generates a chain reaction, which is then extremely difficult to stop. Over the past twenty years she has not gone out, and slowly smoldering, waiting in the wings. Two or three generations passed before, before the next territorial division began, but one was enough for a new era. There comes the fifth wave of national self-determination in Europe, not so tightly tied to the accompanying wars. At the same time, it acts in different directions. Some nations, this time mainly in the West, continue to divide, while others, beginning with Russia, on the contrary, unite. At the same time, the Crimea is mainly an echo of the unfinished processes in the 90s, and the main events, apparently, will very soon begin to take place in the “united” Europe itself. Although the Crimean referendum may also serve as a kind of catalyst here, but, in essence, this will be a return wave of the processes that the West itself once launched. Such are the quirks of the goddess of retribution Nemesis.

First of all, the national problems in those European countries that are now in the sphere of influence of the West and which are already a heavy burden on Brussels are again becoming aggravated. They are dangerous because of the greatest threat of forceful development of events. Croats in Bosnia and Herzegovina (B and D) dream of recreating their national formation during the war of Herzeg Bosn or of joining Croatia itself. The Serbs did not at all abandon their plans for their Republika Srpska in B and D to become independent or become part of Serbia. Muslim Bosniaks, revolting on a social basis for several months, not only put forward economic demands, but also consider that their national question has not been completely resolved. Meanwhile, in Sanjak between Montenegro and Serbia, the regional Muslim autonomy movement would be happy to unite with its fellow religious from the north and create Greater Bosnia. The Serbs in Kosovska-Mitrovica are particularly inspired by what is happening in the Crimea and intend to significantly increase their pressure on Belgrade so that it does not leave them under the control of Pristina. Albanians from western Macedonia, who in the 1990 year proclaimed the Republic of Illyrid, now insist on giving it the status of a federal territory. In Bulgaria, the mood is growing that most of eastern Macedonia rightfully belongs to the Bulgarians. While Romania focused on the takeover of Moldova, the Hungarians, themselves “Sekkei,” who themselves had Hungarian passports and required the self-determination of a significant part of Transylvania as an understandable first step towards reunification with their “mother-homeland”, became more active. Similar ambitions of Hungarians are hatching against Slovakia and Serbian Vojvodina. In Poland, the official circles of which seem to be unconditionally supported by the current authorities in Kiev, at the expert level, ideas are being expressed as to whether the time has come for the return of the “Eastern Creces” (Western Ukraine) to the Polish-Lithuanian Commonwealth.

Separatism in Western Europe manifests itself in two forms: it is the rejection of existing state borders (in Belgium, Spain, Great Britain, Italy, France, Denmark, Germany) and the rejection of the European Union itself. A public opinion poll conducted in November in the UK in November showed that a large majority (2012%) would prefer to leave the EU. Prime Minister D. Cameron has already announced that a referendum on this topic will take place. In Germany, a similar survey showed a similar picture: 56% of Germans surveyed believe that they would be better off without the EU. Shouldering ever-increasing new EU commitments to save the drowning of Ukraine clearly reinforce this mood. And the inevitable general deterioration of the economic situation in Europe in the event of the introduction of full-scale sanctions against Russia is capable of putting this integration association at all on the verge of collapse. According to some scenarios, the EU future - for a single federal state, consisting of about 49 national states. This model is based on the ideas of the German politician from the Green Party of Daniel Cohn-Bendit (Daniel Cohn-Bendit) and the former Belgian Prime Minister Guy Verhofstadt, the authors of one of the most popular manifestos for the creation of a federal Europe.

At the level of individual states, as many believe, the collapse of Great Britain is inevitable in the first place. According to Simon Thomas, one of the leaders of the Party of Wales, the referendum on Scottish independence, scheduled for 2014, will be an “icebreaker”, which will be held in all historical the provinces of the United Kingdom. “The declaration of independence will mark the collapse of Great Britain, the country we know today. Scotland is just the most obvious example. However, an equally interesting future awaits Northern Ireland and Wales. ” He believes that if Britain exits the EU, Wales should remain part of a united Europe. Before the Scottish referendum on independence, scheduled for September 18 with. Mr., not much time is left. They are closely watching what is happening in the Crimea. But counterinterest is appropriate. Why is it that what is allowed by one is not permitted to be done by others?

Germany is still braced by the inertia of the recent unification, however, in a more distant future, it does not have immunity from disintegration, since it is cut from too different parts, the colloquial dialects in which are further from each other than, for example, Russian and Ukrainian languages. More and more residents of Bavaria and Baden-Württemberg are unwilling to feed "freeloaders" from subsidized German lands. Thus, a high-ranking member of the ruling Christian-Social Union (CSU), Wilfried Sharnagl, released a sensational book in which he tried to "wake up the Bavarian political establishment, which secretly has long been dreaming of independence."

In Italy, with 1960 – 1970-ies, the League of the North is gaining momentum, whose members dream of leaving “southern idlers, mobsters and hedonists,” and unite hardworking northerners into the Padan republic. Such ideas became especially popular with the onset of the crisis, when the central government demanded that the regions “tighten their belts” and help those in debt to the southern provinces. Separatist tendencies are gaining momentum in the Alpine region of Alto Adige (South Tyrol), populated predominantly by the Austrians and annexed to Italy after World War II. Venice, referring to the tradition of its medieval statehood, already holds a referendum on the creation of a new Veneto country.

In France, in Corsica, in Brittany, Alsace and other provinces, talk of autonomy and even separation from Paris is increasingly heard.

In Spain, Galicia and the Basque Territories are closely watching the movement of Catalonia towards independence. They are ready to rush in the same direction. The Catalan independence referendum is due to take place on November 4 of this year, despite the fact that the central authorities in Madrid declared their disagreement with its holding. Barcelona does not intend to retreat. Here, by the way, is another precedent for the Crimea.

Unsuccessful attempts to keep Flanders and Wallonia in Belgium seem doomed. The capital of the European Union, Brussels, risks becoming an entity with incomprehensible sovereignty.

Those who, far from the Eurasian continent on the other side of the ocean, contributed to the emergence of this energy of self-decay of the states located here, were guided by the principle of “divide and conquer” as old as the world! In the United States, of course, we would like to see the East and West of the continent disconnected. The fact that only the west of Eurasia can suddenly begin to break up, and the east will suddenly move in the opposite direction, was hardly included in their plans. In Washington, however, one was not taken into account. The right of nations to self-determination involves not only the separation of peoples who do not want to live together, but also the union of those who want it. Russia, having suffered from the negative energy of the disintegration imposed on it, finally chose for itself and began a different movement - towards consolidation. That is why such a fierce rejection in the White House causes what is happening now around Ukraine. The strategic plan of the "big game of the continents" is being disrupted. But the whole story says that Crimea is only the first sign.

Ctrl Enter
Noticed oshЫbku Highlight text and press. Ctrl + Enter
We are
Oleg Valetsky about the wars in the Balkans, their causes and Russian volunteersMissed chapter "Strategy-2020"
Military Reviewin Yandex News
Military Reviewin Google News
42 comments
Information
Dear reader, to leave comments on the publication, you must sign in.